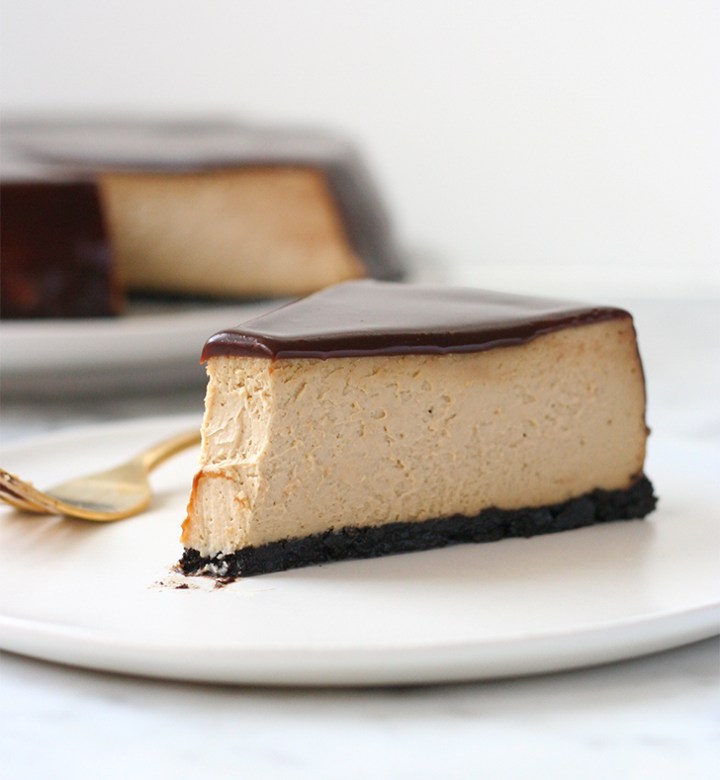 Everyone needs a little pick-me-up. Sometimes it’s a latte. Sometimes it’s chocolate. But what about a recipe with a little bit of both? That’s the thinking behind our espresso cheesecake. We bake it New York-style—extra tall and rich—and make it even more impressive by coating it in shiny chocolate glaze.

The Best Chocolate Recipes in the Whole Entire Universe

1. Preheat the oven to 325°F. Lightly grease the base of a 10-inch springform pan with nonstick spray.

2. Make the Crust: In a large bowl, mix the chocolate cookie crumbs with the sugar and melted butter to combine. Press the mixture evenly into the base of the prepared springform pan. Bake until set, 10 to 15 minutes. Cool.

3. Make the Cheesecake: In a small pot, bring the cream to a simmer over medium heat. Add the espresso powder and stir to combine. Cool to room temperature.

4. In the bowl of a food processor, pulse the cream cheese, sour cream, cooled heavy cream with espresso powder and sugar until well combined. Scrape well after mixing. Add the eggs one at a time, pulsing and scraping well after each addition. Add the vanilla and salt, and pulse to combine.

5. Pour the batter over the cooled crust and transfer to the oven. Once the cheesecake is in the oven, reduce the temperature to 300°F. Bake until the cheesecake is set but still slightly jiggly in the center, about 1 to 1½ hours.

7. Make the Glaze: In a small pot, heat the cream and corn syrup over medium heat. Place the milk chocolate into a small heat-safe bowl. When the cream comes to a boil, pour it over the chocolate. Let it sit for 15 seconds, untouched. Mix the ganache to combine, and pour immediately over the cheesecake. Let set before slicing and serving.

Note: This recipe is for an ultra-tall New York-style cheesecake. You can halve the amounts for the cheesecake custard and glaze (keep the crust amount the same) for a more moderately sized cheesecake. Reduce the baking time to 45 minutes to 1 hour.