In a stunning moment earlier today, September 17, all eight of Queen Elizabeth's grandchildren came together to honor the life of the late monarch with a vigil at Westminster Hall.

Prince William, 40, the first in line of succession to the throne, and Prince Harry, 38, led the procession, walking at the front of the pack.

Two lines formed behind them: On one side stood Princess Beatrice, 34, Lady Louise Windsor, 18, and Zara Tindall, 41, while on the other side was Princess Eugenie, 32, James, Viscount Severn, 14, and Peter Phillips, 44. 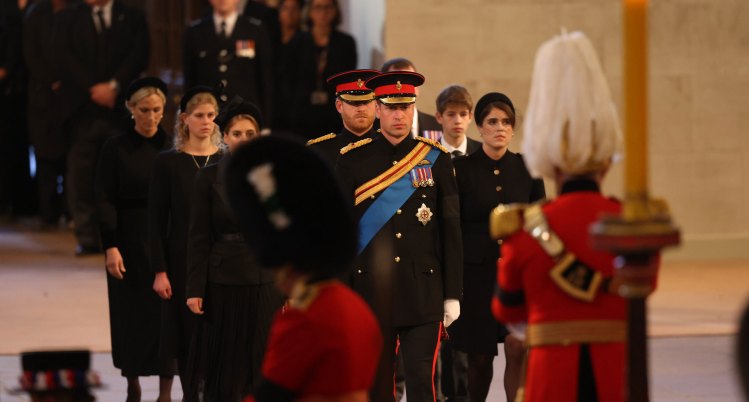 In the photos, the solemness of the moment is clear based on the group's expressions and mannerisms. All were dressed in black, with Prince William and Prince Harry decked out in military garb.

The fact that the Duke of Sussex was dressed in his Blues and Royals uniform was notable, given that he was stripped of his military titles when he and Meghan Markle stepped down from their senior royal positions back in 2020. It was reported by Hello! magazine earlier this week that King Charles made a special request for Prince Harry to be able to wear the uniform for today's vigil without his son's involvement. Thus far, the duke has been dressed in his mourning suit for events related to the Queen's passing. 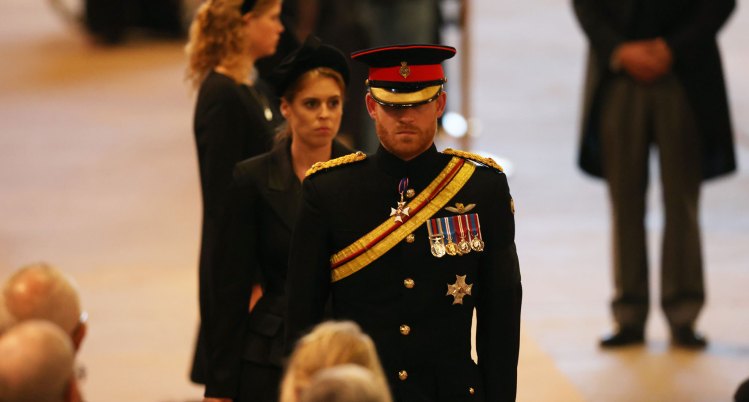 Once the group entered the hall, they gathered around Queen Elizabeth's coffin, where they began a 15 minute vigil of silence. Prince William and Prince Harry were stationed at opposite ends of the casket, while their cousins filled in at the sides.

In a video shared on the official royal family's Twitter account, we can see the cousins bowing their heads and holding their hands in front of them. A source close to the family told PEOPLE: “The grandchildren, at the King's invitation, are very keen to pay their respects, just as their parents are doing the evening before.”

The Queen’s grandchildren hold a Vigil beside Her Majesty’s coffin at Westminster Hall. pic.twitter.com/lChZW6OdIP

On Friday, September 16, the late monarch's four children—King Charles, 73, Princess Anne, 72, Prince Andrew, 62, and Prince Edward, 58—united for their own vigil. Traditionally deemed the ‘Vigil of the Princes,’ this moment was historic in that the princess royal became the first woman to take part in the ceremony.

On Monday, September 19, the family will come together once again for the Queen's funeral, which will begin at 6:00 a.m. EST.