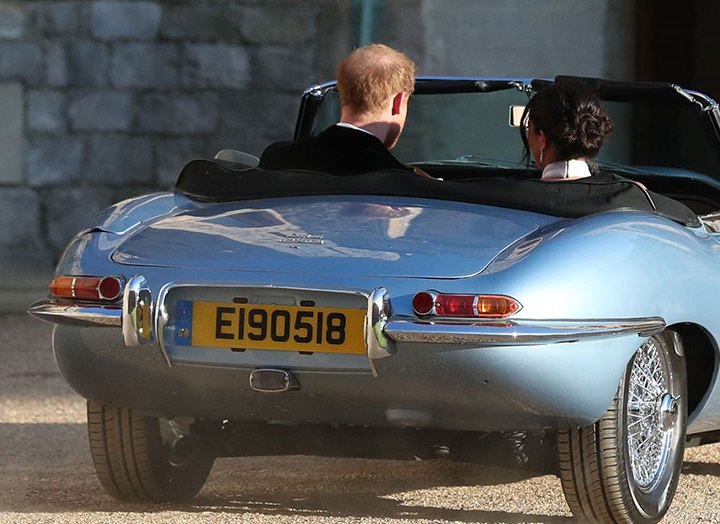 Confession: Meghan Markle and Prince Harry's fairytale wedding still lives rent-free in our mind. And while we can probably tell you every celebrity who attended off the top of our head, we nearly missed a *major* hidden detail from their wedding day.

After the bride and groom said their I do's back in 2018, they rode away in an E-Type Jaguar to attend the evening reception at Frogmore House. And if you take a close look at the car's license plate, it reads, "E190518."

﻿Don't get it? You're not alone. ﻿One fan pointed it out on Twitter and wrote, "I am so embarrassed. I was watching the royal wedding for the 200th time and it’s only now that I noticed the license plate."

For those who are still confused, the numbers actually represent the date of their wedding, so really, it reads as "Established 19th of May, 2018." (We know, we can't believe we missed it either).

But as we've seen in the past, Markle is no stranger to symbolism. When the duchess announced her new series, Pearl, in July, it wasn't long before fans and outlets figured out the connection between the title and her own name. As Hello! magazine pointed out (via The Bump), the name “Meghan” means “pearl.”

In March, when Markle and Prince Harry sat down with Oprah, they revealed that their historic wedding wasn't the first time that they exchanged vows. The duchess revealed, "Three days before our wedding, we got married. No one knows that. We called the archbishop and just said, look, this thing, this spectacle is for the world, but we want our union between us, so the vows that we have framed in our room are just the two of us in our backyard with the archbishop of Canterbury."

Now with three years under their belt, the duke and duchess share two children: Archie, 2, and Lilibet, 6 months.

Excuse us while we go rewatch the royal wedding for the 36th time.