How to Make Latkes for Hanukkah (or Whenever a Craving Strikes)

Hanukkah don’t start ’til a piping hot plate of latkes hits the holiday table. Fact. The crispy fried potato pancakes are downright addictive, and luckily, they’re also a breeze to cook at home. But there are a few key tips for making them flawlessly. Read on to learn how to make latkes, plus what to serve with the iconic potato dish (and how to reheat the leftovers to their former glory).

The Best Hanukkah Food to Make This Year, from Latkes to Brisket 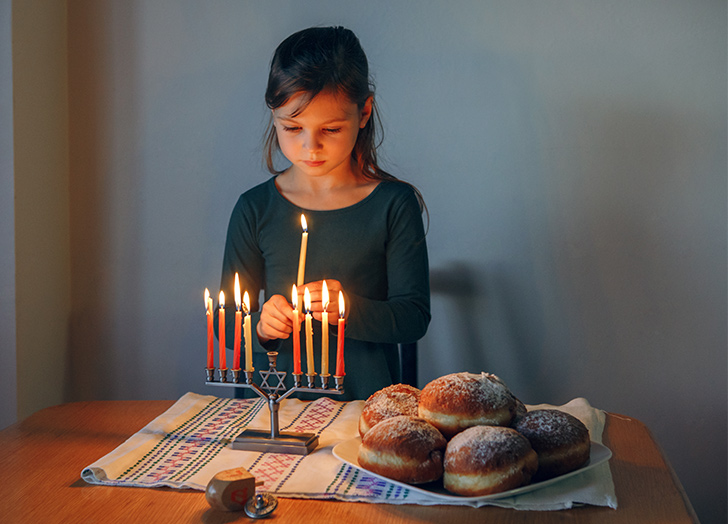 The History Of Latkes

Latkes are traditionally served for Hanukkah, the Jewish holiday also known as the Festival of Lights or the Feast of Dedication. It honors the rededication of the ancient Maccabees’ temple after they revolted against the Syrian-Greek empire in the second century B.C. Legend has it that the Jews only had a tiny bit of oil left when they returned to their temple. Despite barely having enough to light the temple’s candelabrum for a single day, the oil burned for eight—this came to be known as the Hanukkah miracle. Today, many Jews celebrate the eight-day festival by lighting menorahs (one candle on each night) and making foods fried in oil, like sufganiyot (aka jelly doughnuts) and latkes.

How Are Latkes Traditionally Made?

The first latkes date back to the Middle Ages, when they were likely made of cheese, since the potato didn’t reach Eastern Europe until the 19th century. Instead of frying them in oil, most Ashkenazi Jews used schmaltz, or rendered poultry fat, due to its affordability. Since many Jews don’t mix meat and dairy due to religious dietary laws, home cooks looked for alternatives to cheese, like turnips and buckwheat flour. Today, potatoes and neutral frying oil are the standard in most households; the spuds can either be grated or puréed. 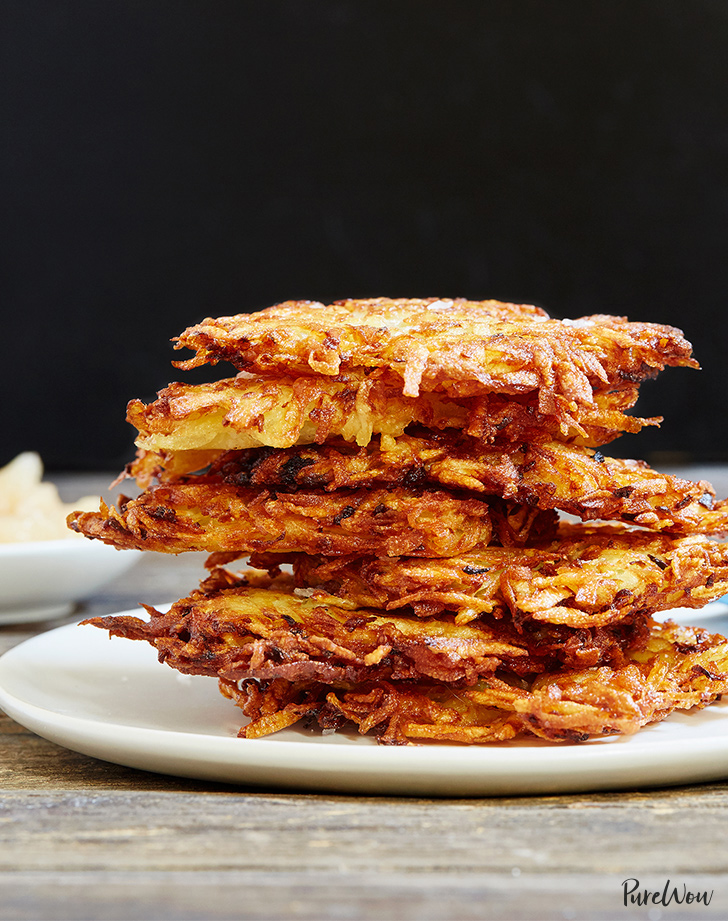 How To Make Latkes For Hanukkah

You’ll only need five basic ingredients to reach potato pancake bliss. The key to making drool-worthy latkes is squeezing as much excess moisture as possible from the veggies before frying them, so they’re super dry when they hit the oil. You can also spice up the O.G. recipe by using different shredded produce besides potatoes (we’re partial to Brussels sprouts, but sweet potatoes, zucchini and carrots work too), adding cheese and fresh herbs to the batter or fancying them up with wintry fixings, like spiced yogurt and pomegranate arils. Regardless of the bells and whistles, here’s how to make a killer batch of latkes for Hanukkah.

Step 1: Place a large, clean kitchen towel on your counter, and place a box grater on top of it. Grate the onion on the coarse section of the grater. Remove the grater, wrap the shredded onion in the towel and squeeze over a large bowl (or your sink) to remove excess moisture. Transfer the onion to a large bowl.

Step 2: If the towel is very damp, open it to a new section or lay down a fresh towel. Grate the potatoes on the coarse section of the grater over the towel. As you finish each potato, squeeze out the moisture as you did with the onion. Repeat until all the potatoes are grated and squeezed. Transfer to the bowl with the onion. Toss the mixture to combine. (Note: If the mixture still feels wet to the touch, dry it one more time.)

Step 3: Add the egg to the bowl and mix to combine. Season with salt and pepper

Step 4: In a large skillet, heat the oil and butter over medium-high heat. Working in batches, scoop ⅓ cup of the potato mixture into the hot oil and butter. Use a spatula to flatten slightly. Cook until golden and crisp, about 3 to 5 minutes per side. Serve immediately. 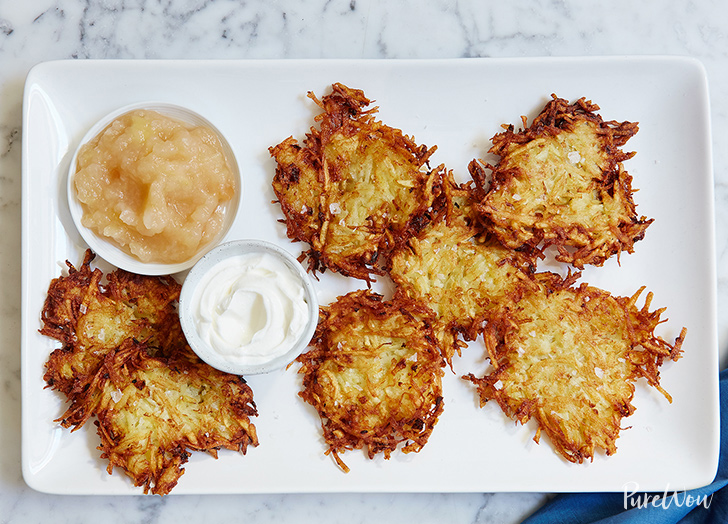 What To Serve With Latkes

Tangy sour cream and sweet applesauce are absolute musts—they offer creaminess and contrast to the crispy, salty latkes. If you aren’t serving them solo, make them part of a drool-worthy Hanukkah spread, complete with brisket, kugel, sufganiyot, challah and matzoh ball soup. You could also throw tradition out the window and serve them as a potato side for any beef or chicken dish or use them in place of hash browns at holiday brunch.

How To Reheat Latkes

If you plan on devouring the leftovers in a timely fashion, keep the latkes in the fridge for a couple of days. If you want the potato magic to last even longer, you can wrap them individually and store them in the freezer for up to two weeks. To reheat them, pop the latkes in the oven at 350°F on a baking sheet in a single layer until they’re crispy again, about 15 minutes.