Brussels Sprouts Latkes Are the Ultimate Side Dish 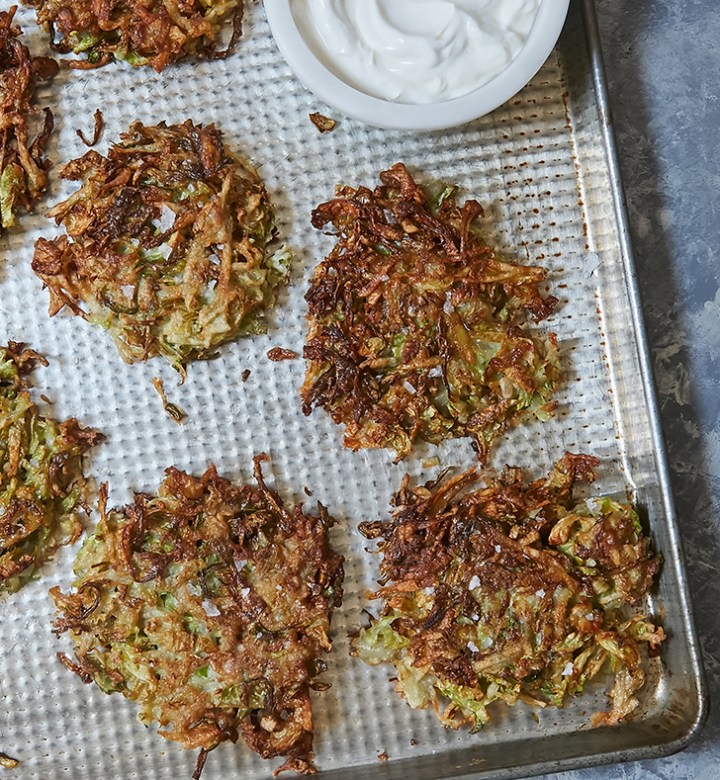 Who doesn't love crisp, golden-brown potato latkes? Well, we took the classic fritters and spruced them up using fall's best vegetable. We present to you brussels sprouts latkes.

7 Unexpected Side Dish Recipes You Need This Thanksgiving

Sour cream, as needed for serving

1. Place a large, clean kitchen towel on your counter and place a box grater on top of it. Grate the onion on the coarse section of the grater. Remove the grater, wrap the grated onion in the towel and squeeze over a large bowl (or your sink) to remove excess moisture. Transfer the onion to a large bowl.

2. If the towel is very damp, open it to a new section or get a clean towel. Place the box grater on top of the towel again and grate the potato on the coarse section of the grater. When it’s grated, squeeze out the moisture as you did with the onion. Transfer the grated potato to the bowl with the onion.

3. In the large bowl, toss the onion with the potato and brussels sprouts to combine. Stir in the eggs, egg white, flour, salt and pepper, and mix until fully combined.

4. In a large skillet, heat 1 inch of oil over medium heat. Working in batches, scoop ½ cup of the brussels sprouts mixture into the hot oil. Use a spatula to flatten slightly. Cook until golden and crisp, 3 to 5 minutes per side.

5. Repeat until all the latkes are made. Serve immediately, garnished with flaky salt and sour cream on the side for dipping.