The Best Fall Foods at Starbucks, Panera & All of Your Favorite Chains

The return of pumpkin spice is more pervasive this fall than ever before, with the cinnamon-laced blend finding its way into everything from wheels of cheese to trash bags. In the first two weeks of September, more than 1,000 “pumpkin” items were added to restaurant menus nationwide, according to SpotOn, a point-of-sale systems company.

But it’s not just pumpkin spiced things; any food with an autumnal spin seems more in-demand than it has been for the past few years. So, uh, why? Well, beyond the get-it-before-it’s-too-late anxiety that a limited-edition treat induces, as economic uncertainty grips the country, those cozy, nostalgia-inducing flavors provide a sense of comfort in the familiar. So, if you could use something apple, cinnamon and/or pumpkin-infused to shake off the Sunday scaries—or simply get you psyched for pumpkin-picking season, look no further: Here are the best fall foods hitting major chains across the country. 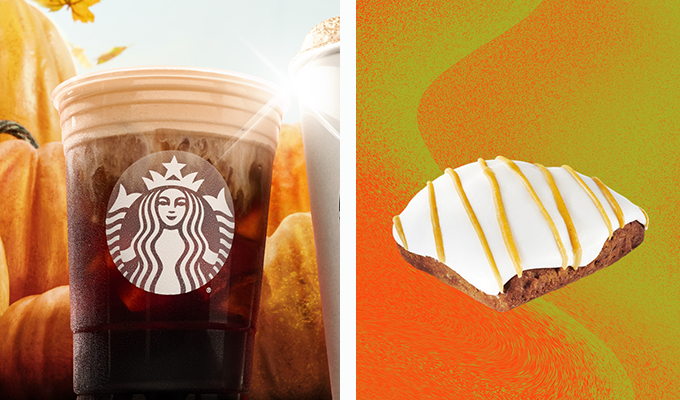 Yeah, yeah, they’re the originators of the Pumpkin Spice Latte hype, but we recommend bypassing the classic in favor of another fall drink: the Pumpkin Cream Cold Brew. The frothy layer of cold foam gradually infuses the cold brew as it sits, making for a less potpourri-tasting drink overall (but still carries the essence of fall in each sip). Pair it with a delightfully crumbly-yet-never-dry pumpkin scone, and you’re one hayride away from the ideal October weekend. 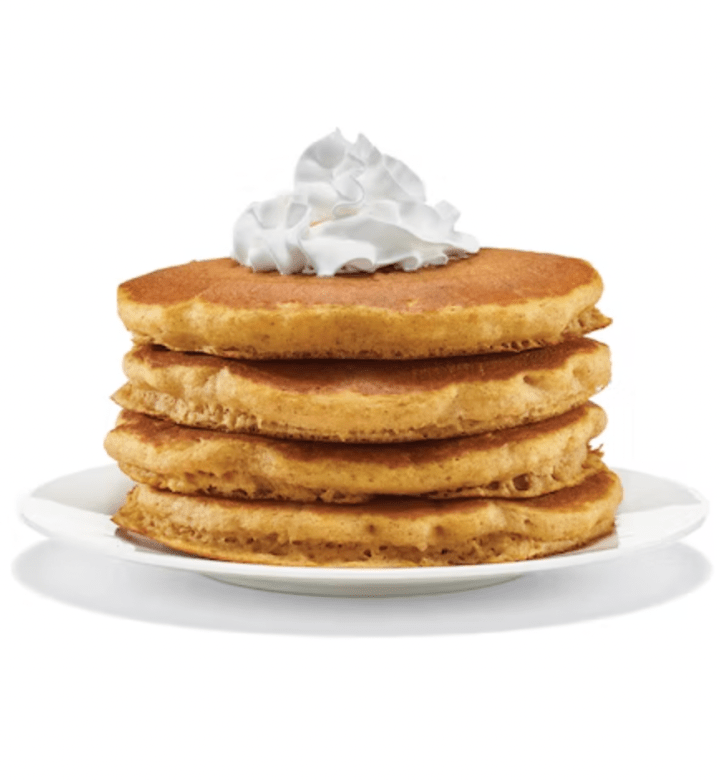 Some companies use “pumpkin spice” as an excuse to add some cinnamon and nutmeg to their standard recipes and call it a day. Not so at IHOP; this alarmingly fluffy shortstack contains real pumpkin, in addition to that fall-famous spice blend. 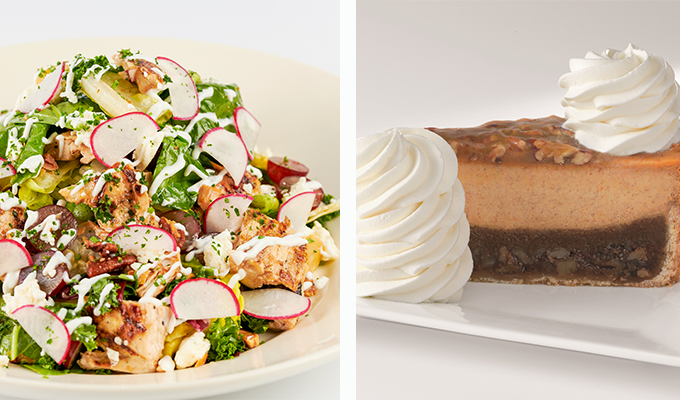 More than a dozen new items have recently been added to Cheesecake Factory’s phonebook of a menu, but there are two we’re eying in particular: the Harvest chicken salad and three-desserts-in-one Pumpkin Pecan Cheesecake. The latter features layers of pecan pie and pumpkin cheesecake, all doused in caramel and chopped pecans. The former is a bed of greens topped with grilled chicken, grapes, almonds, feta and quinoa. Together, they’re a perfectly balanced meal, right?

Psst: Now through October 28, you can receive a free slice of of Reese's Peanut Butter Chocolate Cake Cheesecake or Hershey's Chocolate Bar Cheesecake with an online take-out or delivery order of $40 or more using the promo code TREAT22. 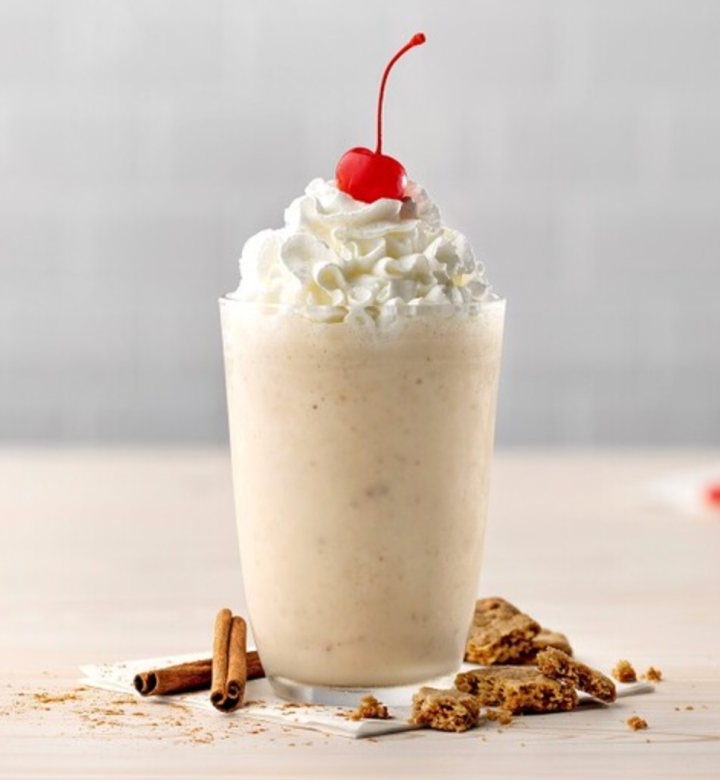 A milkshake? For fall? It might sound wrong, until you take a sip. Chick-fil-A is known for its ultra-creamy (not icy) shakes, and this one’s infused with cinnamon and studded with brown sugar cookies. 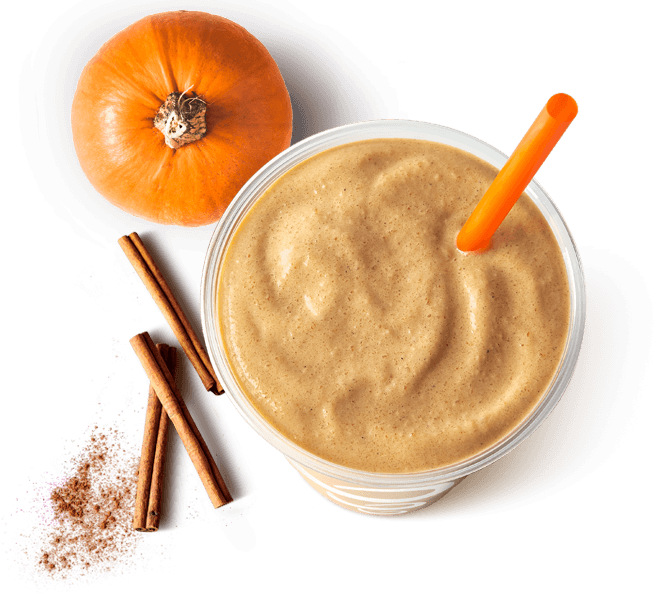 With a 2 percent milk and frozen yogurt base, this drink is more like a milkshake than a smoothie. It’s infused with pumpkin spice, but you can customize it in all kinds of ways, like adding a scoop of peanut butter, frozen bananas or protein powder. 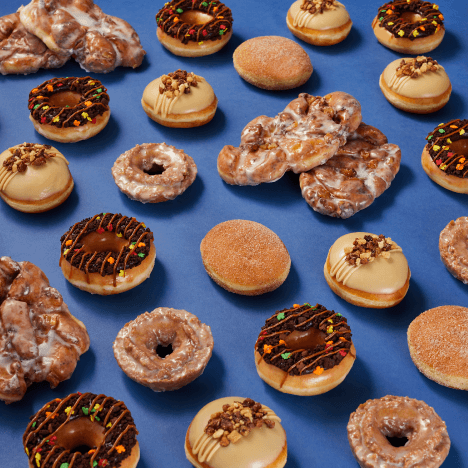 If you’re reading this, time is of the essence: Krispy Kreme’s Autumn Orchard Collection is only available until Oct. 9, so you better hustle to get your hands on the Spiced Apple-Filled Doughnut. It’s a cinnamon-sugar-coated doughnut that’s stuffed with an apple cider filling, basically giving you the best of an apple-picking excursion without having to, you know, pick apples. 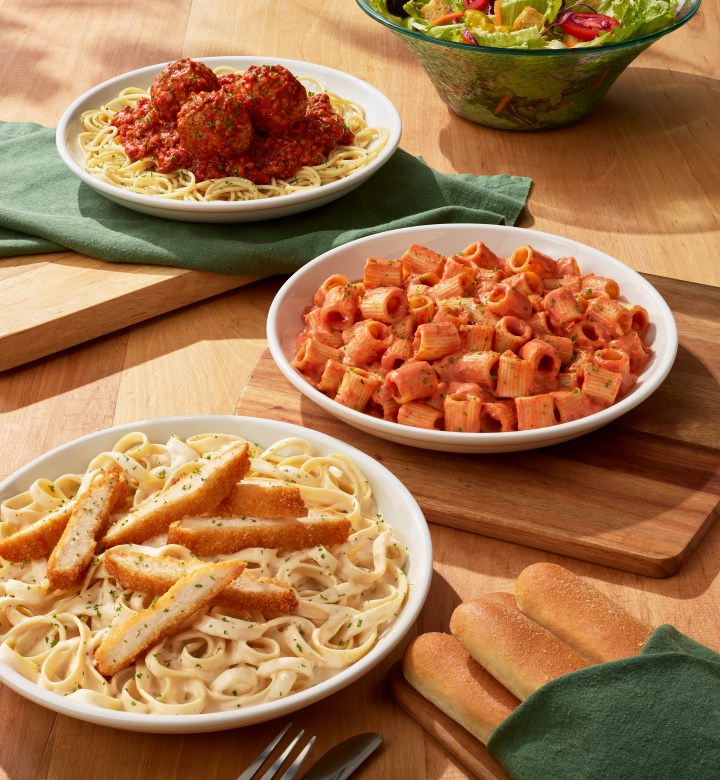 After a two-year hiatus, Olive Garden’s Never Ending Pasta Bowl is back—which means you can gorge on unlimited soup, salad, breadsticks and a number of pasta combinations. While it’s not fall specific, it is classic comfort food, and if your spirit moves you, you can always pair it with the Garden’s seasonal pumpkin cheesecake. (Just note that while the pasta itself is never-ending during your stay, it’s only around until Nov. 20th.) 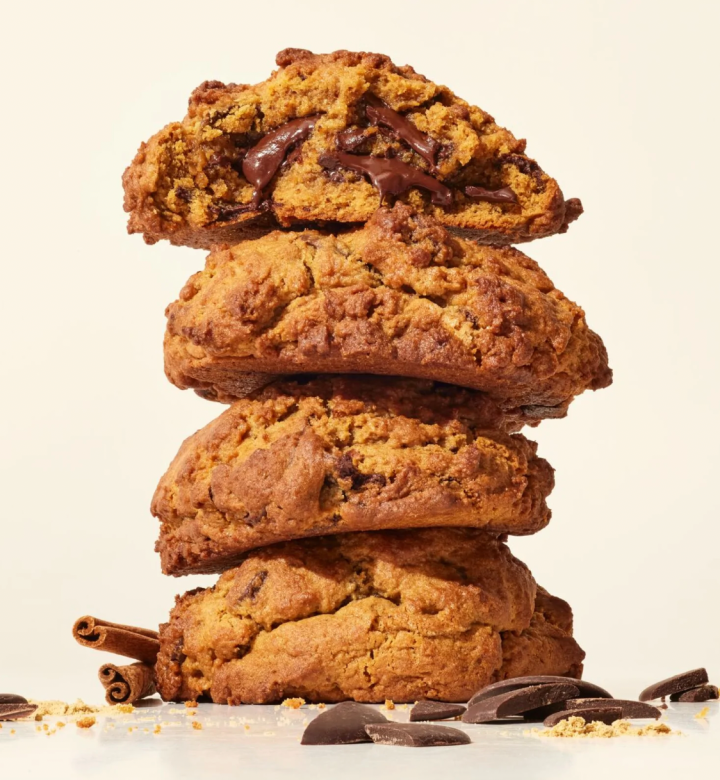 Before you lament that you don’t live in New York, Maryland, D.C. or Massachusetts, and thus cannot enjoy a softball-sized fall edition of your favorite cookie, take note: These babies ship nationwide. So consider that your sign to scoop up a four-, eight- or 12-pack of Levain’s seasonal treat, a chocolate chip cookie suffused with ginger, molasses, nutmeg, clove and cinnamon. 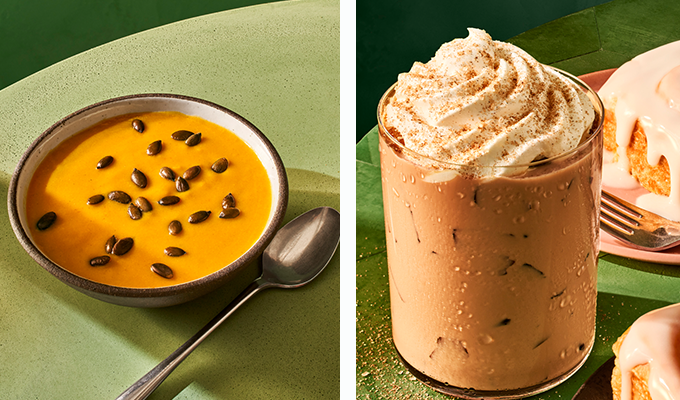 Panera sells 5,000+ Cinnamon Crunch Bagels per hour. So it’s no wonder the company found a way to iterate on its fan favorite, turning it into a cinnamon-infused latte covered with whipped cream and the very same Cinnamon Crunch crumble that makes its bagels so popular. It’s a must-try this fall, along with the restaurant’s Autumn Squash Soup, a blend of butternut squash and pumpkin, which reaches its autumnal apex when simmered with chicken broth, honey, apple juice, cinnamon and curry. Oh, and the whole thing’s crowned with roasted pumpkin seeds. 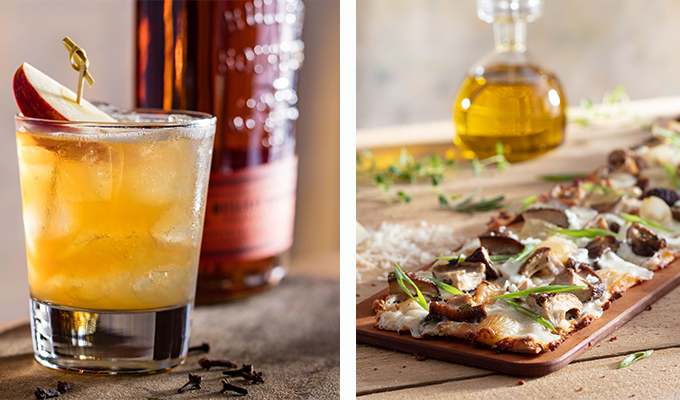 Seasons 52 is known for changing out its menu every three months (‘seasons’ is in the name, after all), but the highlight of its fall menu, for us, is the Roasted Mushroom Flatbread. It brings all the umami notes, combining fungi with goat cheese, green onions and a drizzle of truffle oil. Wash it all down with an Apple Bourbon Infusion, aka bourbon infused with—you guessed it—apple and cinnamon, along with a little lemon and Angostura bitters. 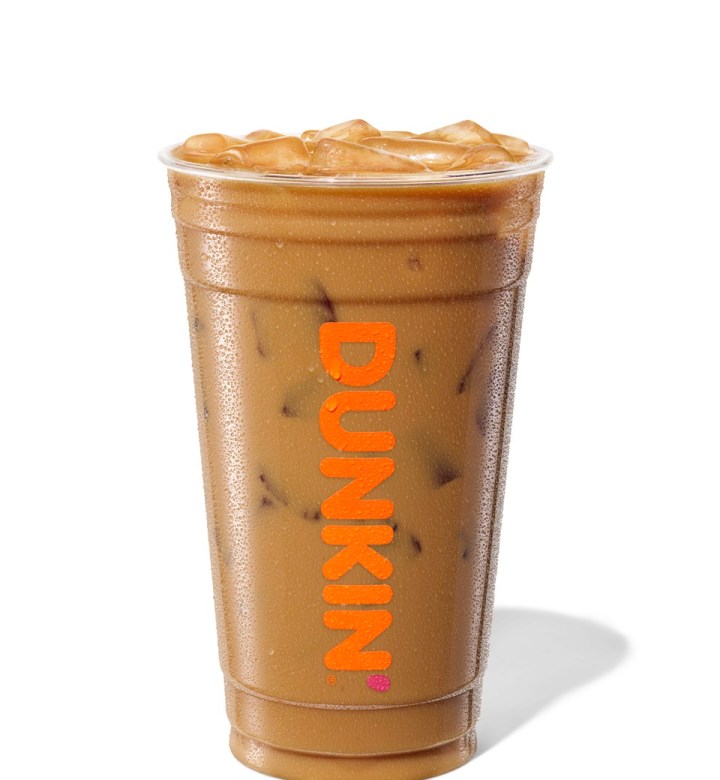 Available hot or iced, Dunkin’s new Nutty Pumpkin Coffee combines the power of pumpkin spice with a shot of hazelnut flavoring, resulting in a coffee that’s like wearing flannel in front of a crackling bonfire while carving pumpkins. Or, you know, a more complex take on a PSL. Pair it with a pumpkin cake donut, and you’ve got a breakfast worthy of David S. Pumpkins. 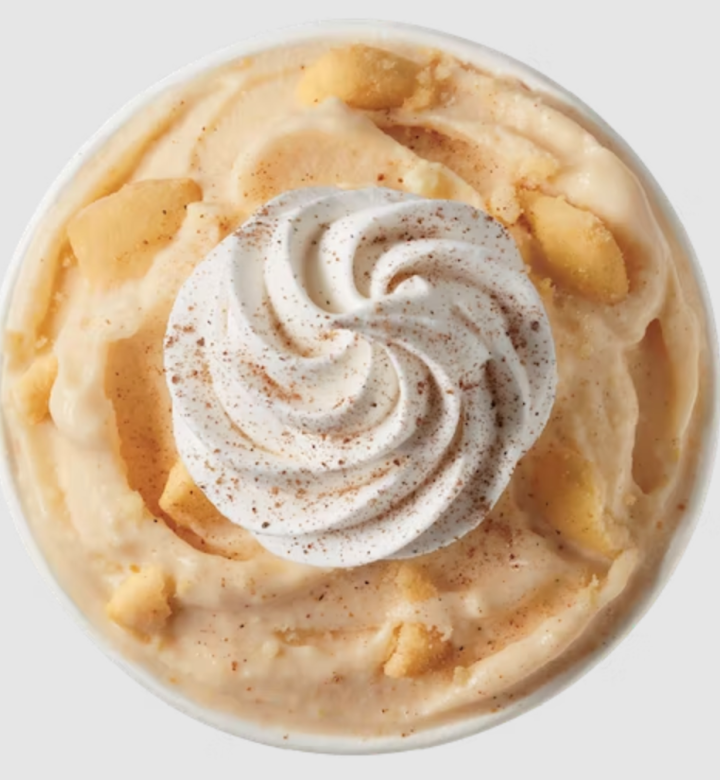 Pie a la mode, DQ-style. It’s the classic vanilla Blizzard you know and love, only substitute whatever mix-ins you get the rest of the year with chunks of pumpkin pie. We aren’t mad about it. Not one bit.