Do You Have to Peel Ginger? Here's Why Our Answer Is ‘Heck No’ 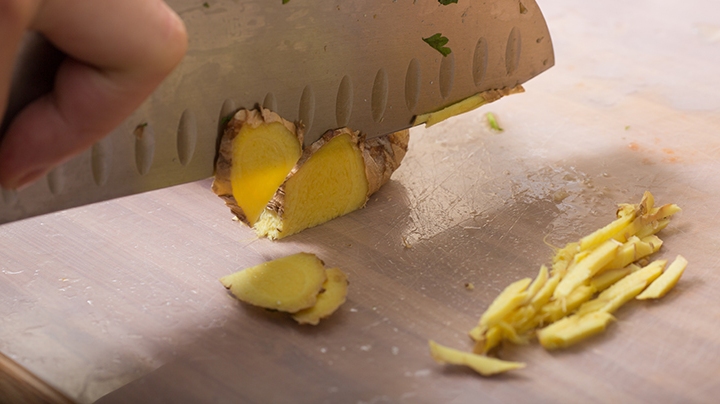 When it comes to cooking at home, one of the biggest obstacles we all face is time—no one ever has enough of it. Even as a professionally trained cook who worked in restaurants and has a secret soft spot for complicated recipes, I’m also all for timesaving tricks that make cooking easier, faster and stress-free. So, do you have to peel ginger? I stopped a longgg time ago, and here’s why you should too.

Peeling ginger is tedious and time-consuming, not to mention a recipe for slicing off a piece of your finger if you’re not doing it correctly. Sure, plenty of “hacks” have surfaced from the internet abyss. Freeze your ginger! Peel it will a spoon! Use a vegetable peeler to awkwardly work around nooks and crannies, wasting a ton of usable ginger in the process! But when did we start peeling ginger in the first place? The skin is paper-thin, but nearly every recipe that calls for fresh ginger says it needs to be peeled. But no one ever gives a reason.

So why exactly did I stop bothering? (And it’s not because I’m lazy, which I’ll admit I am.)

Here’s how I had my epiphany: On two separate occasions, I witnessed fellow food professionals say they don’t bother peeling ginger. The first was cookbook author Alison Roman, while making her internet-famous chickpea stew in a New York Times Cooking video. “I’m not going to peel my ginger,” she says defiantly. “You can if you want, but you can’t make me. The peel on the outside is so thin that, honestly, you won’t know that it’s there.” Home cooks, 1; ginger, 0.

The second was Bon Appétit food editor Molly Baz in yet another cooking video (yes, I watch a lot of these things). While making a spicy marinade for chicken, she somehow captured my feelings exactly: “You’ll notice that I didn’t peel the ginger. Because I never peel ginger. Because I don’t understand why people peel ginger. Someone just decided one day, like, gotta take the peel off, and then everyone started wasting their time with a spoon. When really you could just eat it and you would never know it was there.”

I’ve since tested the no-peel method twice in my own kitchen: once while making Roman’s stew, which calls for “finely chopped” ginger. I simply skipped the peeling process, cutting the ginger into planks, then matchsticks, then mincing it. I also made a pureed carrot-ginger soup and grated the ginger directly into the pot with a microplane. The results? On both occasions, my official taste tester (my husband) didn’t say a word, and I’m guessing he didn’t notice a difference.

If you need more evidence than that, Baz has outlined a few more points that might have you convinced. Not only do you save time or your delicate fingertips, but you also reduce food waste because you use the whole root. And if you’re worried about germs, you can scrub and rinse your ginger just like you would a potato, carrot or apple. That said, if you’re working with some wrinkly old ginger that’s been in your kitchen so long you don’t remember buying it, you’ll probably want to peel it…or buy fresh ginger.

Can You Eat Ginger Skin?

You bet. Let's be honest: The only reason people want to get rid of the skin is because it's tougher. But think about it, when's the last time you ate a big hunk of ginger without slicing or mincing it first? Once it's chopped, you can't even tell the skin is there. Plus, it's got some nutritional value too. The only time you shouldn't eat ginger skin is if your ginger root is super old and knobby. In other words, you shouldn't be eating *any* part of that ginger, skin or no skin.

Reasons Why You Don't Have to Peel Ginger

OK, want the TLDR version? We've got you.

How to Wash Ginger

So, you've finally joined the dark side and no longer peel your ginger. Congrats. That means you'll have to learn how to properly clean it, since you're using the entire root (which has been touched by who knows how many people before you put it in your shopping cart). Not to worry: Here's how it's done.

Ready to cook? Try these recipes that call for ginger:

Here’s How to Grate Ginger Without Making a Complete Mess