Apple Pie with Cheese: The Surprising Story Behind the Iconic (and Polarizing) Combo

Maybe you love it. Maybe you hate it. Maybe you have no clue it’s even a thing. But cheese on apple pie has a long history—and is so beloved that many feel the iconic dessert is incomplete without a cheddar topper. So, why do some Americans love apple pie with cheese? Here’s the lowdown on this unexpectedly delicious tradition, plus a few ways to try it out this Thanksgiving.

The 49 Best Pie Recipes to Make for Every Single Season

Why Is Cheese Served With Apple Pie?

Cheese, specifically sharp cheddar, has been served with apple pie in the U.S. as early as the 1800s. But the combination was likely born in England in the 17th century; a tradition of using dairy-based sauces in pies evolved into an affinity for topping pie with cheese instead.

Atlas Obscura notes examples in literature of poets and authors expressing their love for the combination. (Writer John T. Edge wrote “at lunch or dinner I thought a wedge of pie was naked if it wasn’t crowned with a preternaturally orange slice of cheddar.”) So, not only was it a thing, it was a serious thing. After all, pie on its own (especially apple) was regarded as a symbol of American prosperity. Of course, skeptics and haters have always existed—we guess they liked their pie à la mode. But freezers weren’t common in homes until the 20th century, so a scoop of vanilla ice cream was pretty much out of the question for most families until then. Apple pie also doesn’t taste the way it did back in the day, since apples weren’t actually sweet until the Red Delicious was created in the 19th century.

Areas with lots of dairy farms, like New England, Pennsylvania and the Midwest, became hotspots for cheesy apple pie. Today, the tradition seems to hold strongest in New England (a region that’s also known for both dairy and apple production) and the Midwest, as well as parts of England and Canada. Throughout the rest of the U.S.—particularly the South—it’s not so common. And to some, it’s as polarizing as pineapple on pizza.

But hear us out: This trend makes sense. Think of the filling’s gooey, syrupy sweetness and the buttery, flaky crust. Now imagine what it’s like biting into a wedge of sharp orange cheddar: Salty, savory, nipping sharpness. Put the two together, and it could be the best of both worlds. You’ve had apples in grilled cheese and on cheese boards before, right? This is the same concept, only wrapped in pie crust and made with a lot more sugar and spices. 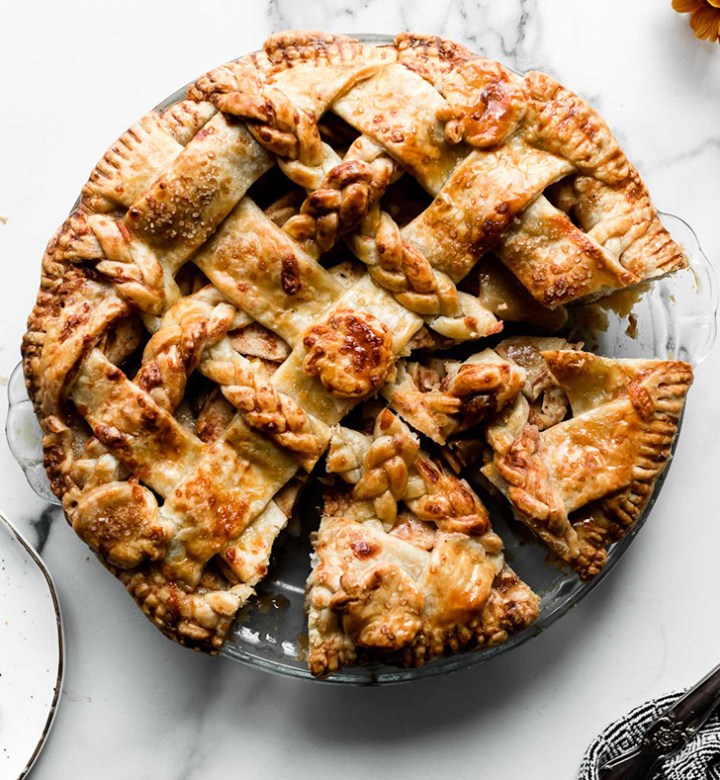 How To Combine Cheese And Apple Pie

The easiest way for first-timers to try this tradition is by simply topping their pie with a slice of sharp cheddar cheese. You can melt the slice on top, keep it cold or serve it on the side. If you want to take it up a notch, you can add cheese to the apple filling or make a savory cheddar crust that no one will complain about.

And while sharp cheddar is traditional (and um hello, delicious), there are plenty of alternate cheeses you can try instead. Gouda offers nutty, caramel-y notes that’ll lend themselves to apple pie quite nicely. Parmesan is just as nutty but turns the salty factor up to the max. Gruyère is earthy, sweet and creamy, making for a complex combination that won’t disappoint. Even Roquefort, an intense, aromatic mold cheese similar to blue cheese, could be worth crumbling over your holiday dessert. Best case scenario, you try cheese on apple pie and are pleasantly surprised. Worst case, you can’t get behind the combo and never try it again. There’s always vanilla ice cream, right?