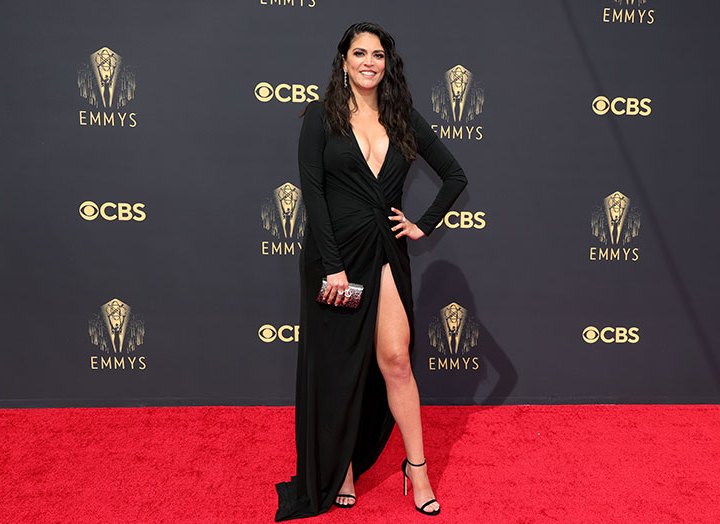 TV's biggest night, the 2021 Emmys, has finally arrived and, as expected, the stars are already stealing the show with their stylish ensembles on the red carpet. But one particular actress who's turning heads is none other than Schmigadoon star, Cecily Strong.

The actress and comedian stepped out in a stunning black gown, complete with a plunging neckline and thigh-high slit. And all we can say is, she definitely understood the assignment.

In case you missed it, the funny lady snagged an Emmy nomination for Outstanding Supporting Actress In A Comedy Series for NBC's Saturday Night Live. This marks her second Emmy nomination in the category.

While speaking with Jimmy Fallon on The Tonight Show about her first nomination in 2020  she said, "I knew they were coming out that day but I was never expecting it. So far from it. Then I got a text from our publicist and she just said, 'Congrats, you were nominated,' and I was like 'For what? What does that mean?'"

Fortunately, the news of her second nomination had a slightly different effect on the 37-year-old actress. While discussing it in a more recent chat with NPR, Strong said, "I'm so proud of the show and being a part of the show. And I think, you know, whatever name is next to an Emmy nomination, it still feels like everybody there is a part of that. The reason there's a nomination is because it was a really strong year during a really tough time. And it wasn't easy to do this job this year. And I'm so proud of everybody."

Fingers crossed that Strong gets her first Emmy win tonight!

All the Must-See Looks from the 2021 Emmys Red Carpet

Get Ready: 1800s Fashion Is Having a Moment Thanks to These Badass Characters