How Many Dog Breeds Are There? 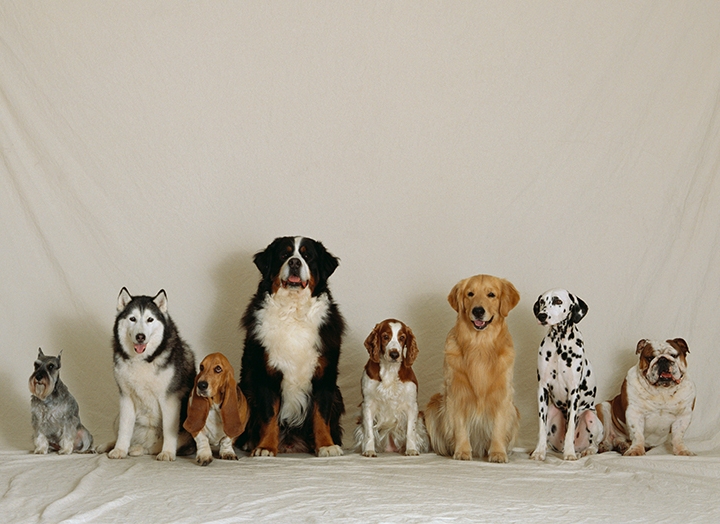 Anyone who’s read the results of a doggy DNA test knows our canine BFFs are more complicated than they appear. Many dogs, especially adopted shelter pups, have traits passed on by several breeds. With 350 dog breeds recognized by the World Canine Federation, the combinations are endless! Purebred dogs are a different story. These are canines who have been closely monitored by humans over generations to ensure those doggy DNA tests come back with a single result. As of January 2022, there are 199 dog breeds recognized by The American Kennel Club.

What are dog breeds?

To the untrained eye, a dog breed is just the way a certain dog looks. Pointed, wolf-like ears, thick black and white fur with a curly cue tail? Loves the snow? Pulls a sled? Gotta be a Siberian Husky. Wrong! It’s an Alaskan Malamute, and the two are distinct, unique breeds with vastly different characteristics.

The AKC says a breed is a breed when the dogs “breed true.” Basically, when two purebreds breed a litter, every puppy is “instantly recognizable” as the breed. For instance, Alaskan Malamutes are larger than Siberian Huskies, with broader muzzles and ears that point forward.  If you breed two Malamutes, you’d see consistent, matching physical traits and temperaments. If you breed a Malamute with a Husky, the result would be a litter of pups in a range of sizes with a variety of muzzle and ear shapes.

How many dog breeds are there?

This is a tricky question with a few different answers. The AKC only recognizes 199 dog breeds. The The Kennel Club in the U.K. recognizes 222 dog breeds. The Société Centrale Canine in France recognizes 330 dog breeds. As you can see, there are more breeds than the ones officially recognized by certain organizations. Some breeds are acknowledged, but don’t exist in numbers high enough to warrant official recognition.

Founded in 1884, The American Kennel Club’s mission is to “advance the study, breeding, exhibiting, running and maintenance of purebred dogs.” This is pretty much the goal of all dog breed governing bodies like The Kennel Club of the U.K. and the World Canine Organization. Each country’s club has its own set of rules and regulations when it comes to recognizing new dog breeds. Above all else, the humane treatment of canines comes first.
The AKC runs many nonprofits improving the lives of dogs everywhere. The AKC Canine Health Federation grants funds to scientists studying canine health and The AKC Rescue Network helps rehome and house dogs in need, just to name a few. We wouldn’t be where we are today without dogs, and The AKC recognizes that by doing everything they can to guarantee safe breeding practices and humane treatment of all dogs.

How are new dog breeds established?

Since dogs and humans bonded over survival and friendship thousands of years ago, we’ve been breeding them. Initially, humans focused simply on ensuring the reproduction of dogs who helped them survive. Think: Azawakhs who hunted antelope for food and protected their Tuareg families in North Africa. Eventually, humans improved their breeding skills and bred to achieve particular traits and personalities. Think: German Wirehaired Pointers who were bred specifically to excel at hunting in harsh fields, unlike German Longhaired Pointers who were bred to hunt in watery marshlands.

To be recognized in the U.S. by the AKC, a “parent club” must exist. These are groups of people dedicated to tracking bloodlines, writing breed standards and ensuring healthy practices among breeders. For example, The Alaskan Malamute Club of America maintains meticulous records about the history of Malamutes, information on how to provide the best care for them, education for show judges, lists of reputable breeders and much more. All in the name of celebrating and honoring Alaskan Malamutes!

Each recognized dog breed also requires a breed standard. Breed standards are determined by parent clubs and contain information outlining things like the breed’s physical characteristics, demeanor and gait. According to The Alaskan Malamute Club of America, an ideal Mal’s head is “broad and deep, not coarse or clumsy, but in proportion to the size of the dog.” Breed standards are incredibly detailed and can even include notes on a pup’s expression! (Malamutes should have a “soft” expression that “indicates an affectionate disposition.”)

These standards are the blueprints judges use in events like The National Dog Show presented by Purina. We all cheered when Claire the Scottish Deerhound won Best in Show last fall. Claire received this title not because she was cuter than her competition—that’s too subjective! Claire won because she was the dog best aligned with her breed standard.

Finally, there’s got to be more than a few individual dogs to be considered a breed. If this weren’t the case, the first few all-red setters born to Irish Red and White Setters in the 1600s would’ve counted as a new breed. Instead, people spent generations breeding just those red setters because they liked the color. In 1882, a Red Setter Club formed in Ireland. By 1891, the Irish Setter Club of America was in full swing, with breeders consistently producing all-red Irish Setters with “rollicking” personalities.

Dog breeds are classified in one of the following groups, based on what they were bred to do:

When deciding what type of dog to get, it’s super helpful to discover more about a pup’s breed. Purebred dogs can be easier to predict, though every dog is unique. If you know you want a dog who can travel with you anywhere and stick by your side, a Toy Group breed is ideal. Folks looking for a large, protective pet may want to check out Working Group breeds.

For anyone who has adopted a pup from a shelter, doing a doggy DNA test can illuminate potential health issues your dog may have. It could also be a fun way to bond with your pet! Learning about a dog’s history can help you adjust training techniques and daily routines. Remember, at the end of the day, it’s all about providing dogs with the tools they need to be the happiest, healthiest version of themselves—regardless of breed.

family
by PureWow Editors
The Best Dog Clothes for Large Dogs, Because Even the Biggest Pups Need to Feel Cozy
family
by Abby Hepworth
The 66 Best Gifts for Dad That He'll Actually Use (& Won't Abandon in the Garage)
family
by Emma Singer
The 24 Best Spring Break Destinations for Families
family
by Dara Katz
It’s Super Subtle, But Psychologists Really Want Divorced Parents to Stop Saying *This* to Their Children
family
by Emma Singer
29 Birthday Party Games for Kids to Get the Party Started (And Keep It Going)
family
by Greta Heggeness
Here Are the Most Popular Girl & Boy Dog Names of 2022