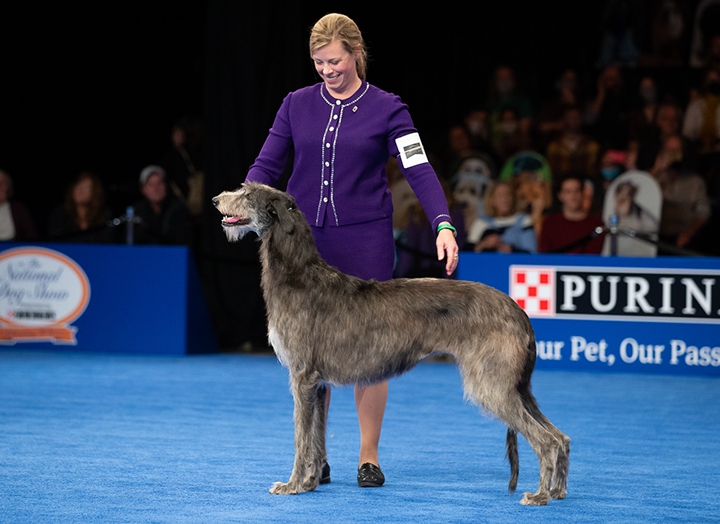 The best part of Thanksgiving? Besides all the Black Friday and Cyber Monday sales, it's The National Dog Show presented by Purina! Nothing compares to watching cute canines display their best features—on their best behavior—to compete for Best in Show. There’s a reason 25 million people tuned in last year. This year, in a twist we all should have seen coming, Claire the Scottish Deerhound earned the Best in Show title for the second year in a row. Naturally, we’re curious what it takes to win twice and are now obsessed with Scottish Deerhounds. Here’s everything you need to know about this majestic breed.

All about the Scottish Deerhound

Called the “Royal Dog of Scotland,” Scottish Deerhounds have been around forever. The Scottish Deerhound Club of America says it’s unclear if they are direct descendants of Irish Wolfhounds or if the hounds who lived with the Picts, an ancient group who existed in the early Middle Ages. In the 16th and 17th centuries, Scottish Deerhounds were well-known as dignified, loyal family members and excellent hunters of giant wild red deer. These deer can weigh up to 500 pounds. So, yeah, the dog who goes after them needs to be large and fearless.

When it comes to being a watchdog, Scottish Deerhounds fail miserably. They are sweet, social pups who willingly welcome strangers into their home (because everyone is a friend). This doesn’t mean you can skip socialization—puppies should be introduced to new dogs and people regularly to get them used to being around others.

Two things ensure a happy, healthy Scottish Deerhound: an open space for running and a puppy playmate. These dogs do best when surrounded by others (people and pups) and when they can run freely. A small yard or apartment definitely won’t cut it. Unfortunately, they’re not fans of fetch or leashed jogging. Taking your Scottish Deerhound to a big park or field every day is a must. Even as they age, free runs are necessary to keep them mentally and physically fit.

Similar to other large breeds, like Great Danes, Scottish Deerhound puppies shouldn’t be excessively exercised until about 18 months old. Their tiny joints need time to grow! The good news is grooming is a cinch. Scottish Deerhounds have wiry coats that actually look good when windswept (jealous!). A good brushing once per week is plenty, just to get any knots out.

More than anything else, Scottish Deerhounds are sensitive, optimistic creatures. Pretty impressive humility considering their regal stature and strength.

A little bit about Claire

“She is just the picture of elegance,” said judge Karen Wilson last year when GCH Foxcliffe Claire Randall Fraser, aka Claire, won Best in Show. Which makes sense considering Claire’s genes. Her mom won second place in 2015 at The National Dog Show and her grandmother won Best in Show in 2011 at the Westminster Kennel Club Dog Show in New York. Kind of a powerhouse family.

Beyond that, Claire’s got great owners and a terrific handler. Cecilia Dove, Robert S. Dove, DVM, and Angela Lloyd co-own Claire and several other pups. Ms. Lloyd acts as Claire’s handler. She’s been working with the same Scottish Deerhound bloodline for 13 years, so she understands the breed inside and out. Ms. Lloyd says her dogs’ happiness and health always come first. “I don’t think about [winning again],” she says. “I was thinking more about keeping her happy, getting a really good performance out of her and just having a good time.”

On a typical day at home in Flint Hill, Virginia, Angela says Claire gets up early and immediately wants to exercise. “She goes for a run, which is probably across 56 acres or so with a river that runs through it, so it’s a big jaunt for her and her kennel mates. We do that every day.”  After Claire’s morning run, she has a big breakfast and an even bigger snooze, before heading outside again in the afternoon.

It’s clear Claire enjoys the spotlight. She made sure to say hello to everyone crowding around her after her big win, accepting congratulatory head pats with a big smile. Claire’s got that signature Scottish Deerhound grey, wiry coat. She’s super tall and holds her head high. Her 2021 Best in Show title makes Claire the top winning Scottish Deerhound in history.

“Claire in her mind really believes in herself and has a lot of confidence in who she is,” Ms. Lloyd says. “And if you looked like her, wouldn’t you?”