Barbie Is Suddenly Everywhere—What Does That Say About Millennials?

Nobody puts Barbie in a corner. OK, maybe you do when you go through your angsty teen years, desperate to prove you don’t play with dolls anymore. But, if 2022 has taught us anything, it’s that Barbie never really leaves us. And right now, she’s experiencing a comeback unlike any other.

First, there was the fuchsia-on-fuchsia Fall 2022 Valentino haute couture show, where the bold shade of pink reminded everyone of a certain Barbara Millicent Roberts—and put #Barbiecore, an equally bold fashion movement, into the mainstream. (An aesthetic Nicki Minaj has been rocking for years, BTW.)

That was only compounded by the slow dopamine drip of photos from the Barbie set, a live action production starring Margot Robbie and Ryan Gosling, directed by Greta Gerwig—with a plotline that’s become almost cheekily under wraps. (Little is confirmed, beyond that it’s about a doll who’s forced to leave a place called Barbieland due to her imperfections.)

Right on the heels of all that hype, Mattel has officially brought back its best-selling doll of all time—Totally Hair Barbie, which raked in $100 million in its first year on store shelves. While this iteration doesn’t come with a squeeze tube of Dep hair gel for puffing out her bangs like the 1992 original, it does feature four variations on the toy, with different body types, hair colors and skin tones to be more inclusive. The reboot is timed to Totally Hair Barbie’s 30th anniversary, but it feels almost divinely orchestrated: The most iconic Barbie of millennials’ lives hits stores right as many of them have children of their own of Barbie-playing age, and while the #Barbiecore aesthetic is at its definitive, late-summer peak. All of which begs a two-fold question: Why now, and what does it reveal about us? 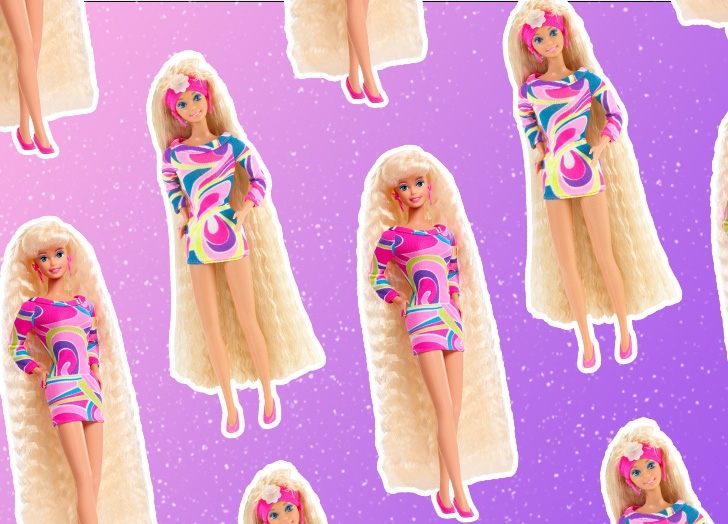 How Barbiecore Took Off

When unpacking Barbie’s resurgence among millennials and Gen Xers, a few themes immediately emerged. First, the obvious: ‘90s fashion is back, big time, and who rocked more neon than Babs herself? (Because it’s specifically the magenta-and-yellow Spandex-rocking Barbie of that era that’s become our cultural muse du jour, not the heavy-lidded siren of the early ‘60s.)

Second, there’s the nostalgia play—after two years when reality felt, well, all too real, we’re harkening back to a simpler time in our millennial history. Specifically, the playground era, when our biggest problems involved rummaging the sofa for Rollerblade Teresa’s flickering right skate. Which dovetails into the third: escapism. Barbie’s world is a fantasy land, and entry into it is as easy as swiping on a Malibu Barbie eyeshadow palette or rocking a pair of platform jelly heels. Like the dress-up days of your childhood, you can instantly be a different version of yourself—one that’s still relatable and familiar, just with a glamorous twist to shake up a gray world.

That’s where the trend gets really interesting. The most extreme, bubblegum version of Barbie’s look is what’s taking off, and it’s something we ‘90s babies adored at the time, but now have to grapple with when it comes to our own kids. Do we give our daughters Barbies? And if so, how do we explain this grotesque version of femininity?

“I lived for her hair—I wanted to live vicariously through that hair,” one Rhode Island mom remembered of Totally Hair Barbie. But still, “I wouldn’t buy it for [my daughter],” she said, citing concerns about the emphasis on outward appearances. (To be fair, a 2006 University of Sussex study found girls who played with Barbies tended to want to be thinner than those who didn’t.)

There’s also the worry that a doll who can do anything and has everything (the Dream House! The convertible! The ultra-thick hair to her toes!) only adds to the pressure women face to be all things to all people. “I actually found it more stressful when they started rolling out Barbies for every career and hobby,” says Jillian Quint, PureWow’s Editior-in-Chief. “I was like, oh great, now she has to be beautiful and a neurosurgeon and doing step aerobics in her off-hours?!” 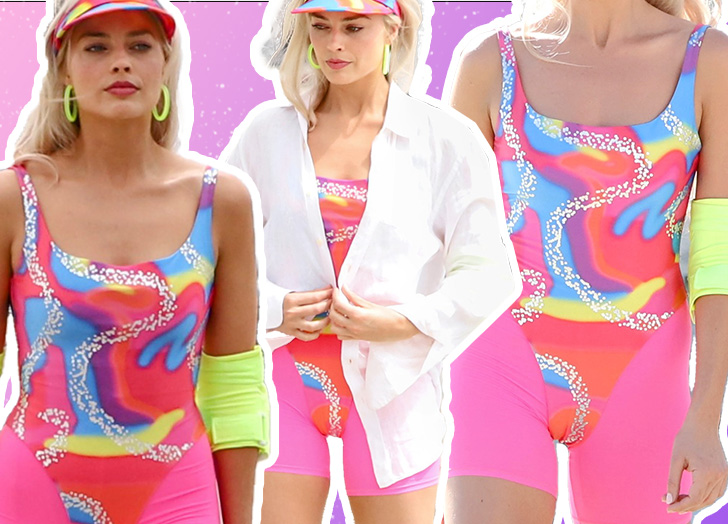 On the flip side, there are the millennials and Gen Zers who maintain that a little Barbie never hurt nobody and are fully leaning into the aesthetic themselves, some going so far into #Barbiecore as to reclaim the word “bimbo” as a positive thing. (The idea being that wearing bright pink or miniskirts has no bearing on your intelligence, nor does it mean you’re dressing specifically for a guy’s attention.) As such, liking Barbie these days is almost an act of subversion; it’s saying, “You may think you know me, but there’s so much more than what you see on the surface.”

After all, we never truly know Barbie: “At her core, she’s just a body, not a character, a canvas upon which society can project its anxieties about body image,” wrote Time in its 2016 cover story. It marked a pivotal moment in Barbie history, when the brand gambled and launched three new body types—petite, tall and curvy—redefining what Barbie could look like.

Since then, that definition has only expanded; she’s had more than 200 careers and, as of 2020, the Fashionistas line featured nine body types, 35 skin tones and 94 hairstyles. “Barbie is always evolving,” Kim Culmone, SVP and Global Head of Design Barbie & Fashion Dolls at Mattel, told PureWow. It’s that constant evolution that makes her both “timeless and timely.”

Over the years, Barbie has become less of a blank canvas and—to put it in today’s social media-fueled parlance—more of a filter through which to view the world and be viewed by it. When you lean into the Barbiecore aesthetic, you’re as eye-catching as the doll, and yet, if you start feeling pigeonholed or stuck in life, reinvention is only an outfit change (or hairstyle) away. 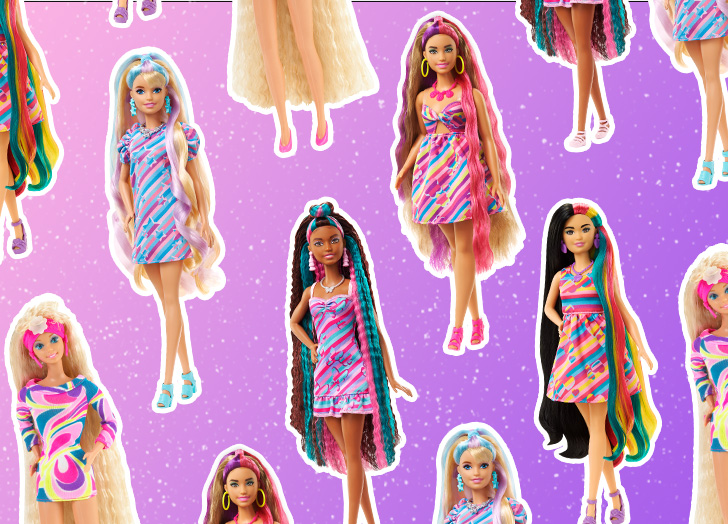 All of which brings us back to Totally Hair Barbie. Why did that one, in particular, resonate so deeply?

“Hair plays such an important role in who we are and how we present ourselves to the world,” Culmone tells us. “I think people really loved the dramatic hair length and styling options of the original Totally Hair doll. It is undoubtedly iconic and was certainly aspirational.” (Indeed—going back to that 2016 Time story, many kids chose their favorite Barbie based on hairstyle, not clothes or body type.)

Sharing the original commercial on YouTube with friends and colleagues drew immediate—and fervent—responses. Almost everyone admitted to cutting her Rapunzel-like hair at some point, which was part of the reason many cited her as a childhood favorite. “You couldn’t cut your American Girl doll’s hair, but you could cut hers,” one friend reasoned. It was liberating. It was low-pressure.

“Our goal is to be like, ‘Whatever you’re thinking, we’re going to give you something totally different—the thing you didn’t know you wanted,’” Robbie told The Hollywood Reporter of her forthcoming movie.

And maybe the same could be said of anything Barbie in a post-pandemic, post Me-Too world. You thought you wanted a pretty doll to look at…but really you wanted to cut all her hair off and drop her off your brother’s top bunk. You thought you wanted a matching neon psychedelic mini-dress, but really, you wanted to wear something gloriously funky without getting catcalled on the street or scolded by your mom (even if, yeah, in hindsight, it is super annoying to have to readjust that skirt twelve times a minute).

Maybe all this Barbie-love isn't anything new at all. Maybe for millennials, it's who we've always been. Totally.

5 Mistakes You're Probably Making with the Family Holiday Card, According to a Professional Photographer 

72 Gifts for Teens That Are Actually Cool, According to Real High Schoolers