Hearing the sizzle of a hot comb on my hair for the very first time was a rite of passage for me. At just eleven years old I sat stiff-necked in a salon chair, with the smell of smoky hair and Blue Magic hair grease in the air. Despite the occasional burns, I was thrilled to get rid of my fuzzy kinks. I’d already bought into to the false notion that straight hair meant “good hair.” Sleek, silky ponytails that bounced were what the boys liked. It was how literally every other girl in my class wore her hair. Meanwhile, I rocked crooked cornrows and thick pigtails with over-the-top hair accessories.

So naturally, I begged my mother to let me perm my hair like everyone else—but she wasn’t having it. Without hesitation, she refused, explaining that the chemicals would make my hair fall out. But thankfully, she did settle for a compromise: letting me get a silk press.

This marked the beginning of a tradition of sorts, where my mom would break out the hot comb (or send me to the salon) for special occasions like picture day or graduation. I became familiar with the burning smell of a greasy hot comb, and I learned fairly quickly that if I wanted this style to last, I had to avoid water like the plague. But it was only a matter of time before the excessive heat took its toll on my strands.

Fast-forward to nearly two decades later, and as I'm watching Oprah Winfrey detail her own experiences with the hot comb on Hulu’s The Hair Tales, I'm struck by the similarities. I’ve perhaps never felt so seen.

In case you’re unfamiliar with The Hair Tales, the docuseries, which is available to stream on Hulu and the OWN app, revolves around a diverse group of six Black women, who share the intimate details of their natural hair journey, including Oprah Winfrey, Issa Rae, Ayanna Pressley, Chlöe Bailey, CHIKA and Marsai Martin. But these episodes aren’t just personal stories. They dive into the complexity of Black hair and the history of the natural hair movement in America, detailing how it became a form of resistance in a world that saw afro-textured hair as unattractive.

In the series, Tracee Ellis Ross poses a series of insightful questions, allowing these women to open up about their hair journeys and tackle topics like hair discrimination and texturism. I got to see the first three episodes, which focus on Winfrey, Rae and Pressley, and they speak to how Black women share a similar (and often painful) history when it comes to their hair. It starts with being told that natural hair is unmanageable, unacceptable and not pretty enough. And this in turn prompts young girls to endure chemical burns and excessive heat to conform to society’s warped standards of beauty, just because they want to fit in. As Rae puts it in episode two, “It was painful to know that the hair growing out of my head wasn’t socially accepted.”

Fortunately, the natural hair movement, which inspired the CROWN Act legislation in 2020, has already done plenty to help shut down these damaging ideas. But as Dr. Joan Morgan, Program Director at the Center for Black Visual Culture, says in episode three, we’re still navigating the ripple effects of those harmful beliefs. "How does our hair respond to the many demands of the many spaces that Black women occupy, from the Senate to the church to the bedroom to various workplaces?” she says. “I think that we are always trying to walk this tightrope between being accepted in those spaces, but also finding styling that makes us feel good about ourselves.” 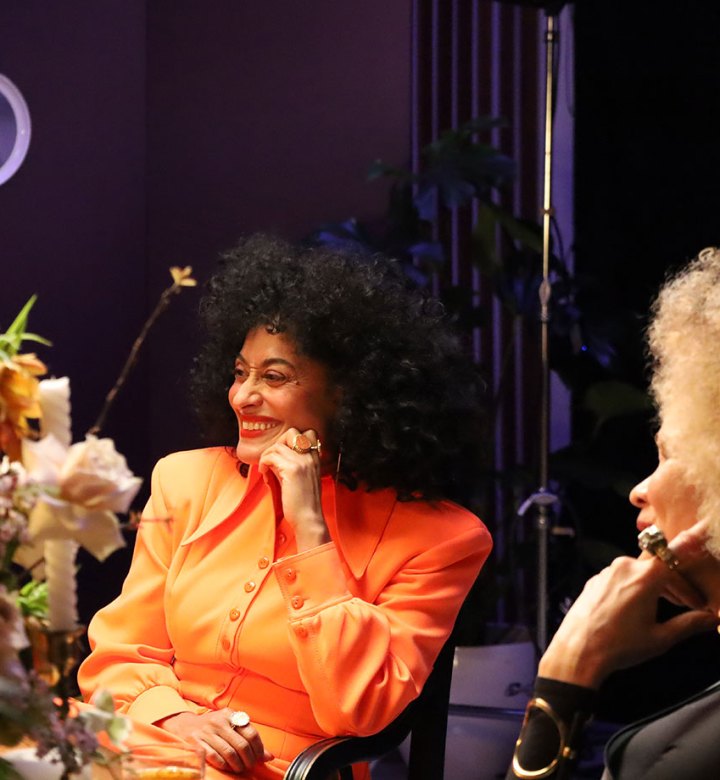 All throughout my childhood and during my adult years, I found myself trying to balance on that tightrope. Because I was already aware that my hair wasn’t just hair. It was tied to my self-worth and my identity. It was my “crown and glory,” as they say. And I’d seen enough to understand that the longer and straighter my hair was, the easier my life would be. Straightened hair got me more attention at school and earned more compliments from strangers. But as you can imagine, after all that heat, my hair didn't fare well. While in high school, I distinctly remember trying to cling to my hair's length, even though the ends were thinning. And finally, after one salon visit, I wound up losing nearly half of my hair due to split ends and heat damage.

On the series, Winfrey opens up about losing all of her hair as a result of a perm gone horribly wrong, while Rae reveals that she experienced hair loss after getting her first relaxer. As heartbreaking as it was to hear about these traumatic hair experiences, it was empowering and oddly comforting, as someone who has shared these experiences for the sake of fitting in. But the absolute best part was getting to witness how their hair has bounced back and thrived since then—fittingly an accurate reflection of their own growth. 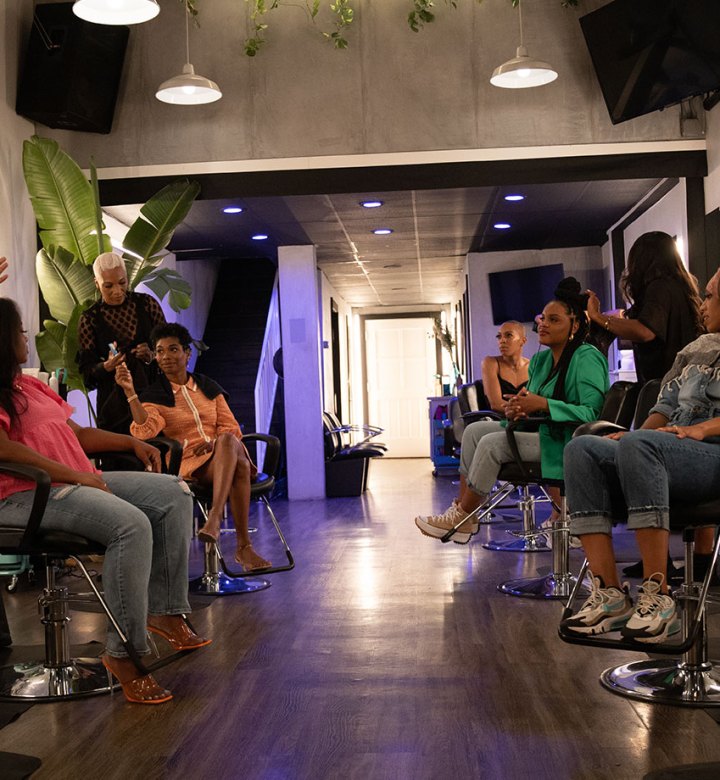 Watching their stories was like watching my own hair journey unfold, because my hair has also proven to be resilient, bouncing back after years of frying my strands and hiding it under weaves without proper care. By the time I got to college, I attempted a fresh start. I cared a bit less about what people thought, and so I steered clear of the hot combs and limited blow dryers, instead turning to Google for all the natural hair inspiration. I came to love and accept my hair’s texture and versatility, and it was so freeing to know that I didn’t have to go by society’s standards.

Dr. Tiffany Gill, author of Beauty Shop Politics, hit the nail on the head when she said, “What's really interesting about Black hair is the way that it is both stigmatized and celebrated. But the beautiful thing about being a Black woman is that we have always broken out of those narrow constraints. Black women have never ever allowed other people's expectations of us to define us. We have Black women who still assert themselves and say, I want to wear my hair in a particular way, even if it is not accepted in the mainstream.” 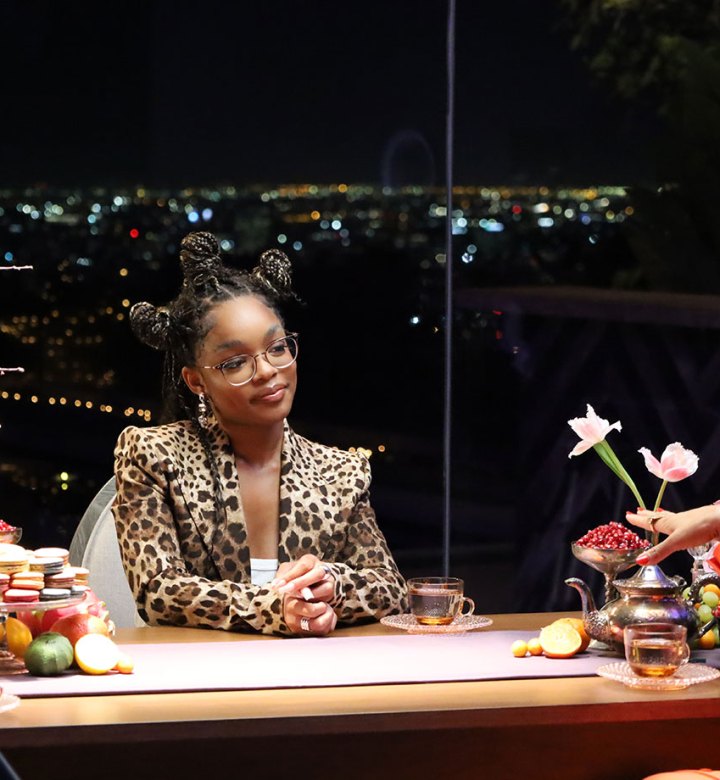 Allure’s Editor-in-Chief, Jessica Cruel, also spoke to the strength and resilience of natural hair with a powerful quote on why it’s fittngly called our “crown.” She explained, “There's a resilience to our hair that is also indicative of our culture and our personalities and our history. And that is why I think it's our crown. Crowns are very hard to break.”

I’d like to think that I’m not the only one who got chills hearing that statement. It reminded me that my hair truly has a life and a story of its own. And that even in times when I slack off with maintenance (don’t get me started on the detangling process), it somehow remains full and healthy and strong. I’m only halfway through Hulu’s series, but I’ve already developed an even deeper appreciation for the coily hair that I have.

And something tells me it’ll have a similar impact on other Black women who grew up with natural hair.

Although this moving docuseries is centered on women with natural hair, it addresses key, relevant issues in the beauty industry and helps viewers gain a deeper understanding of the complexity of Black hair. These stories will especially resonate with Black women who shared the common struggle of manipulating their hair to fit in, and Ross does a phenomenal job by asking the right questions and creating a safe space for these women to be vulnerable.