Why Can't I Stop Thinking About Natalie Portman's Kitchen?

The celebrity cooking video: At first I didn't engage—why do I need to watch Kylie Jenner make shrimp tacos in her billionaire's kitchen? And sure, I love Chrissy Teigen, but her cooking videos became inextricably tied to something she was selling...which took the fun out of it. But slowly, I began to dip my toe into a different type of celebrity cooking video, the kind where it's just a celebrity we know and love cooking in their kitchen...for what seems like absolutely no reason.

It started first with Jessica Seinfeld's strangely edited vids, which can only be described as whimsical ASMR image- and sound-scapes, and then beautifully snowballed into Jennifer Garner's wonderfully bizarre cooking vids that exist almost just to prove how early she wakes up. I mean, sure, they're all probably selling a book or forging a lifestyle empire down the line, but I like how these at least appear to have zero stakes and no production value beyond an eager assistant.

Which brings me to Natalie Portman. Natalie is a MOVIE STAR with a capital M. We know so much about her—she's talented, vegan, gorgeous, whip smart, passionate—and yet, she's not quite knowable. A philosophy professor in college once described Natalie Portman as the Kantian ideal of beauty. I still don't really know what that means, but like, how do you begin to approach that? For these reasons, I was kinda shocked to see that Natalie began releasing her own celebrity cooking vids. Considering the star only joined Instagram in January 2018 and mostly to advocate for the worthy causes in which she believes, it was surprising to see Natalie, a goddess who literally hovers above the earth we walk on, getting all down home in her kitchen making latkes. Peppered between photos calling out the entertainment industry with #TimesUp, family separation, plant-based eating and some of her own promotional materials, these videos seemed out of place. But I couldn't fully figure out why...and then I suddenly realized: the kitchen.

In the age of millennial pinks, plant parents and open-concept everything, this kitchen is quite startling. Dark wood covers the space from floor to ceiling—even the refrigerator is wood paneled. Does the effervescent, vibrant Natalie Portman really cook in a kitchen that could belong on the original Titanic?

But there's more going on beyond aesthetics, right? Here, my attempt to break it down. 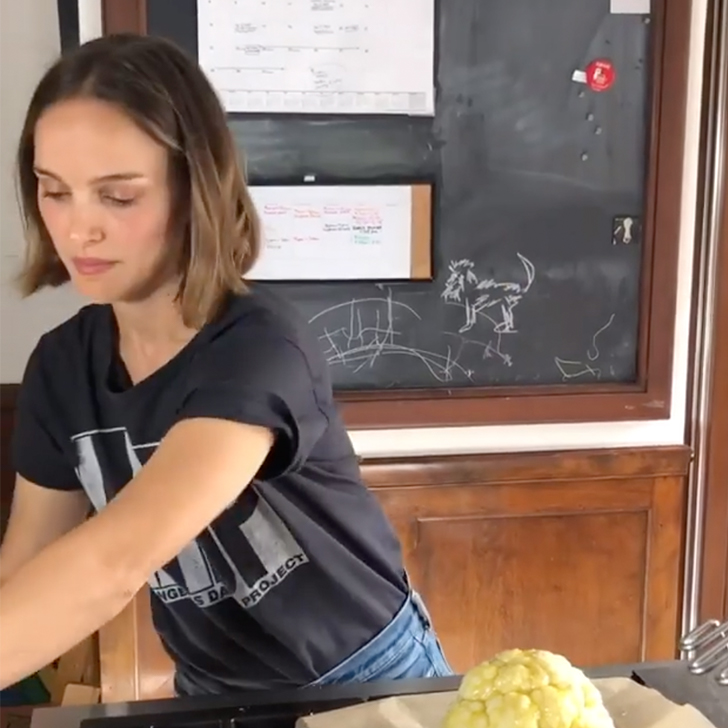 OK yeah, I'll bite: What's up with that chalkboard? It's way too high up for her young kids to draw on, and I'm also assuming she has a person to tell her all the important reminders she needs, so in that way, a chalkboard that big and high kinda feels like a massive flex to all those people out there with much smaller organization chalkboards and no assistants to tell them when to do anything. 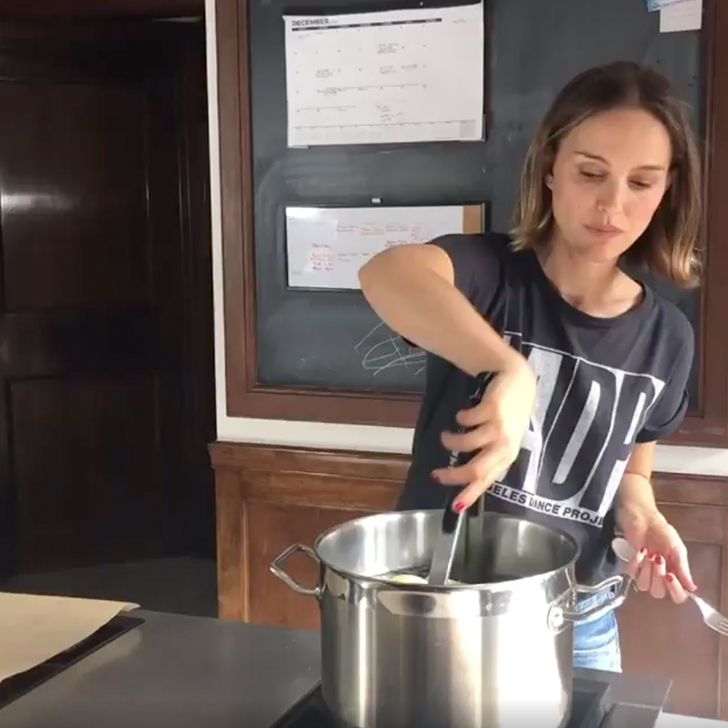 The Ominous Hallway To Nowhere

With a charismatic ball of light that is Natalie Portman, it's easy to miss the alarming abyss on the viewer's left side of the frame. I would wonder what might be beyond that doorframe if it wasn't so glaringly obvious that spacetime is being swallowed into a blackhole that has apparently emerged in what could be Natalie's living room. 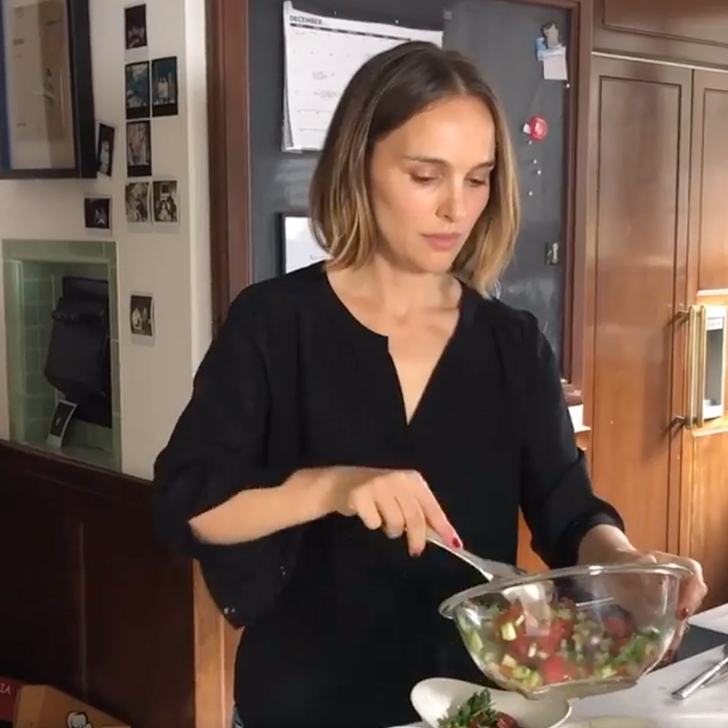 What is that device framed by pistachio tiles? Some guesses from around the office include: an ATM, an ice maker, a photo booth? And does this mean there are more pistachio tiles in use on the other side of the camera? Even if we did know what this thing is, it raises more questions than answers. 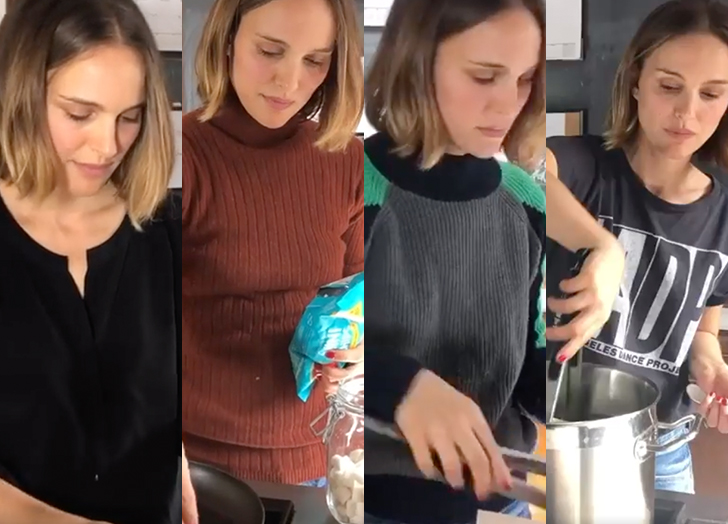 Natalie posted her first plant-based recipe in September 15, 2019. It was just a photo with the recipe in the caption. The chalkboard had a doodle of ducks on it. In November 26, 2019, she posted a GIF making plant-based Thanksgiving pastries. The chalkboard was covered in flyers and invitations.

On December 21, 2019, however, Natalie steps it up. She posts her first edited cooking video where she's making latkes for Hanukkah. She's wearing a colorblocked sweater with green sleeves. The chalkboard has a drawing of a dog, a bunch of straggly doodles, a December calendar, a red magnet and more.

The cooking videos she posts on January 5, 2020 (brown turtleneck/s’mores pancakes), January 29 (black billowy top/traditional Israeli breakfast), February 26 (LADP T-shirt/roasted cauliflower) all have the EXACT SAME chalkboard—a drawing of a dog, a bunch of straggly doodles, a December calendar, a red magnet. I mean, a December calendar deep into February? I don't know Natalie, but the Natalie I've imagined up in my head would never!

This could only mean that Natalie shot these in one fell swoop. These videos aren't a "hey, I'm making this for dinner, let's record," thing. They're part of her strategy to communicate plant-based eating, and while there is absolutely nothing wrong with that, I'm relieved that through obsessive viewing, I've finally put my finger on what makes these videos so out of place to me. Unlike Jennifer Garner or Jessica Seinfeld, Natalie is not trying to endear us with the whole "I'm a millionaire celebrity, but look how kooky and normal I am!" She's smart, she's good on camera (obvi) and she knows people watch this kind of thing, so if it can help move the needle on getting people to stop eating animals, why not?

While it doesn't explain the kitchen, it does shed a little light on the mystery of it all—maybe it's not Natalie's kitchen at all. Maybe it's a set. Who knows? I'm not gonna solve this one because Natalie doesn't want us to. What she does want to do? Start eating plant-based. Time to roast up some cauliflower for dinner.