You may remember him as the hilarious Coach Hines from Mad TV, or perhaps you’ve caught a glimpse of his sketches with his partner in crime, Jordan Peele, on their Comedy Central show Key & Peele. Of course, we’re talking about none other than Keegan-Michael Key, better known as former president Barack Obama's trusted anger translator.

Key has been taking Hollywood by storm with his many comedic roles, from Apple TV+’s Schmigadoon! to Netflix's The Prom. And by the looks of his Instagram profile, he’s also very happily married. But who is Key’s wife, Elisa Key? And how long have they been together? Keep scrolling for details.

24 Musical TV Shows to Add to Your Queue Right Now 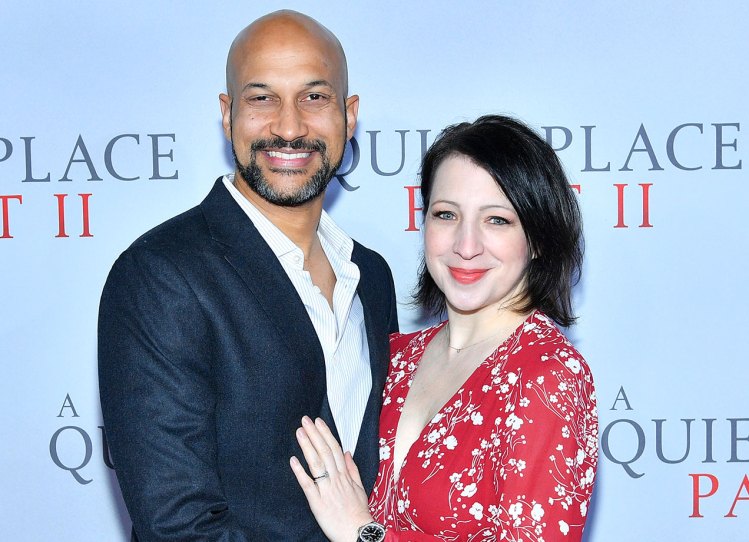 According to her IMDB page, Elisa Key (formerly Elisa Pugliese) is an actress, producer and director. The Bronx native is best known for her work on movies like School of Rock, Boy Meets Girl and Fair Game.

She shows me every day that each one of us has the ability to help make the world a better place. I’m the luckiest man ever. She said yes! pic.twitter.com/UYhtSQ4GQH

2. When did they start dating?

The Keys haven’t discussed how their romance began, but we do know that they made their relationship public in January 2017, when they attended the 28th Annual Producers Guild Awards. After this, they made multiple red-carpet appearances together, including the BAFTA Tea Party, the Tony Awards and the Emmys.

By November 2017, Key announced on social media that they were engaged. He wrote, “She shows me every day that each one of us has the ability to help make the world a better place. I’m the luckiest man ever. She said yes!”

3. When did Key and Pugliese get married?

In 2018, the couple tied the knot in a small, intimate ceremony in their New York apartment. The following day, they threw a huge party that, according to Key, felt like the best prom night ever. During his appearance on Live with Kelly and Ryan, Key said, “The band wore tuxes, I wore a corsage, there were football players and theater geeks there. We got on the floor and danced to ‘Blister in the Sun’ by the Violent Femmes—it was basically a prom.”

4. Has Keegan-Michael Key been married before?

As it turns out, this is Key’s second marriage. He was previously married to actor, director and dialect coach Cynthia Blaise. They tied the knot in 1998 and divorced in 2017.

5. Do Key and Pugliese have any kids?

It doesn’t appear so, and neither Key nor his wife have confirmed that they intend to have kids in the future. Still, something tells us they’d make amazing parents.

What Is Daniel Kaluuya's Relationship Status? Everything We Know