Now that Queer Eye just won another Primetime Creative Arts Emmy Award, we’re back to obsessing over the Fab Five.

And while we've done quite a bit of fangirling over (and research on) Bobby Berk, Karamo Brown, Tan France, Antoni Porowski and Jonathan Van Ness, we learned one interesting (and surprising) fact. Out of all five stars, only one of them has children—Karamo Brown. So, who exactly are Karamo Brown’s kids?

Jason "Rachel" Brown is a rising young star (following in the footsteps of his father) in Hollywood, who studied dramatic and comedic acting at the University of California, Los Angeles.

However, it wasn’t until he was 10 years old that he learned who his father was. Karamo opened up to Parents.com about discovering he had a son after receiving a subpoena for child support on his doorstep.

“My last girlfriend in high school—when I was 15—became pregnant with my child but did not tell me," Brown said. "She moved away, and I never had contact with her again; remember this is before social media. I was confused, sad, angry, and weirdly excited to be a dad, but felt lost nonetheless. We were both kids and don’t blame her for the decision she made because the choice was not hers, it was the adults around us."

According to Slate, Jason (who has a large social media following and loves making TikToks) hopes to build a career in the entertainment industry as a television host.

“I’m trying to pursue my dreams of being a host and an executive producer right now and my dad is literally the most supportive person I could probably have in my corner when it comes to helping with that,” he told Slate.

Oh, and did we mention Jason and Karamo co-wrote two children’s books, entitled I Am Perfectly Designed and I Am Okay to Feel? Pretty cool.

Since then, Jason has also conducted celebrity interviews, filmed a special video with his father for HBO's Nuclear Family series and more.

After spending time with his son Jason, Karamo moved to Texas to become a full-time dad. He eventually also began taking care of his son’s younger half-brother, Christian ("Chris").

“I took legal guardianship of Chris [in 2010],” Karamo told Parents.com. “Chris was nine at the time, and it has been an amazing journey. Again, I give my son’s mother so much praise for allowing me to step in and support her in raising our kids.”

Chris has remained out of the spotlight and even deleted his Instagram account in recent years. However, he has been spotted at various events with his step-dad and half-brother, like when the trio attended the Queer Eye premiere back in 2018. 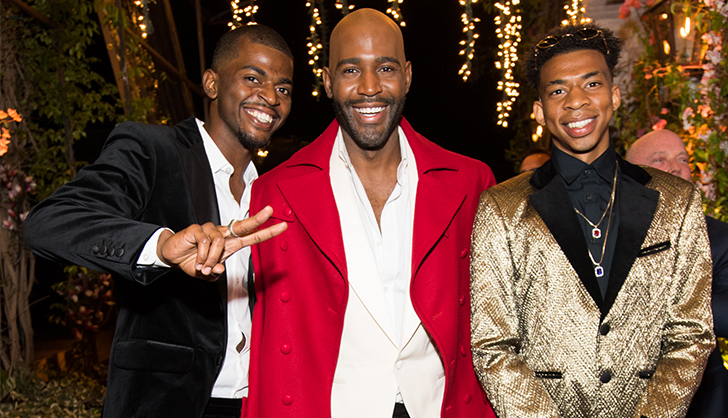 From what we last heard, both sons still live with their father in Los Angeles, however, when Queer Eye began, Karamo was often on the road and couldn't spend as much time at home as he used to.

“He’s gone pretty much a lot of the time nowadays,” Jason told Slate in 2018. “It’s awesome you know because it’s more success and more opportunities that he’s getting into, but we would literally love to have him around like we used to have.”

Pleased to meet you, Jason and Chris.