‘Gaslit’ Isn’t Perfect, But It Just Might Earn Julia Roberts an Emmy

During this year’s Oscars ceremony, co-host Amy Schumer delivered some spot-on commentary about Hollywood’s portrayal of women in films. But perhaps one of her best lines came when she brought up the critically-acclaimed film, King Richard. She quipped, ”After years of Hollywood ignoring women's stories, this year, we finally got a movie about the incredible Williams sisters'...dad.”

It was all in good fun, of course. But oddly enough, this was the quote that came to mind as I watched the first episode of Gaslit, a new Starz political thriller starring Julia Roberts, Sean Penn and Dan Stevens. The series just premiered ﻿today on Starz, and it details the events of the Watergate scandal through the eyes of Martha Mitchell (Roberts), wife of President Richard Nixon’s Attorney General, John N. Mitchell (Penn). But fans who are expecting a deep dive into the outspoken socialite will be disappointed, because while Roberts’s character is easily the most compelling, her story gets sidelined by a group of men who aren’t nearly interesting.

To be fair, the performances are solid all around in this dramatized version of events. Shea Whigham is quite remarkable as the intimidating G. Gordon Liddy, whose manic gaze is unsettling enough to throw anyone off guard. Penn embodies the irritated and controlling husband﻿, Mitchell, whose loyalty to Nixon continues to threaten his marriage. Then there’s the hopelessly gullible John Dean (Stevens)—another Nixon superfan who’s desperate for acceptance and validation. But solid acting chops aside, it’s impossible to miss the amount of attention and screen time afforded to these male characters, from Liddy's curse-filled tantrums to Dean’s romantic escapades. A lot of these scenes have absolutely nothing to do with Martha, and one can’t help but see this as odd, given the show’s title and official tagline: “Watergate was wrong, Martha was right.”

In the moments that we do see her, though, she is glamorous and defiant—not afraid to speak her mind when it comes to controversial issues. And not surprisingly, Roberts delivers some of the most powerful scenes. For instance, about 15 minutes into episode one, Martha chats with a journalist about the Vietnam War and her raw honesty moves the reporter to tears. While posing for photos, she says, “You want to know why I've made these comments against the war? It's because my own boy, Jay, is over there in that Godforsaken jungle fighting for his life as we speak, surrounded by men who are trying to kill him. Do you know what that's like?” 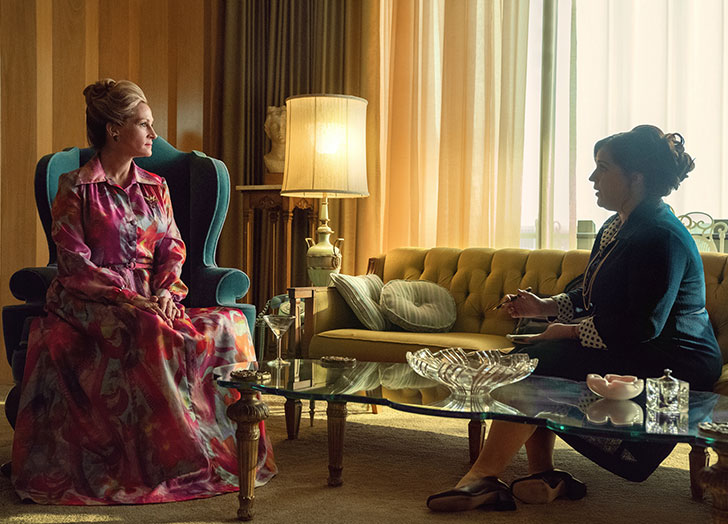 When the reporter admits that her brother was also drafted, Martha proceeds to sum up her personality in a few words. “We are empathetic creatures. Some people see that as a weakness. But I decided long ago that I will say how I feel. And if that does not conform to the president's message, then so be it.”

Naturally, Martha’s nonchalant attitude only makes things more difficult for her marriage. Add this to Mitchell's constant neglect and quick temper and you’ve got a seriously toxic relationship that goes from flirty exchanges to intense fights that turn physical. Still, it’s incredible to see Martha continue to stand her ground as she endures this abuse.

There are brief glimpses of her pain and frustration in certain scenes, like when she sits motionless on her balcony after getting into a huge fight with her husband. But these small examples don’t feel like enough because they barely scratch the surface of Martha’s story. Worse yet, the little that’s depicted is overshadowed by Nixon’s overzealous men as they start to plan one of the biggest political scandals in American history.

Yes, this series tackles relevant themes that will hit close to home, from political corruption to the media's relationship with the government. But the fact that so much more time is spent on the man who works for Martha’s husband really speaks to how easily women’s stories can fade into the background.

A new episode of the eight-part series is set to air each Sunday on STARZ.

Although Gaslit is meant to put the spotlight on Martha Mitchell—the Southern socialite who turned the presidency upside down in her efforts to expose the truth—this series barely gives her the attention she deserves. Even so, Roberts dominates every single scene in which she appears, making her a clear contender for an Emmy.