Yoga vs. Pilates: What’s the Difference & Which One Is Right for Me? 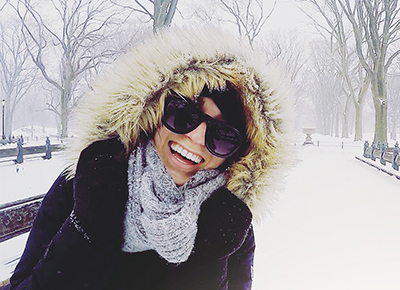 Interested in yoga or Pilates? If you’re looking for a new workout that’ll leave you sweaty and centered, these are two of our favorite low-impact options. But what’s the difference? And which one is right for me? Before braving a reformer or booking your next ClassPass session, here’s everything you need to know about yoga vs. Pilates. 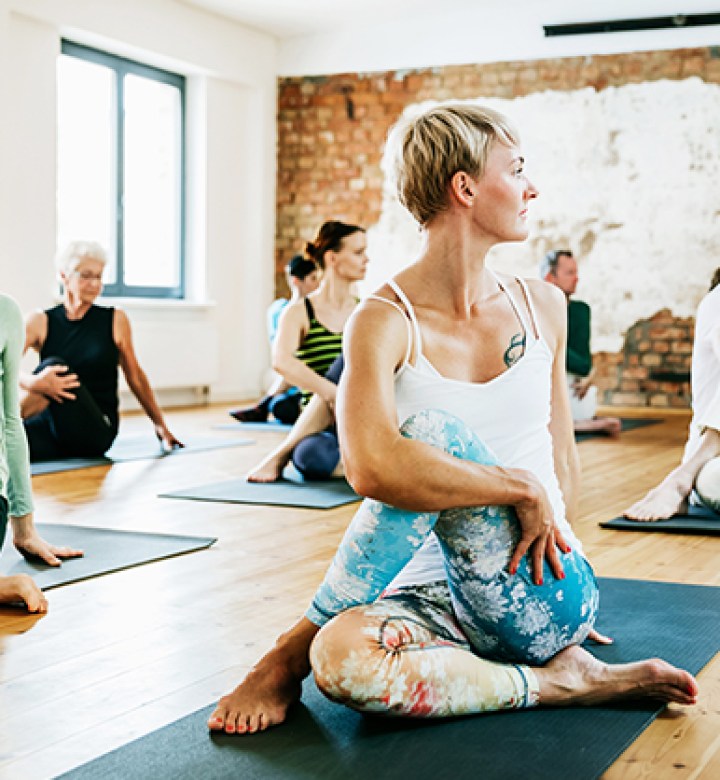 Yoga is a nearly 5,000-year-old discipline that originated in India and is rooted in ancient Indian philosophy, Dani Schenone, a Mindbody holistic wellness expert and certified yoga instructor tells us. Though it’s often referred to as a soothing form of exercise, yoga is so much more than a workout. “It’s a spiritual, mental and physical practice that incorporates a set of eight prescriptions (or limbs) that help us lead a more purposeful, fulfilling and conscious life,” Schenone explains. The eight limbs are all-encompassing and reflect the interactions between the mind, body and spirit. Asana is the one you’ve probably heard of most. Asana is the physical practice of yoga, the down dogs, the happy babies, the poses and postures you try your best to hold during class. Those who practice yoga view the body as a temple of the spirit and therefore value the care that’s put into maintaining it. The other seven limbs, however, are just as important and are one of the main principles that differentiate yoga from similar physical exercises, like Pilates.

Are There Different Types of Yoga?

If you take a look at your local yoga studio’s class schedule, you’ll see a number of different options. These aren’t just fun names the instructors thought up. There are dozens of different types of yoga out there, including Vinyasa, Kundalini and Bikram, to name a few. According to Schenone, all iterations of yoga stem from two parent traditions: Vedic and Shramana. “Imagine strands of strings hanging from those two traditions,” she says. “Those strings include much of what we know today as ‘modern yoga’. Others include Ashtanga, Hatha and Baptiste. ” Out of these more traditional forms came a number of other unique iterations as well, including hot yoga, aerial yoga, hip-hop yoga and (yup, we’re serious) goat yoga. “Yoga isn’t a one-size-fits-all kind of exercise,” Shenone explains. Finding a practice that works for you is completely individualistic and based on your goals, needs, lifestyle and personality.

What Are the Benefits of Yoga?

It’s no secret that practicing yoga has a number of short- and long-term health benefits, including its ability to increase quality of life, as discovered in this 2011 study by the International Journal of Yoga. According to Schenone, other health benefits include:

Those who regularly practice yoga can also expect to experience a positive change in body awareness. “Practicing yoga allows us to develop a better relationship with our bodies and our minds, increasing body acceptance and mindful consciousness,” Schenone explains. “Yoga helps us become more flexible, eases the general aches and pains and allows us to move more freely in our day-to-day lives.” Mobility gains aside, some could argue that the mental benefits of yoga are even more important than the physical. “Mentally, yoga helps us become more presents, more mindful and more accepting of ourselves and those around us. Committing to a daily practice helps us gain more confidence, grow our determination and calm our nervous systems.” Raise your hand if you think yoga should be a life requirement? 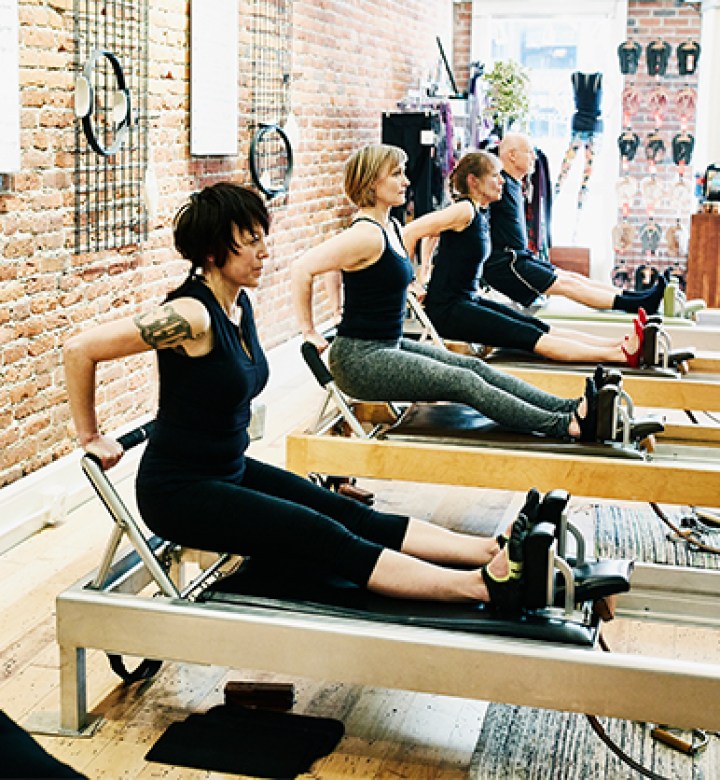 Similar to yoga, Pilates is a form of low-impact exercise that aims to develop one’s balance, strength and endurance, Amanda Freeman tells us, founder and CEO of SLT, an NYC-based Pilates fitness studio. Created nearly 100 years ago by Joseph Hubertus Pilates, the primary goal of Pilates is to support muscle balance, core strength and postural alignment through small, slow, precise movements. And even though you won’t be jumping around or dropping it low a la Zumba, you can still expect to be drenched in sweat within the first ten minutes of class. You can practice Pilates on a mat or on a special machine called a reformer, which is a flat, sliding platform composed of springs and pulleys that provide varying levels of resistance. It might look like a torture device on stilts (and it may feel like one mid pike) but the reformer is a uniquely designed machine that can train multiple parts of the body at once while simultaneously promoting flexibility and balance.

Are There Different Types of Pilates?

“Pilates has been reinterpreted in countless ways using a variety of different pieces of equipment,” Freeman tells us, including the reformer, the chair, the tower and the mat. “There’s everything from classical Pilates, power Pilates, mat Pilates and best of all, high-intensity Pilates which has grown in popularity,” including her own iteration, SLT, that merges Pilates with cardio on a machine called a Megaformer. Classical Pilates is the purest in form, following the original system and incorporating both mat and reformer work. It was originally created to help rehabilitate soldiers during wartime but was soon adapted to help dancers get long and lean. Contemporary Pilates is the more modern version, weaving in new understandings of biomechanics with the traditional Pilates exercises to create a system that’s arguably safer and more functional. There are a ton of other hybrid-Pilates options out there as well and, similar to yoga, finding what’s best for you is entirely dependent upon your goals and personal preferences.

What Are the Benefits of Pilates?

There’s a reason celebs like Kate Hudson, Cameron Diaz and Naomi freaking Campbell practice Pilates on the reg. “Pilates is known for its amazing results,” Freeman says, “that long, lean and toned muscle definition. When done right, you’ll feel it working immediately.” How, you ask? “Pilates works the slow-twitch muscle fibers,” also known as the endurance muscles, which are involved in postural control and sustained movement rather than explosive moves, like sprinting. Additional health benefits, according to the Better Health Channel, include:

So, What’s the Difference Between Yoga and Pilates?

Yoga and Pilates are often grouped together as similar forms of exercise. Though they both focus on mind-body awareness, are rooted in breathwork, are considered low impact and can help improve balance and strength, the similarities stop there. “Yoga prioritizes breath before movement,” Schenone explains, “whereas Pilates prioritizes movement, then breath. Furthermore, yoga focuses on increasing flexibility and strength in the limbs, spine and joints, while Pilates focuses first on core strength, then on balancing the body’s muscle groups.” Likewise, you’ll never find a reformer in a yoga studio. “Pilates is traditionally performed on unique equipment while yoga is done on a mat,” Freeman says. Schenone adds that, in addition, most Pilates moves are made lying down, while a bulk of the poses in yoga are conducted standing up.

Finally, their founding principles and basic roots are also where these two workouts differ. “The key difference between yoga and Pilates is the spiritual and mental component,” Schenone says. Yoga prioritizes mindfulness and the connection to one’s spiritual self. Pilates is founded on the practice of rehabilitation, strength and endurance.

If you’ve never done either (or are new to working out in general) Pilates and yoga are both great options for people looking to add a ritual of mobility and movement to their daily lives. If you’re already pretty active, they’re a great way to gain strength, maintain flexibility and alleviate stress.