A few weeks ago I sat down to watch the final season of Grace & Frankie and found myself yet again, like in every other season, completely entranced by Jane Fonda. It’s not just that she’s a wonderful actor, it’s that she moves with such grace and is still so good at physical comedy at the age of 84. I keep coming back to one scene in particular, at the very beginning of season 7, episode 11, in which she sits in a hanging basket chair, slowly spinning round, with her back against one side and her legs propped up above her head on the other forming a perfect V. All while sipping a martini. I don’t think I could comfortably get myself into that position now, and I am 31 and in pretty decent shape. Add alcohol and I would immediately tip head-over-heels onto the floor. Which got me thinking: Besides genetics, what is Jane’s secret to staying so agile well into her 80s? And then it hit me. It’s no secret at all, it’s Jane Fonda’s Workout. 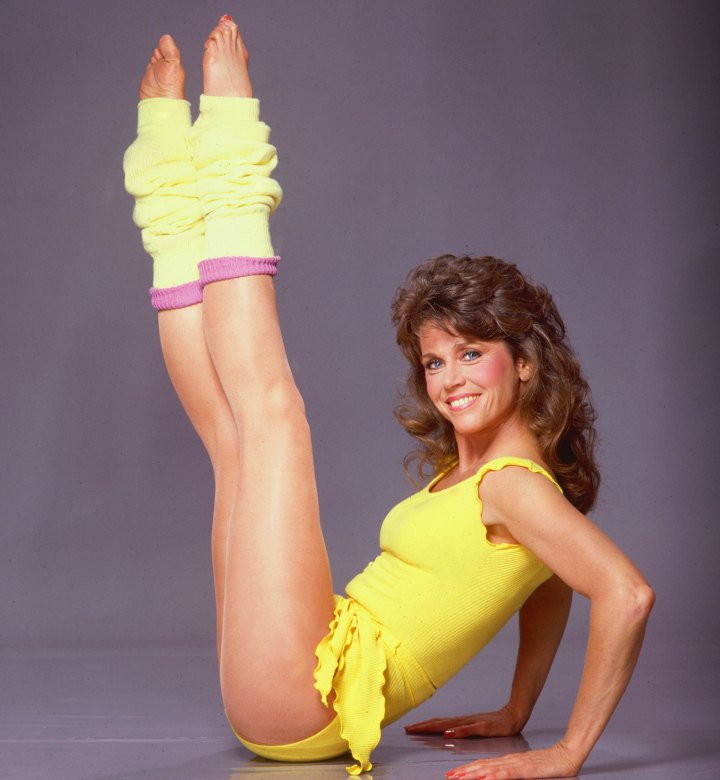 Fonda’s hit workout tape, Jane Fonda’s Workout, came out on VHS in April 1982 and was the first non-theatrical videotape to top sales charts and was the top-selling VHS tape for the next six years. I have no idea when I learned about the tape, it feels like it simply seeped into my consciousness by way of knowing women who bought it, and to be honest I didn’t even really know what the exercises looked like or what type of workout it was until pitching this story. But if Jane Fonda can be as fit as she is at 84, it seemed as good a place as any to start setting myself up for more agile golden years.

Fonda’s workout tapes are available for rental or purchase on Amazon Prime Video, however most can also be found on YouTube with handy time stamps indicating when certain exercises start or where to skip to if you’d rather do the 55-minute advanced workout instead of the 30-minute beginners workout. (Remember, this was originally on VHS where you’d just have to fast forward and rewind to get where you wanted.) So a few weeks ago I loaded up her OG video, pushed my couch aside and got ready to see what all the fuss was about.

For the next 30 minutes, Jane Fonda and her leotard-clad crew guided me through a warm-up, arm, waist, leg, ab, hip and butt exercises, and finally a cool-down stretch. Immediately I found myself smiling and laughing along, partly because of the wonderfully outdated workout clothing and hairdos, but also because Jane herself is fun to workout with. She’s cheery and encouraging without seeming disingenuous or overly smiley. And you can tell that she and the others in the video are actually working out and feeling the burn, just like I was in my apartment. In fact, many parts of the workout were much harder than I’d anticipated. The arm exercises aren’t exactly hardcore—I eventually added in some light weights to make them tougher—but those hip moves? Whoa nelly, they really wiped me out.

After doing both the original beginner workout and the advanced once each—aka, the bare minimum I promised in pitching this story—I knew I would for sure come back to Jane, and started to pin down what exactly made me want to come back. I liked that there is no equipment required, not even sneakers, although Jane and I both recommend using a yoga mat for the floor work. I liked Jane’s energy and the music, which is upbeat without being overbearing. And I appreciated that none of the moves were overly complicated, so it was super easy to pick it up even on my first watch.

But it was in talking with my aunt, who at 81 years old still does Jane Fonda’s workouts whenever possible, that I realized the thing I loved most about the tape: Jane doesn’t mention losing weight, toning up or indeed much of anything about bodies over the course of the entire workout. She talks about what you should be feeling and where, and gives advice on proper form, but otherwise doesn’t presuppose anything about the person doing her workout. She doesn’t talk about “getting a bikini body” or “shrinking your waist.” She just tells you what moves to do, counts your reps and lets you forget about why you’re doing this in the first place. Instead, you just have fun.

I’ve since starting doing Jane Fonda’s Workout multiple times a week, especially on busy days when I can’t get out before dark for a run or over to the gym. There are other workout programs I’d recommend if you’re the type who likes lifting weights or moving through exercises at your own pace, but 40 years later, Jane Fonda’s workout tapes still hold up and can absolutely help improve your fitness and well-being. At least I’ve noticed a real difference in my strength, especially with those killer hip moves. Only time will tell, but here's hoping I can follow in the steps of my 81-year-old aunt and 84-year-old Jane Fonda and still be able to rock a high kick in my leotard 50 years from now.

12 Fun Exercises for Some Much-Needed Cardio at Home