Just call Taylor Swift the leader of the Conversations with Friends fan club.

In case you didn’t know, Swift’s boyfriend, Joe Alwyn, currently stars in the new Hulu show. The Folklore singer reposted a Time review about the series on her personal Instagram Story. Alongside a screenshot of the piece, she wrote, “Can confirm it’s phenomenal.” 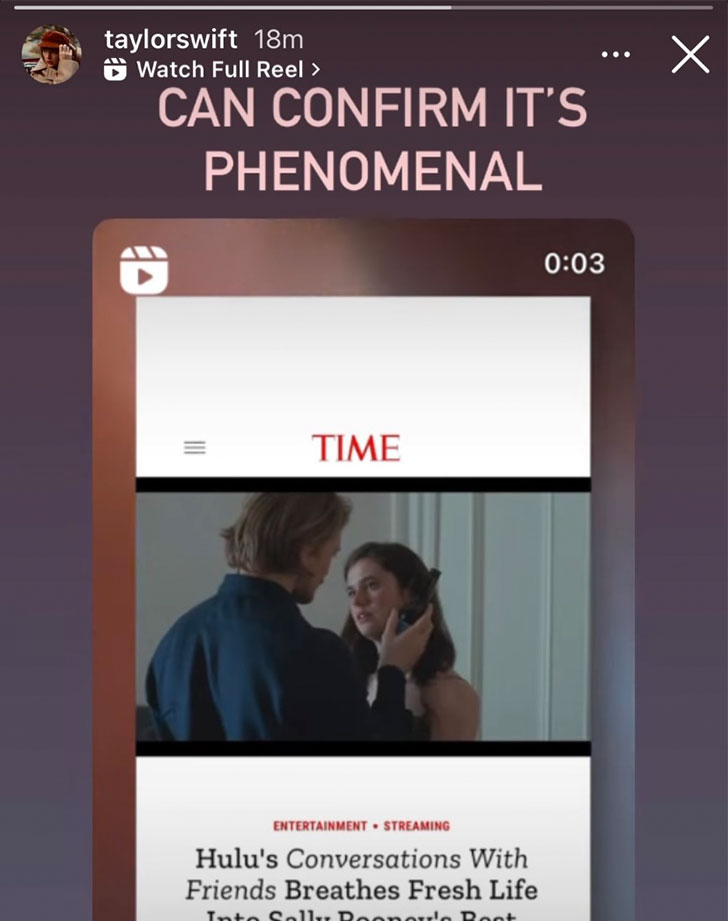 Alwyn and Swift have been dating since 2016. The couple has tried their best to keep their relationship private. Rumors of their engagement have been circulating the internet for quite some time, with neither star confirming nor denying them to the public.

Following the success of Normal People, Conversations with Friends centers around two exes named Frances (Alison Oliver) and Bobbi (Sasha Lane). Their relationship is a bit rocky when they meet married couple Nick (Joe Alwyn) and Melissa (Jemima Kirke). When Frances and Nick start falling for each other, things get even more complicated.

Both television adaptations are based on the book series, written by Sally Rooney. Conversations with Friends serves as the follow-up novel to Normal People, hence their connection.

If you’ve watched the series, then you know there are a few steamy scenes between Alwyn and his co-star Oliver. But, according to the Harriet actor, Swift doesn’t mind them at all.

In a recent interview with Extra, the 31-year-old actor said he didn’t have to warn her about the scenes, being that she’s a big fan of the book series. “[Taylor’s] read the book and she loves the book so she knows it,” he said. “She just, like, couldn’t be a bigger fan of the project.”

If you want to watch the show for yourself, all twelve episodes of Conversations with Friends are streaming now on Hulu.