It’s official: Steve Carell just made his highly anticipated return to TV in Netflix’s Space Force. All ten episodes hit the streaming service earlier today, and while I haven’t had the chance to binge-watch the entire season (at least not yet), I couldn’t resist watching the first episode.

There’s still more to unpack, but I can confidently say that Space Force is a must-watch for anyone who loves shows like Parks and Recreation, Arrested Development and Insecure. (You know, sitcoms that have a somewhat serious story line.)

However, if you’re expecting Space Force to be a galactic spin-off of The Office—with Carell playing a reimagined version of Michael Scott—you’re going to be extremely disappointed.

So, what is Space Force about? And should you add it to your streaming queue? Keep reading for all the deets. 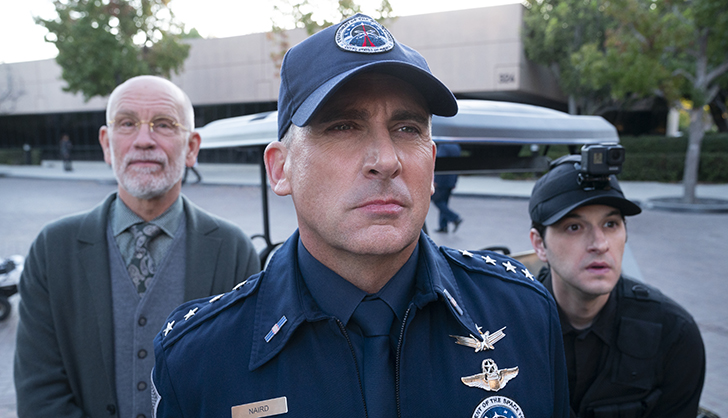 The first episode introduces viewers to Mark R. Naird (Carell), a decorated Air Force pilot who is tasked with leading the U.S. Armed Forces’ newest branch: Space Force. This includes uprooting his wife, Maggie (Lisa Kudrow), and his daughter, Erin (Diana Silvers), to Colorado, where he takes over the super-secretive base.

After a one-year time jump, Mark is seen visiting the Space Force headquarters, which is—supposedly—kept hidden from locals. (What base?) At one point, he’s driving in the car and approaches a mountain disguised as a secret door, which leads to a road and, well, you get the idea. Mark even detains a cashier at the gas station, who mentions the upcoming Space Force launch that no one’s supposed to know about. Whoops!

When Mark returns to the base, he immediately goes into preparation mode for the big launch later that day. The problem? Everyone—and I mean everyone—is advising against it, since it’s not quite ready for orbit.

Despite their recommendations, Mark doesn’t postpone the launch, which proves to be successful. Boots on the moon! That all changes later that night when Mark is watching it through a telescope and spots a large spacecraft disassembling the satellite mid-orbit.

Oh, Mark also visits his wife Maggie in jail, which is a complete shock to me. I have no idea why or how she ended up there, since the episode featured a time jump and didn’t explain her situation. But I wouldn’t be surprised if she somehow betrayed the Space Force during her first year on the base, resulting in a real-life Orange Is the New Black experience. 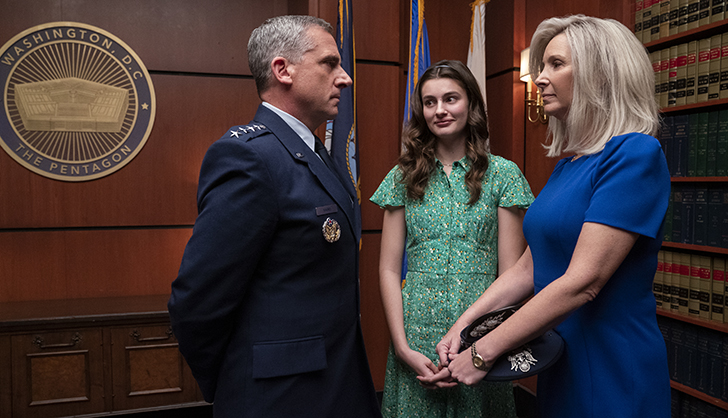 The short answer is yes, but I should warn that it’s nothing like The Office. You see, the retired NBC series can be picked up at any point, and it’s pretty easy to understand what’s happening in the story. The same can’t be said for Space Force (based on the first episode, at least).

It has a much deeper plot that left me wanting more, since the character development has only just begun. Not only am I curious about Maggie’s arrest, but I’m also low-key rooting for Mark to successfully run the base, considering the popular belief is that he’s unqualified.

Admittedly, the space references aren’t necessarily my thing, but I enjoyed the comedy aspect that accompanied the entertaining story line. For example, one scene shows Mark receiving a call from his dad, Fred (Fred Willard), who escaped from his caretaker. While I’m a total sucker for Willard (#RIP), it’s a nice dose of comedic relief during an otherwise serious moment.

As for Carell, I did see a few hints of Michael Scott, even though the actual show didn’t remind me of The Office. In one scene, Mark has a lengthy dance party in his office in an attempt to clear his mind. This consists of staring out the window while singing and dancing to “Kokomo” by The Beach Boys.

Also, Mark accidentally presses the “launch” button with his foot during a conversation with Dr. Adrian Mallory (John Malkovich). This comes after Mark refused to buy plastic covers, per Dr. Mallory’s recommendation.

Oh, and did I mention that Noah Emmerich (The Americans, The Spy) makes a cameo as General Kick Grabaston (Mark’s rival)?