Today marks a very special occasion for Prince Harry and Meghan Markle's son, Archie Harrison Mountbatten-Windsor. The toddler is celebrating his third birthday today, and Queen Elizabeth shared a special tribute to Archie ﻿on her Instagram Story, including a throwback pic and a cake emoji. The message reads, "Wishing Archie Mountbatten-Windsor a very happy 3rd birthday!"

The snap, which was taken by Chris Allerton, features the queen and Prince Philip gushing over baby Archie as Markle cradles him in her arms. Right next to Markle is her mom, smiling proudly at her grandson while Prince Harry stands next to Prince Philip, practically beaming at his newborn. 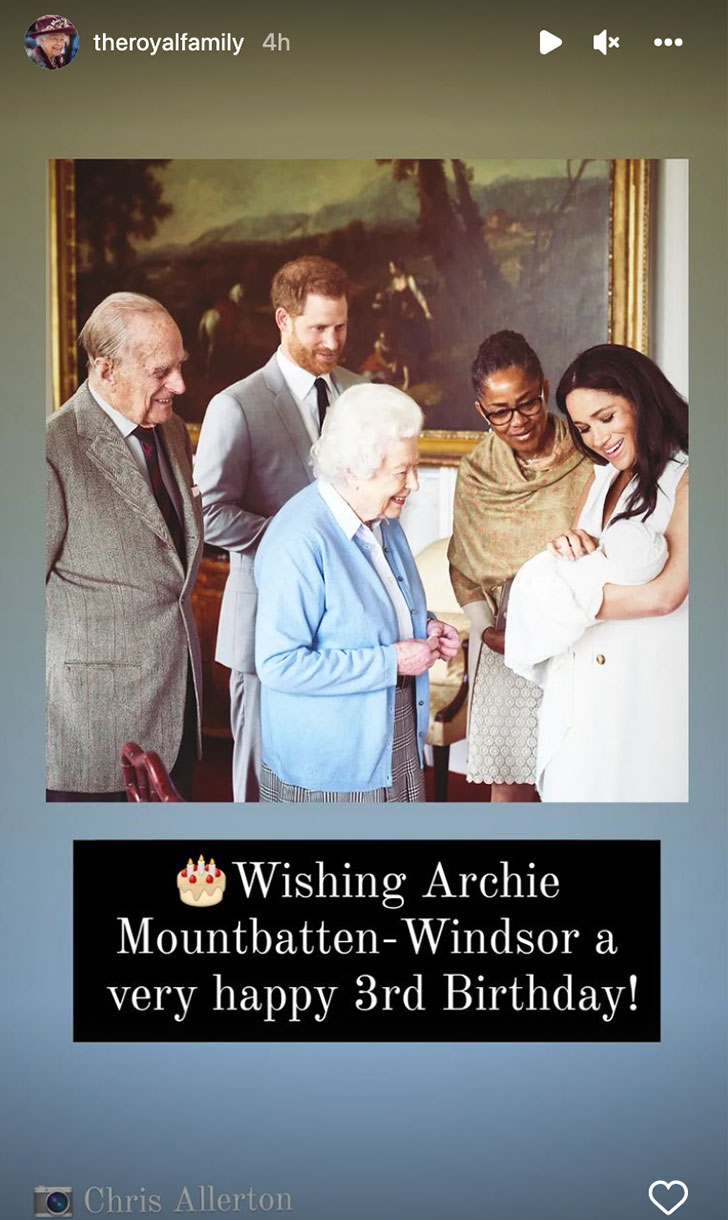 The image appears to be sending a message of love and support to the Sussexes, since the queen is in a jovial mood and her ﻿late husband is present (making the pic even more meaningful). After the queen shared the same image to her Twitter account, her followers filled the comments with their reactions and well wishes. One fan said, "Look at the Queen's face. she's so happy to see this little one." Another wrote, "Happy Birthday Archie! Wishing you buckets of love and uncountable gleeful moments!"

Queen Elizabeth's birthday tribute comes just a few weeks after the Duke and Duchess of Sussex returned to the U.K. to visit Her Majesty after two years. During their reunion, the queen and her grandson discussed the Invictus Games, which had been on a two-year hiatus. He told BBC, "She had plenty of messages for Team UK, which I have already passed on to most of them. So, it was great to see her." He also noted that she would “love to be ﻿[at the Invictus Games] if she could.”

We imagine if the queen had her way, she would also be celebrating this milestone birthday with her great-grandson in person. Happy third birthday to Archie!