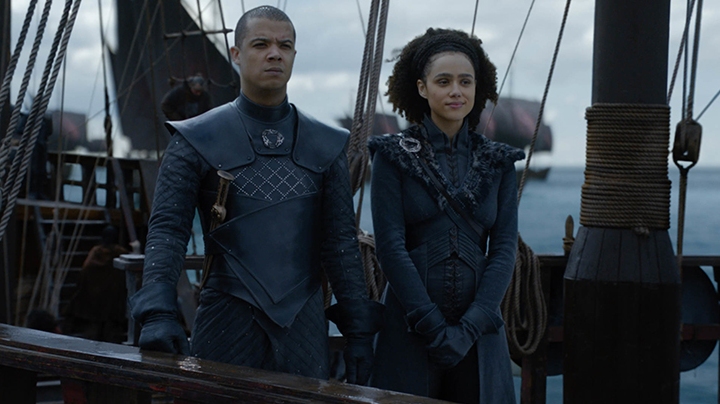 As if watching Sir Jaime walk away from Brienne of Tarth wasn’t heartbreaking enough, episode four of the final season of ﻿Game of Thrones delivered yet another blow to viewers when Missandei came to an untimely end.

The dragon queen’s confidante has been a fan favorite since she first appeared in season three of the hit HBO show. And we audibly cheered when at the start of season eight, Missandei and Grey Worm made plans to leave Westeros after the war was won and return to the beaches of Naath. Alas, this happily-ever-after was never to be (classic GoT).

Actress Nathalie Emmanuel was heartbroken about Missandei’s fate, but not entirely surprised. “There’s like a cruel inevitability in this show where anybody who finds that happiness is going to have to watch that taken away from them,” she told Entertainment Weekly. “So I thought either Grey Worm or Missandei, that one would be taken from another.”

Reminder: When Daenerys and her dragons are ambushed by Euron and the scorpion weapon at Dragonstone, Missandei becomes Cersei’s prisoner. Then when Dany and crew show up at the gates of King’s Landing to demand Cersei’s surrender, it doesn’t quite go as planned. Cersei demands that they surrender instead, and if Dany refuses, then she’ll kill Missandei. And despite Tyrion’s best attempts at reasoning with his sister (yeah, right), Cersei orders the Mountain to execute Missandei after uttering her famous last words: Dracarys. Sob.

Although Emmanuel was sad about her character’s ending, she told the publication that she was incredibly grateful to have been part of the show in the first place. There is one thing, however, that she wished Missandei had had the chance to do.

“I would have loved to see Missandei fighting,” she said. “I think that’s just me projecting onto her that I want to see her being a badass with a sword or bow and arrow. I feel like a bow and arrow would be her thing, as it’s super specific and requires a lot of skill. I guess I was relieved to not be doing 11 weeks of night shoots, but there’s a part of me that’s a little sad Missandei didn’t throw down in the battle.”