‘Game of Thrones’ Season 8, Episode 4 Recap: A Debt that Can't Be Repaid

Quick recap of last week: We previously saw our beloved characters during episode three, called "The Long Night." In it, we finally got the big Battle of Winterfell, which made us question everything we thought we knew about life, death and whether our favorites would make it to the end.

But survive they did, and with the loss of only (well, not only, but still...) Jorah, Theon, Beric Dondarrion, Lyanna Mormont, Melisandre and Night's Watch Commander Edd, we felt a sense of relief for the great yet terrifying game.

Thanks to No One (aka Arya), the threat of the Night King and the Army of the Dead were extinguished for good (?) on Game of Thrones, but the real war for Westeros was only just beginning... 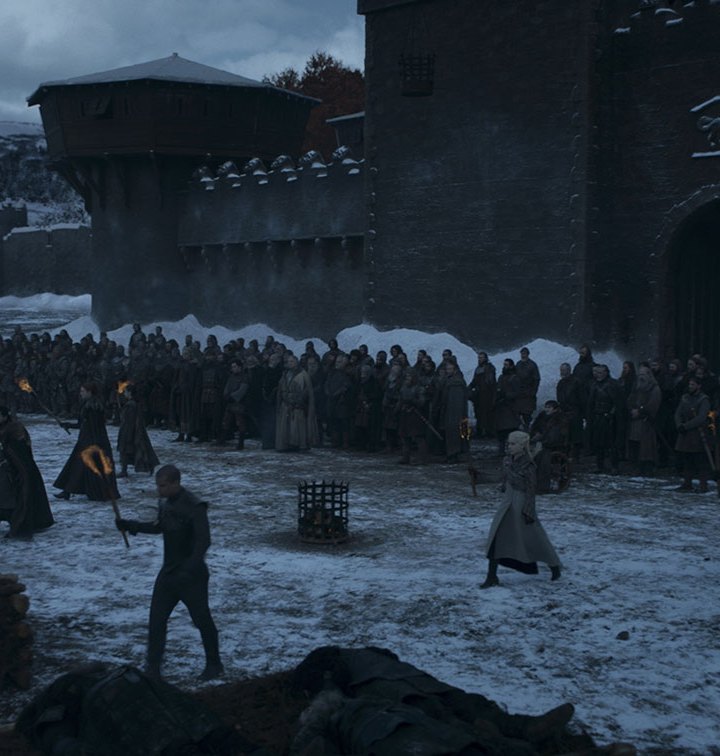 We begin episode four with the burning of the dead after battle. We see Jorah's and Theon's dead bodies atop pyres as Sansa gives a Stark pin to her Greyjoy savior. There's a very injured-looking Ghost in the crowd, too (but we already knew from the trailer that he made it out alive). Jon Snow gives a speech to honor the dead and sounds like a true king (we got major Ned Stark vibes). He says, "Everyone here owes them a debt that cannot be repaid," and was that a Lannister reference? We're already shook.

We next see our beloved survivors at a very somber dinner at Winterfell, until Gendry is made Lord of Storm's End and an official Baratheon by Daenerys. Thatta boy, Gendry.

Things start to look up from there: Tormund is having a helluva time chugging wine out his horn-cup thingy and toasting to Jon Snow, but we see Daenerys's fallen face in contrast. We then pan around to the room through Dany's POV, and we realize she feels totally isolated from everyone. Tyrion has Jaime, Jon has his Wildlings, Stark cousins and northerners, but Dany...Dany is alone. This doesn't bode well for our dragon queen.

Gendry finds Arya (practicing shooting a target with a bow and arrow, naturally) to tell her the good news, and whether it's his giddiness or the wine, he works up the courage to propose to her (yep, that was quick...but we gotta respect that he knows what he wants). "Be the Lady of Storm's End" he asks Arya. They make out, but Arya is quick to correct him. "I'm not a lady, I never haven been. That's not me," she replies, and we're sad for Gendry, but not at all surprised. Arya's still on a mission, and she has bigger things to think about than getting married.

After more than a couple jugs of wine, Jaime comes knocking on Brienne's door, and the two finally knock boots. Sorry, Tormund, but Braime 4ever!

Dany finds Jon and tells him she loves him in a way that she could never love Jorah, and they start to make out (sheesh, there's something in that wine at Winterfell tonight). Except Jon remembers she's his aunt, and they begin to bicker about his truer claim to the throne. Dany asks him to never tell anyone, and to make Bran and Sam swear secrecy so that everyone still believes she's the true heir. Jon wants to tell Arya and Sansa about his parents, but Dany begs him not to. "You are my queen, nothing will change that," he pleads with her. Yeah, except for the fact that you CAN'T keep a secret, Jon.

The next day in the strategy room, we learn half of the North's forces are gone, and Dany is out for Cersei's blood. Jon and Tyrion want to surround King's Landing and make her surrender, but Arya and Sansa say the Northern forces need to rest up. Jon finally takes Dany's side and pledges their forces to Dany's cause whenever she wants to give the command. The girlfriend wins...this time.

The Starks have a meeting because Arya and Sansa aren't happy their "half-brother" wants to take Dany's side. They say they don't trust her, so in order to change that, Jon has Bran tell them his true lineage. Dragon's out of the bag, and it's not long 'til a number of folks in Westeros know Jon's real name. 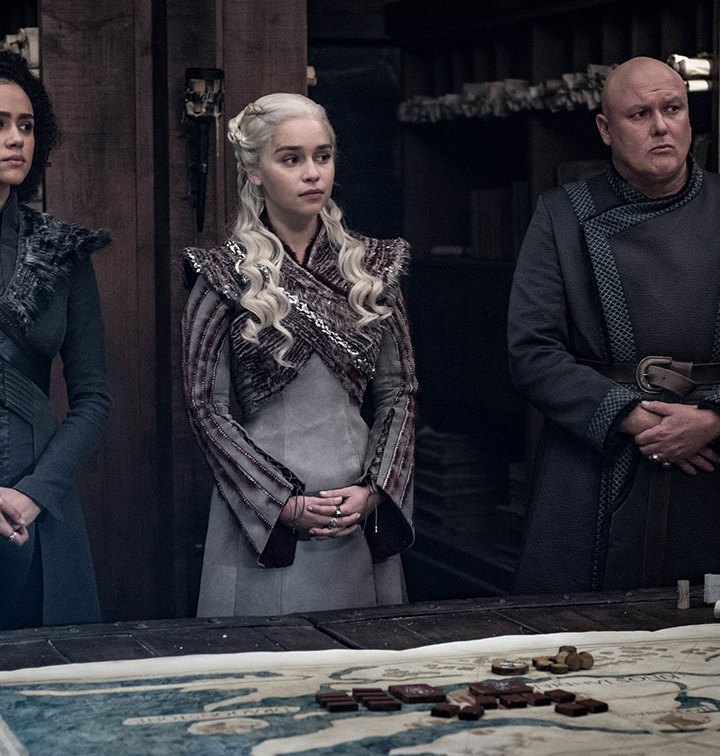 We learn that Jaime and Brienne are planning to stay in Winterfell together since she's sworn to protect the Stark girls. As Tyrion is teasing his brother with "tall-person jokes," Bronn shows up out of nowhere with the crossbow and tells them Cersei's promised him Riverrun in exchange for killing them both. The scene feels frantic and rushed, but it's obvious Bronn's not actually going to kill either of them when Tyrion promises him Highgarden in return for their lives. Bronn leaves as fast as he arrived, and we're left scratching our heads.

The Hound and Arya run into each other outside Winterfell, and the Hound says he has unfinished business to attend to in King's Landing (Does this mean Cleganebowl is actually happening?). Arya says she also has something to attend to, and she doesn't plan on coming back to Winterfell. (Nooooooooo! Please let that not be more foreshadowing.) 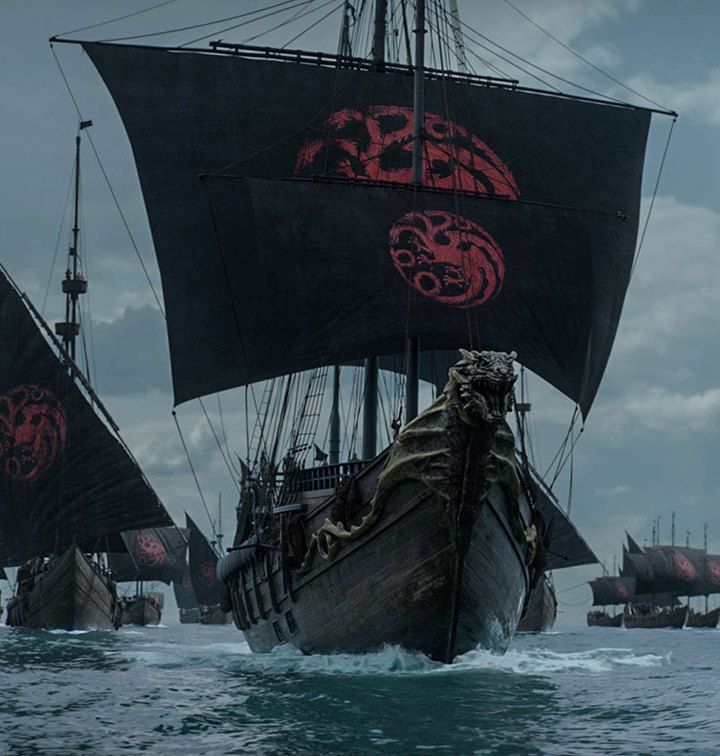 Before they head south, Tyrion finds Sansa as she's watching Dany's dragons fly overhead. Sansa's in denial about the relationship between Jon and Dany, but Tyrion wants to make sure Sansa's an ally in the north. The Lady of Winterfell almost bites back the words of telling Tyrion who Jon really is, but then she can't help but spill the beans. Welp, we guess there really is merit to the saying, "Three can keep a secret, if two of them are dead."

Jon says a few important goodbyes: to Tormund (who says he's sick of the "south," aka the North), to Ghost (whom Jon leaves with Tormund to take to the north, where he believes he'll be a happier yet still very good boy) and Sam and Gilly (who reveal that she's pregnant with a Little Jon...or Jane?). Those two do not like coming up with their own original names. 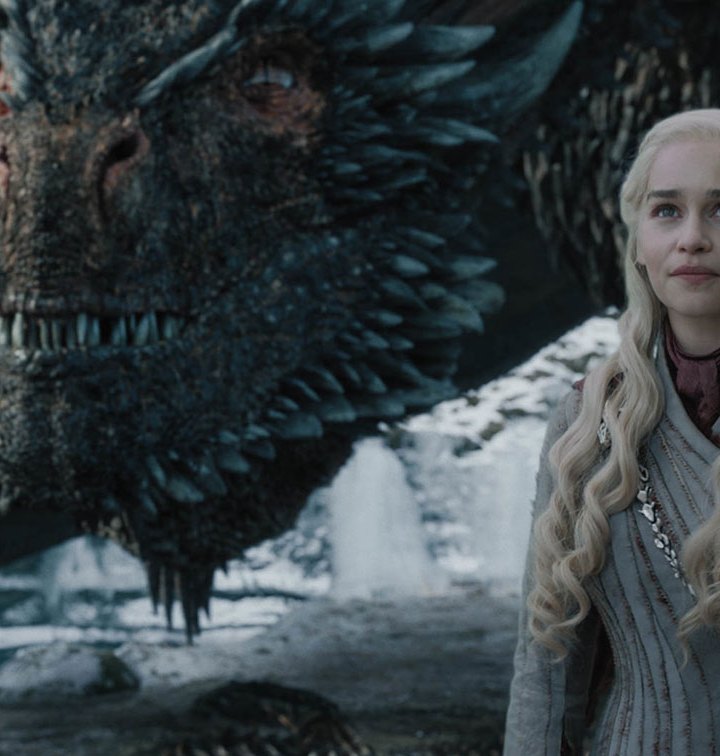 Yes, the secret about Jon/Aegon is officially out, and Varys and Tyrion are thinking about damage control. "Maybe Cersei will win and kill us all, that would solve all our problems," Tyrion muses. That's seeming more and more likely, too, as Dany and her dragons almost make it home to Dragonstone, but are ambushed by Euron and the Scorpion weapon, which quickly takes out Rhaegal. The Greyjoy fleet then decimates the rest of the Targaryen ships...and that felt way too easy. Also, R.I.P. Rhaegal!!!!

We don't even have time to mourn, though, because back at King's Landing, Cersei is trying to seem like a nice person by sheltering people in the Red Keep. She tells Euron she's pregnant with his child (false) and that their Lannister-Greyjoy child will rule the seven kingdoms (ugh, vom). We see that Missandei is her prisoner...and we almost feel more nauseous about this episode than we did during last week's battle.

Another quick convo between Varys and Tyrion: this time, about "the realm," who the true leader should be, and whether Dany/Jon as a couple (Jany, if you will) would be able to rule the Seven Kingdoms side by side as husband and wife. Varys reveals that he really would turn against his dragon queen if it meant saving more lives of the "realm." Tyrion begs him to remain loyal and not turn his back on her, but it's looking like that ship has already sailed. Varys is a true betting man.

Back at Winterfell, Jaime leaves for King's Landing, but not before telling heartbroken Brienne that Cersei's hateful, but so is he. Whether Jaime's reverting back to his old twin-sister-loving ways, or hoping to exact his revenge, the jury's still out. We're wailing with you, Ser Brienne. 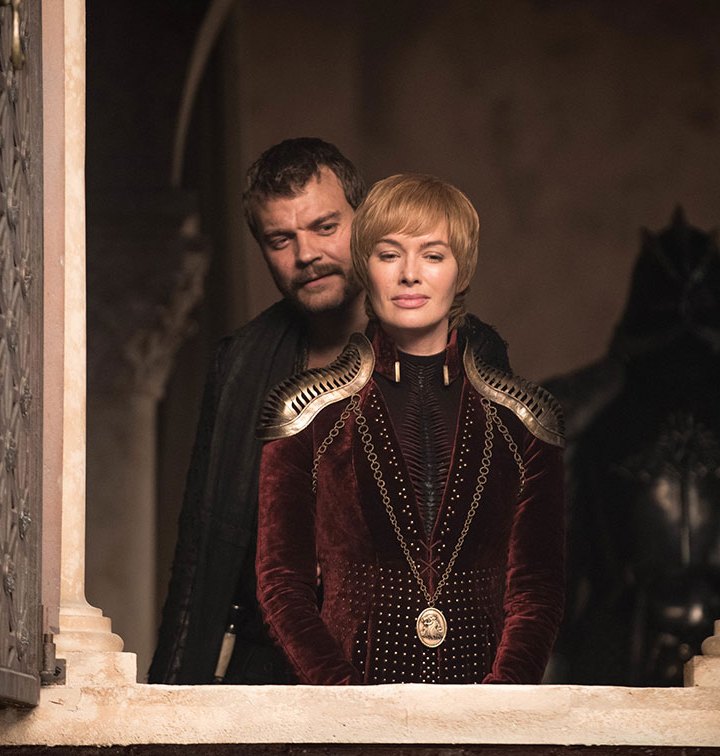 Dany, Drogon and her advisers show up at the gates of King's Landing (which, BTW, are covered in the same dragon-killing Scorpion weapons that took out Rhaegal) to demand Cersei's surrender, while Cersei does the same, but with an added twist: She'll kill Missandei if Dany refuses.

Tyrion and Qyburn try to negotiate, but Tyrion decides to bypass the slimy git and speak directly with the Evil Queen. He's almost a goner when all of the archers point their arrows at him as he approaches the gates to plead with his sister again, but Cersei refuses to give the order. He tells her she's not a monster (yeah, right), and tries to get through by begging her to think of her unborn child. We almost thought there was a chance in hell Cersei could be redeemed, but alas, she has the Mountain execute Missandei anyway after uttering her famous last words: Dracarys. With her death, Greyworm turns to Blue-worm.

Something changes in Dany's eyes when she sees her right-hand woman's headless corpse fall to the ground. She's lost Jorah, Rhaegal and Missandei. It's no longer about the great game or the Iron Throne. This time, it's about fiery hot revenge.