Only Margot Robbie Could Pull Off a Sequin Tunic at Cannes

When you're a certain type of stunning, you can get away with pretty much anything—at least when it comes to clothing. Margot Robbie is precisely that type of stunning, hence the semi-batsh*t look she wore for the premiere of Once Upon a Time in Hollywood at the Cannes Film Festival. It's the type of outfit you can really only pull off...if you're Margot Robbie. 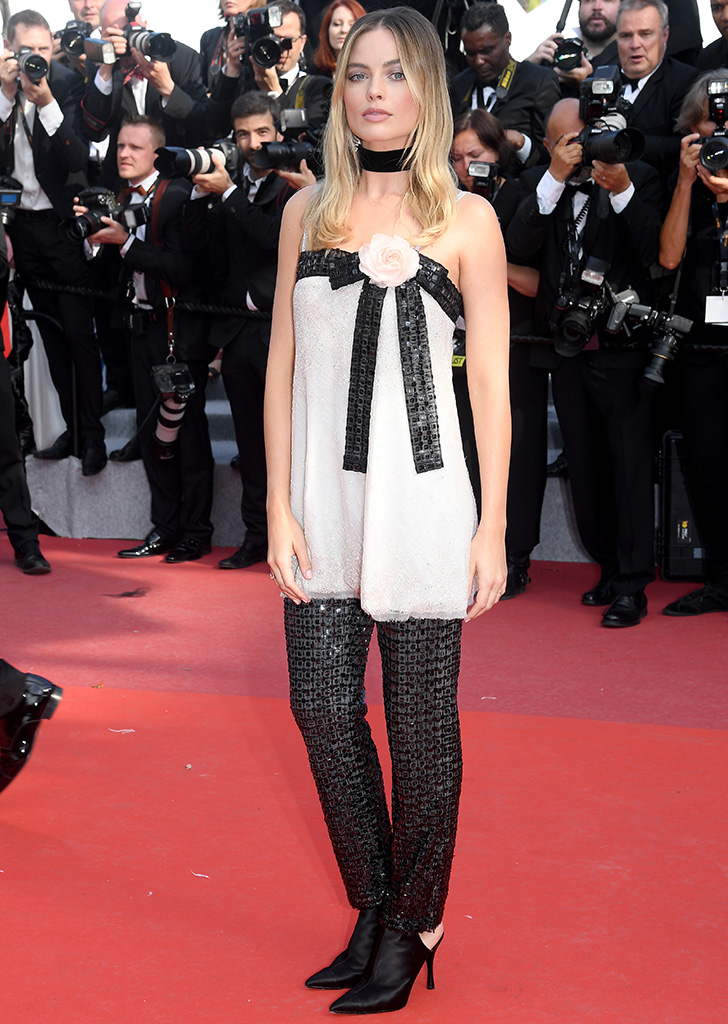 Her Chanel ensemble included black sequin genie pants along with a white tunic that was decorated with a bow and giant rose. She finished off the getup with a thick black choker, mule heels and statement earrings. It was the opposite of subtle, but somehow it works. Since Robbie's clothing choices were so loud, she seemed to opt for simpler hair and makeup, with rosy pink lips and loose, middle-part waves.

Once Upon a Time in Hollywood takes place in Los Angeles in 1969 as the last remnants of Hollywood's Golden Age start to disappear. The film will focus on a washed-up actor, Rick Dalton (Leonardo DiCaprio), and his stunt double, Cliff Booth (Brad Pitt), who live next door to Sharon Tate (Robbie), a murder victim of the Manson Family.

Last fall, Robbie opened up to Porter magazine about working with the film's director, Quentin Tarantino. “That’s a life goal,” she said. “When I first sat down with my team in America and they asked me what I wanted out of my career, I said: ‘Pie in the sky? Tarantino.’”

The experience, she says, lived up to her expectations.“Everyone asks me: ‘How is it? How is he on set?’ I’ve been on sets for pretty much the last ten years and I still walk on and think, ‘This is soooooooo coooool! Look at that! That’s amazing! Oh my gosh!’ I’m like a kid in a candy shop and then Tarantino walks on and he’s got the same, if not more, enthusiasm and he’s so excited. It’s his film set and he’s not jaded at all—he’s just so happy to be there.”

Robbie is just a kid in a candy shop, wearing a kooky Chanel look that somehow comes off asincredible. Yeah, we're pretty sure this is what having it all looks like.

RELATED: From Priyanka to Selena: These Are the Best-Dressed Celebs So Far at This Year’s Cannes Film Festival