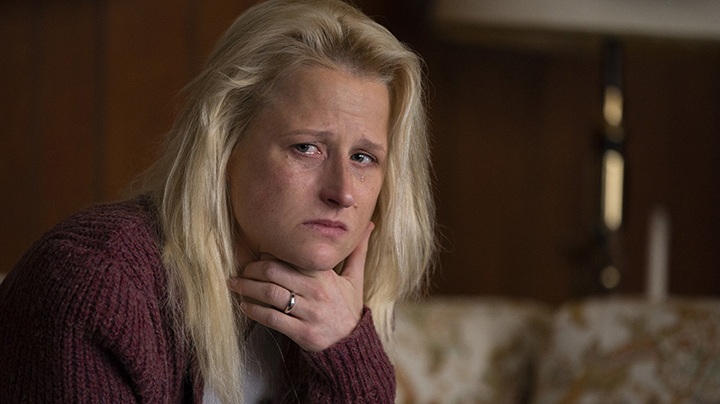 Episode three of True Detective aired last night on HBO, and while Julie’s kidnapper is still at large, we finally have an idea of who it could be.

I know, I know, we keep pointing fingers to the same household, but hear us out.

Lucy (Mamie Gummer) may not be the most faithful of wives, but what if she was aware that her children were somehow being abused in their home and she tried to keep them safe from it?

The tote bag with the notebook and the little notes telling the kids everything will be OK—that tote bag is from Lucy’s work. OK, they could have tons of those floating around the house, but for some reason, we, as viewers, are supposed to earmark it.

We found her staring at Wayne, as he went through Will’s room as if she was afraid he’d find something incriminating. That picture of Will, clasping his hands with his eyes closed, is one that only a few people—Will’s parents, mainly—would have paid attention to, right?

We know she works at the local bar, so she probably has her days free. What if she was the one trying to keep them out of the house, by playing with them in the forest? Maybe what happened to Will in the forest was an accident that she tried to cover up by turning it into a ritualistic murder scene?

Yeah, we’ve seen her, too—and she doesn’t seem sober enough to be this calculating, nor does she seem like Mother of the Year to us, either. But we’re keeping an eye on that Purcell house.

True Detective returns to HBO next Sunday, January 27, at 9 p.m.