Who Took Will & Julie in ‘True Detective’? All the Clues from Episodes 1 & 2 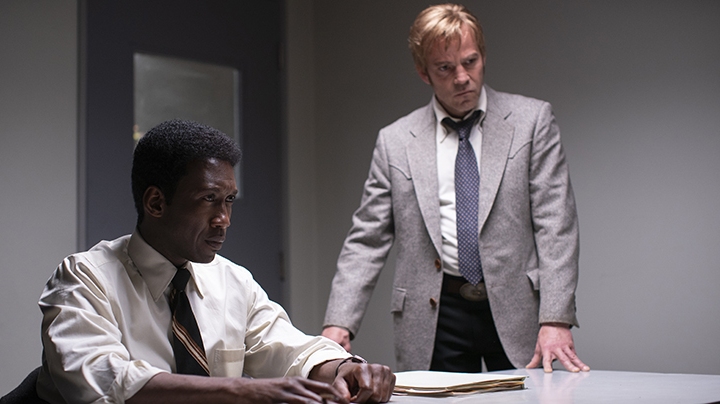 It’s the early days for season three of HBO’s True Detective, but what we know for now is that “a man” has taken the fall for the murder of Will Purcell and the disappearance of Julie Purcell, and while we’ve had plenty of suspects to point fingers at, there is one that keeps having fingers pointed at him.

“I did not believe he was fabricating—not about this,” says Wayne (Mahershala Ali), in episode one when, in the deposition, he is asked about whether he thinks Tom Purcell (Scoot MacNairy) was lying about not knowing where his kids are. This would, of course, indicate that somewhere along the line Tom has—or will—lie to the police.

We know the “man’s” family wants the conviction overturned, and the case will be reopened in 1990. We’re going to guess Lucy (Mamie Gummer) doesn’t care where her estranged husband spends the rest of his life rotting—assuming he’s in jail—but Tom’s parents, who even doubt that he is the father of Julie, would likely fight to get their son out of jail for a crime they believe he didn’t commit.

We also know something happened in 1990 between Julie and her father.

And there’s that hole in Will’s closet and Wayne’s flashback to, what we believe is, the remains of the Purcell house.

Of course, we have other people to be suspicious of. Maybe Brett “Trashman” Woodard misses his own kids so much it’s messed with his head more than Vietnam. Maybe the three teenagers who can’t determine what time they saw Will and Julie leave the park accidentally killed them and staged the cave scene. Maybe the neighbors we thought were kind casserole-making suburbanites actually engage in ritualistic murders.

The clues that don’t really fit anyone we’ve encountered so far—and this includes Tom, as well—are the creepy dolls. Tom doesn’t seem the type. And now there is a letter telling Tom and Lucy to stop searching for their daughter.

Guess we’ll just have to keep watching. True Detective returns next Sunday at 9 p.m. on HBO.