How Long Does Sushi Last in the Fridge? Here’s What to Know About Leftovers 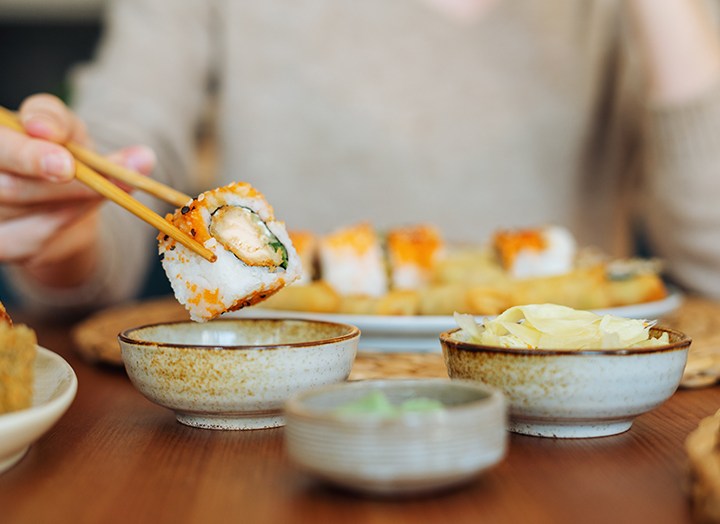 You treated yourself to sushi, but couldn’t put away every piece. You want to save those extra dragon rolls and all that salmon sashimi, so you ask yourself: How long does sushi last in the fridge? The good news is that you don’t have to bid your leftovers adieu straight away; the bad news is that you only have 24 hours to finish the job. And that’s just one of many things we learned from food safety and sushi experts Eric Jue and Brian Chau of Chau Time. Read on for the full scoop on keeping sushi fresh.

Sushi for Beginners Everything You Need to Know Before Ordering

How long does sushi last in the fridge?

There are different kinds of sushi, and not all of them feature raw seafood. That said, the experts tell us that the answer to the question at hand is the same across the board: Sushi of all kinds lasts up to 24 hours in the refrigerator. According to Jue, refrigerated sushi that contains raw seafood should be consumed within 12 to 24 hours, which is the standard recommendation at supermarkets in Japan. The same is true for sushi bought in the U.S., be it from a grocery store or restaurant. It’s not hard to understand the relatively small freshness window for sushi made with raw fish (anyone who has eaten spoiled seafood knows how that story ends), but you might be wondering why the same is true for vegetarian sushi or rolls that contain cooked seafood.

As you might have guessed, refrigerated sushi that contains cooked seafood or only veggies (a tempura shrimp number or simple avocado roll, for example) is safe to consume after the 24-hour period, and can last three to four days or up to a week in the fridge, respectively. Still, just because you can safely eat it, doesn’t mean you should: When it comes to cooked seafood and veggie rolls, Chau explains, “The issue is less about food safety if the cold chain is maintained (i.e. the sushi is kept refrigerated); the issue is oxidation (avocados brown) and moisture migration (seaweed gets soggy and rice dries up).” The takeaway? Even sushi without raw fish will be a shadow of its former self if left to languish in the fridge for more than a day.

How to safely store leftover sushi

So, you came home from dinner at your favorite sushi bar with something for tomorrow’s lunch, and your instinct is to just toss the takeout container in the fridge and call it a night. Alas, your sushi doesn’t care how much sake you drank, so you’d be well-advised to give your leftovers a little TLC to ensure they’re still up to snuff the next day. The good news is that best storage practice for sushi really only involves one quick and easy extra step. Simply wrap the leftover pieces of sushi tightly in plastic wrap and return them to an airtight takeout container before you stash ‘em in the fridge and tuck yourself into bed. This additional layer of protection will lock in freshness and slow the inevitable processes of oxidation and moisture migration mentioned above.

Sushi that contains raw fish is made with the highest quality (i.e., sushi grade) seafood, which is why it’s pretty much odorless. (If it isn’t, put down your chopsticks and take a hard pass.) As such, smell is one of the easiest ways to determine whether or not the sushi in your fridge is past its prime. Interestingly enough, Chau tells us that this is true not just of the seafood components, but also of the sushi rice itself. In general, if there’s any ‘off’ odor coming from your leftovers—be it fishy or funky—you’d be wise to play it safe and send them to the trash. For sushi with raw seafood, Jue tells us, “Discoloration and a slimy surface are [also] key indicators of sashimi gone bad.” Finally, Chau recommends checking the rice for signs of mold—‘cause that can happen and chances are it’s the kind you don’t want to consume (i.e., “not the koji type of mold that is used to make sake, soy sauce, and other ferments”).

Sashimi Vs. Sushi What’s the Difference?