How Big of a Turkey Do I Need for My Thanksgiving Dinner? 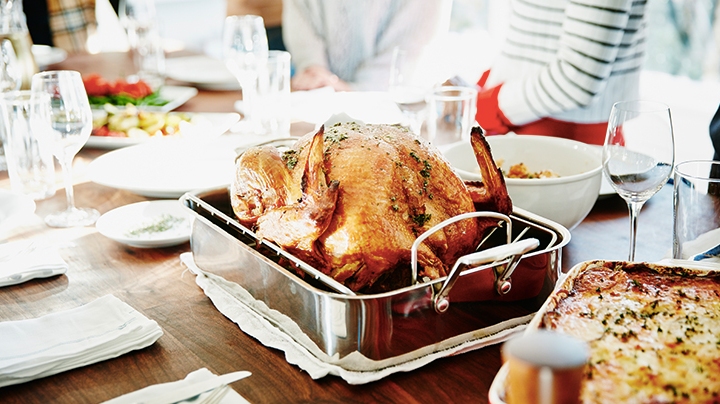 So you’re hosting Thanksgiving—Godspeed. You’ve got the potatoes (mashed), sides (green bean casserole or bust) and wine (lots of it) covered. And about the bird: You haven’t forgotten the most important part, but there’s just one eternal question left to answer. How big of a turkey do I need for my Thanksgiving dinner? Friend, we’re glad you asked.

First, how many people are you feeding?

What size turkey you should choose for your feast actually depends on a few factors, but the most important is the number of people who are eating it. The USDA suggests you allow one pound of turkey (both fresh and frozen) per guest. So if you’re serving ten people, you’d buy a ten-pound turkey—easy enough.

But do you want leftovers?

If you, like us, are more excited for the day-after turkey sandwiches than the actual holiday feast, one pound of turkey per person isn’t going to cut it. Instead, shoot for 1.25 to 1.5 pounds of bird for each guest. For example, you’d want to select a 12- to 15-pound turkey for ten guests. And if you know there are some particularly hungry guests in the group (i.e., your uncle who’s been known to go back for thirds), you can even bring that number up to 2 pounds per person. You’ll be guaranteed to have plenty of leftover turkey to pack up or send home with overfed partygoers.

Would you rather cook a big bird or a small bird?

We’re not saying there’s a right or wrong answer to this question, but…we are going to tell you that it’s *so much easier* to cook a small turkey than a gigantic one. For starters, there’s only so much bird your oven can hold. And the bigger the bird, the longer it takes to fully cook, which means you run a greater risk of having sawdust-dry breast meat by the time the legs and thighs are fully cooked. Smaller turkeys are easier to thaw, handle, fit in the oven and they cook much faster.

On the other hand, smaller turkeys also have a lower meat-to-bone ratio (read: you’re getting more bone and less meat per pound), so you’ll want to account for that if you decide to downsize—two pounds per person should suffice. That might mean cooking a few smaller turkeys instead of one.

The Golden Rule of Turkey

If all else fails, think of it this way: It’s better to have too much turkey than not enough. After all, leftovers are the best part.

The 23 Best Thanksgiving Turkey Recipes in the Universe

33 Goat Cheese Recipes That Are Just Right for Fall (or Any Time, Really)