The New 4Moms MamaRoo Swing Is Safe, High-Tech and Totally Worth It  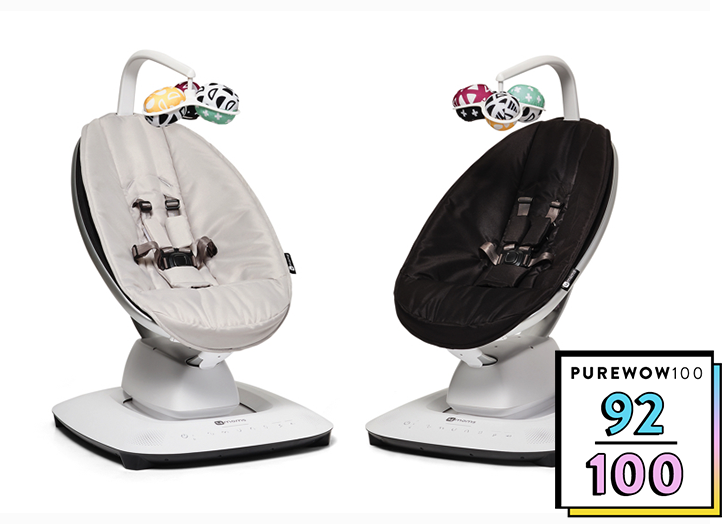 Before your baby’s arrival, I bet you couldn’t wait to hold them in your arms. Except when you finally welcomed your newborn and that’s the only place they wanted to be all. The. Damn. Time. At least, that was the case with my daughter, who would wail like a banshee every time we tried to put her down. We tried the Boppy, the Dock-A-Tot, multiple playmats…she hated every single one. Enter a baby swing—the genius device that soothes fussy kids and gives parents a much-needed break. And the Rolls-Royce of baby swings is the MamaRoo. Here’s what you need to know about this clever baby product, including safety, longevity and whether or not it’s worth the price tag.

Nope. On August 15, 2022, a recall was issued for the MamaRoo Baby Swing versions 1.0 through 4.0 due to restraint straps attached to the back of the unit posing a strangulation risk to crawling infants. This latest model (model 1046) solves that problem by attaching the strap to the seat instead. If you have one of the earlier models and any crawling infants at home, you should immediately stop using the swing, store it in a location where it can’t be reached by crawling infants and contact 4moms to receive a free strap fastener that will prevent the strap from dangling precariously when a baby is not in the seat. The recalled versions of the MamaRoo are safe to use after installing the strap-fastener. 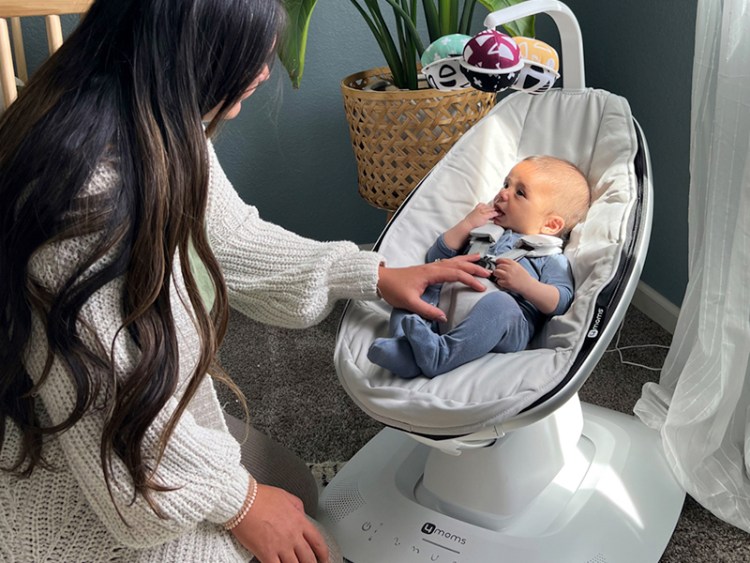 OK, Got It. So What Does This New MamaRoo Actually Do?

Like previous models, the main draw of the MamaRoo is the unique range of motions. While most baby swings do a back-and-forth sway, the MamaRoo has five parent-inspired motions (Kangaroo, Car Ride, Tree Swing, Wave and Rockabye) and five speeds, plus an adjustable recline to keep baby comfy. Not sure which speed is quite your baby’s, um, speed? Well, here’s where the updated model shines. The free MamaRoo app has a new “Find Your Roo” function that lets parents find the device’s rocking motion that best mimics their own rocking. Simply start the app and start rocking your phone as if it was your baby (and yes, you’ll feel ridiculous, but anything to calm a fussy newborn, right?). The app then recommends which motion to set your Roo in order to make the transition from your arms to the swing as seamless as possible. After testing out the app, MamaRoo concluded that Kangaroo (a sort of up-and-down bounce motion) and speed four was the movement that would best mimic my own rocking. And actually, the app was actually pretty accurate—I alternated between Kangaroo when I wanted to put her down for a few minutes while I went to the bathroom/folded laundry/drank my now-cold coffee, and the Car Ride (a sort of figure-eight motion) when she was being particularly fussy and needed some help to calm down.

You can also use the app to control the sound and movement of the Roo. In terms of sounds, there are four different ones to choose from or you can stream your favorite music from your smartphone (Beach Boys was my daughter’s favorite, highly recommend). I have to say that I really liked the ability to control the movement with my app—it was helpful when I heard her start to get fussy but didn’t want to stop chopping carrots for dinner or when I suspected that going over to her would just make her more fussy. As for the sounds, they were…fine. They’re actually pretty quiet and it sometimes seemed like some of the noises were a bit crackly. But to be honest, my daughter didn’t seem to notice or mind.

There’s also a toy mobile with a mirror, rattle and crinkly toy to keep baby entertained, although my daughter didn’t really care too much for it. Maybe if the mobile could move or was within grabbing reach then it might have more appeal.

The MamaRoo is actually one of the more compact models on the market, at 26.25 inches by 23.5 inches by 35.5 inches and weighing 15 pounds. (Compare this with the Graco Glider that comes in at 26.25 inches by 23.5 inches 35.5 inches or the Fisher Price Sweet Snugapuppy swing that measures 35.04 inches by 44.02 by 37.01 inches). The swing can be used from birth to 25 pounds, although I suspect that most babies stop being interested in sitting in the swing as soon as they can sit up independently, which is exactly what happened with my daughter around 5 months. But if your baby is less wiggly than mine, you could easily continue to use the Roo by transitioning from the three-point harness (best for littles) to the five-point one (better for older kids).

Everything is machine-washable (including the toys if you decide to take them off to use as a teething toy). And yes, I did take advantage of this feature—I’m happy to report that a spin in the machine can get rid of both spit up and poopsplosions. (Note: The straps cannot be removed and washed but they’re pretty easy to wipe down.)

Finally, parents will be relieved to know that the Mamaroo is easy to assemble. OK, I’ll admit that I didn’t actually do this, but according to my spouse, it took less than ten minutes and there were no tools required.

Any Other New Features?

In addition to the new app functions previously mentioned and the convertible three-point to five-point harness, there is also a new touch-sensitive control panel that feels much sleeker than previous models. The new MamaRoo is also compatible with Alexa and Google Home.

The 4Moms MamaRoo is a multi-motion baby swing that frees up your arms and keeps the baby happy. Compared to previous models, this updated version has a few cool new features (like the “Find Your Roo” app function and touch-sensitive control panel), plus extended longevity thanks to the convertible harness. The biggest downside is the cost—at $300 it certainly isn’t cheap, especially considering that you will likely mostly use it for the newborn stage (i.e., 0 to 3 months). But for those exhausting, draining, confusing months where you’ll do anything to calm a screaming baby or have a cup of coffee in peace, the Roo can be a real lifesaver.

family
by Abby Hepworth
27 Gifts for Cat Lovers (and Their Feline Friends)
family
Sponsored
Soccer World Champion Allie Long Has a Podcast Called ‘Mom Goals,’ and It's Our New Must-Listen
family
by Jillian Quint
My Kids Ruined My Spotify Wrapped A *Little* Bit Less This Year
family
by Emma Singer
“It Wasn’t Me, I Swear!” Here’s What to Say When Your Kid Lies to You (and What Not to Do)
family
by Rachel Bowie
‘Jellyfish Parenting’ Is the New Tiger Mom-ing. We Say, Hell Yes! 
family
by Suzanne Zuckerman
Parenting Tweens Is *Supposed* to be Messy–This Advice Can Help