What Happened to Cabbage Patch Kids, the Dolls That Caused a Huge Frenzy in the ‘80s? 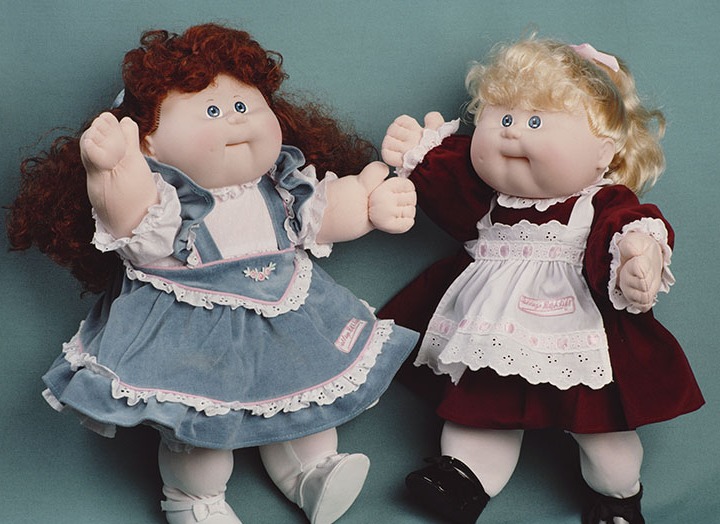 If you’re an ‘80s baby, either you were obsessed with Cabbage Patch Kids or you never understood the hype. The dolls were huge in the early ‘80s, and for some people, they’re still cherished collectibles today. There have been some revisions over the years, but they’re still immediately recognizable by their round faces, rosy cheeks and squishy, cloth bodies.

This was one of those trends that crossed age thresholds while also saturating the youth market. It wasn’t just parents buying them for their ﻿young kids—tweens were loving them too. The level of demand for the toys was wild, and the lengths people went to get their hands on these things was like something from a Black Friday nightmare.

The original Cabbage Patch frenzy has settled, but why did the kind-of-creepy baby dolls become such a thing—and are they even still around? We explain it all on PureWow's nostalgic pop culture podcast, 'What Ever Happened To...?'—where we come together to relive pop culture history and uncover what became of the celebrities and trends that defined our adolescence.

What is the story of Cabbage Patch Kids?

The Cabbage Patch Kids were born, according to the brand’s website, in 1976 when a 21-year-old art student from Georgia named Xavier Roberts combined his interest in sculpture with the quilting skills he learned from his mother. He began creating soft-sculptures, using a German fabric technique called "needle molding” from the early 1800s. A couple years later, Xavier began showing off his one-of-a-kind creations, which he called Little People Originals, at arts and crafts shows. He even snagged a first place ribbon at the Osceola Art Show in Kissimmee, Florida, for his doll named Dexter.

Building on his success, he renovated an old medical clinic in Cleveland, Georgia, into “BabyLand General Hospital,” a store made to look like a birthing, nursing and adoption center for the dolls. The toys even came with a birth certificate and adoption papers. (Just wait—it gets weirder).

In 1981, marketing mastermind Roger Schlaifer came into the picture. Together they developed a mass-market, plastic head version of the dolls, which they renamed Cabbage Patch Kids, and took their show on the road. Apparently, they reached out to a bunch of toy companies, and allegedly were turned away because the dolls were too ugly (no argument here). But then, they found Coleco.

Roger told Syracuse University Magazine in 1988, "It was ideal timing for us. Smurfs had had their day.  E.T. passed quickly.  Strawberry Shortcake was on the wane.  We saw a vital opportunity, timing-wise, to position Cabbage Patch Kids. All the psychological factors were right. It wouldn't have happened, I don't think, three or four years earlier."

The toys began appearing in major publications like Newsweek, The Wall Street Journal and Atlanta Weekly, who were all marveling at their ballooning popularity. By 1983, it was a full-on Cabbage Patch craze. The proud new parents (er, owners?) even had to recite an oath before taking their treasures home. At first, the kiddos were going for $40 a pop—but once they started getting really popular, product shortages caused a price spike. By 1983, TIME reported prices ranged from $125 to $1,000.

But let’s circle back to that origin story, shall we? There’s another version of events that was detailed in a documentary which premiered at the 2022 Tribeca Film Festival. It’s called "Billion Dollar Babies: The True Story of the Cabbage Patch Kids,” and it’s narrated by Neil Patrick Harris.

According to the documentary, Xavier Roberts might not be the true creator of Cabbage Patch Kids. The film says there was a legal battle between Xavier and a folk artist named Martha Nelson Thomas, who passed away in 2013. The movie claims Xavier stole the original design from her.

In 2015, Vice also covered this side of the story when they traveled to Kentucky to meet with Martha's friends and family and tell her side of the story. Martha's husband, Tucker Thomas, claimed in a video that Xavier not only ripped off the design of Martha's Doll Babies, but that the whole adoption concept was Martha's as well. Those close to Martha claimed Xavier purchased Martha's dolls at a fair and she denied him permission to sell her dolls, and that's when he decided to take things into his own hands.

Martha's attorney, Jack Wheat, told Vice, "The lawsuit was filed, if I recall correctly, about 1979; and I believe it ultimately went to trial in 1985. It was about 6 years of pretrial wrangling which wasn’t uncommon in those days. At some point, in the middle of the trial, Xavier Robert’s council approached me and said, 'Let’s discuss a settlement,' and that day, the case settled."

So, what happened to Cabbage Patch Kids, anyway?

Let’s rewind back to the late '80s. The dolls’ popularity was diminishing, and the toy company Coleco filed for bankruptcy. Enter: toy and game mega-producer Hasbro, which is a household name in the toy biz. Think My Little Pony, Transformers, Play-Doh, Monopoly, Power Rangers…the list goes on and on.  And, in 1988, they added the production rights for Cabbage Patch Kids. The entertainment giant set to work with some revamps for the wilting brand, like shrinking the babes from 16 to 14 inches, so little ones had an easier time playing with them.

Cabbage Patch Kids also made their way to the small screen. An animated special called The Cabbage Patch Kids' First Christmas premiered on ABC in 1984. By the ‘90s, this included a bunch of stop-motion TV specials too—there was The New Kid, The Club House, The Screen Test, Saturday Night and Vernon’s Christmas.

In 1994, the production rights passed to Mattel. But not all their plans for the garden babies went as planned. In 1997, The Washington Post reported they had to recall their recently-launched Snacktime Kids because the mechanized dolls were munching on kids fingers and hair, instead of the plastic snacks they came with. Oops!

In 2001, Toys "R" Us took a turn, producing 20-inch kids and 18-inch babies until 2003. Then, the company Play Along released a Cabbage Patch Kids 25th Anniversary collection using some of the original head sculpts from the first Coleco editions. If you missed that, they also released a 30th birthday collection in 2013, so who knows, maybe a 40th edition is on the horizon, in case your inner child is still obsessed.

You sure can! Wicked Cool Toys is the company who makes them now, and they're available for sale on the official Cabbage Patch Kids website, along all your favorite toy-selling retailers like Target, Walmart, Amazon—you name it.

The company also released a family of Cabbage Patch-related toys called Little Sprouts, which are tiny baby, kid and pet figures, and Adoptimals, which are plush pets for the kids. They also have Cabbage Patch "Cuties," which are 9-inch, thumb-sucking babies wearing﻿﻿ cute animal costumes. But if you want to keep it really authentic, you can adopt a hand-stitched, completely one-of-a-kind doll beginning at a mere $260. If a basic Cabbage Patch kid is good enough for you, those range from around $15 to $60.

And for those who are still really into collecting the cuddly cherubs, Babyland General Hospital still exists in Georgia. It’s basically a museum-meets-nursery—and yes, they still make a whole to-do of the dolls being birthed.

So, what ever happened to Cabbage Patch Kids? A whole lot—but they’re still around ﻿and people still love them.﻿