Ted Lasso believes in communism. Rom-communism, that is. In one of his signature out-of-left-field motivational speeches, everyone’s favorite goofball football coach spelled out his love of romantic comedies and in turn set up ‘Rainbow’ (season 2, episode 5) to become an all-out ode to the movie genre with more references than we could count (though we still tried). In what was easily the best episode of the season thus far, the writers pulled inspiration—and often direct quotes—from some of the best rom-coms of all time, including When Harry Met Sally, Jerry Maguire, Notting Hill and so many more.

Here is a list of every rom-com reference we caught from the most recent episode of Ted Lasso. 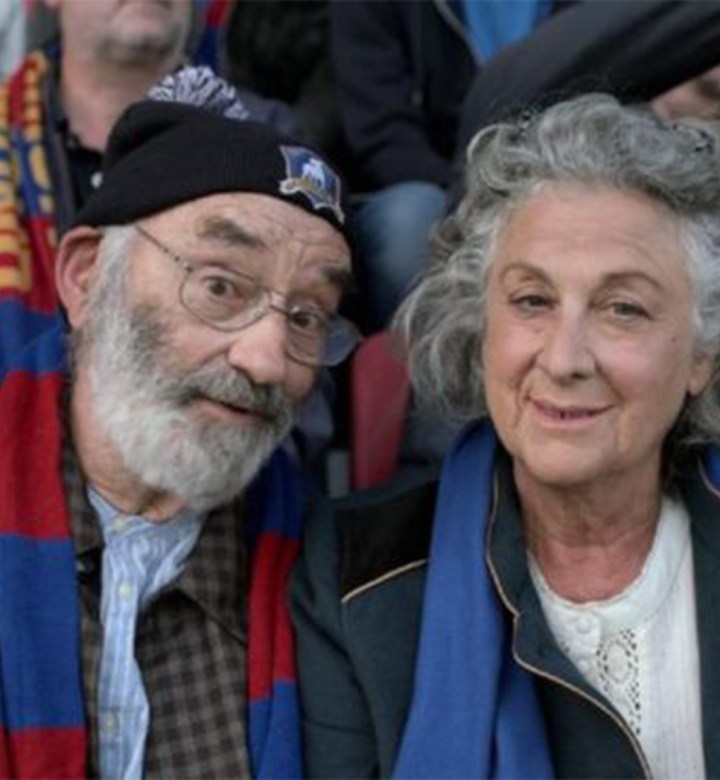 No romantic-comedy homage would be complete without at least one shoutout to this old-school favorite. And luckily this episode gives us a slew of fun references to Meg Ryan and Billy Crystal’s love story.

The older couple at the match
This is probably the most obvious nod to a classic rom-com, mirroring the camera-facing couples interviews scattered throughout When Harry Met Sally. Even better, this couple’s love story ends with them telling the audience James Cameron stole their tale to use in Titanic and they’re all now entangled in on-going litigation. (The historical drama certainly isn’t a comedy, but it is a romance for the ages, making this an especially fun twist.)

“I'll have what he’s having.”
Of course it’s a natural fit to have Ted use the most quoted line from the film to place his order at Roy Kent’s beloved kebab restaurant.

Roy running in the snow
After exiting the studio in the final sequence of the episode, Roy looks up to discover it’s snowing before taking off at a run to ultimately hop in a taxi and make his way to Ted. This mirrors Harry’s New Year’s Eve run to find Sally, which also happens in the snow. 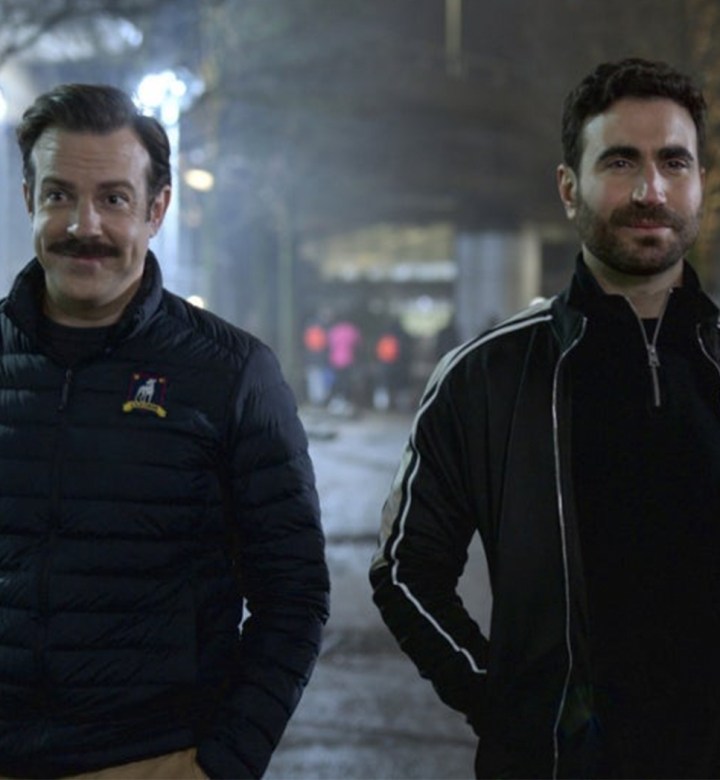 This Tom Cruise classic isn’t necessarily at the top of our list of best rom-coms, but there’s no denying it is chock-full of quotable lines we just never seem to grow tired of.

“You complete our team.”
The second line in Ted’s rapid-fire rom-com quote run is an obvious near-direct quote from Tom Cruise’s character.

“You had me at ‘coach.’”
Another overt reference, the very last line of the episode is just one word away from the most iconic moment in ﻿Jerry Maguire﻿. Who knew Roy Kent had such a soft spot for Renée Zellweger movies? 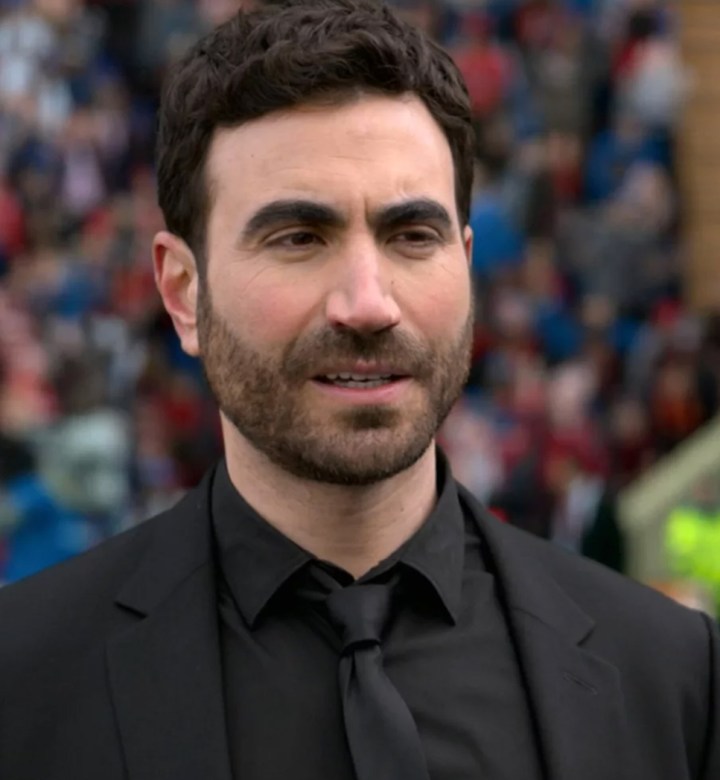 Tom Hanks and Meg Ryan are *the* rom-com power couple, and we’re glad the writers at ﻿Ted Lasso ﻿saw fit to include their work in this episode.

“Jeff, I have to go now.”
This is the line Meg Ryan uses to leave her fiancee Walter at the climax of the movie. Brett Goldstein (who plays Roy Kent) absolutely nails his delivery of the very same line just before running out of the studio for a stereotypical last-minute sprint to declare his love. Or, in a more Roy Kent move, tell Ted Lasso to shut up.

The taxi race
After quitting his pundit game on air, Roy attempts to race to the Richmond pitch by running to catch a cab. However the taxi can only get him so far, just as Annie’s cab gets stuck in traffic on her race to the Empire State Building. Annie ends up running the rest of the way, while Roy hops in a pedicab, which in this case is a fun callback to season 1.

That said, some may argue the taxi race and Roy’s subsequent knee mishap are in fact a reference to ﻿Bridget Jones: Edge of Reason﻿ when Bridget races to Mark Darcy in a taxi only to be doused in water by a passing truck. Realistically, there are multiple movies in which someone races to find their love, arriving in just the nick of time, so there are many arguments that could be made here. 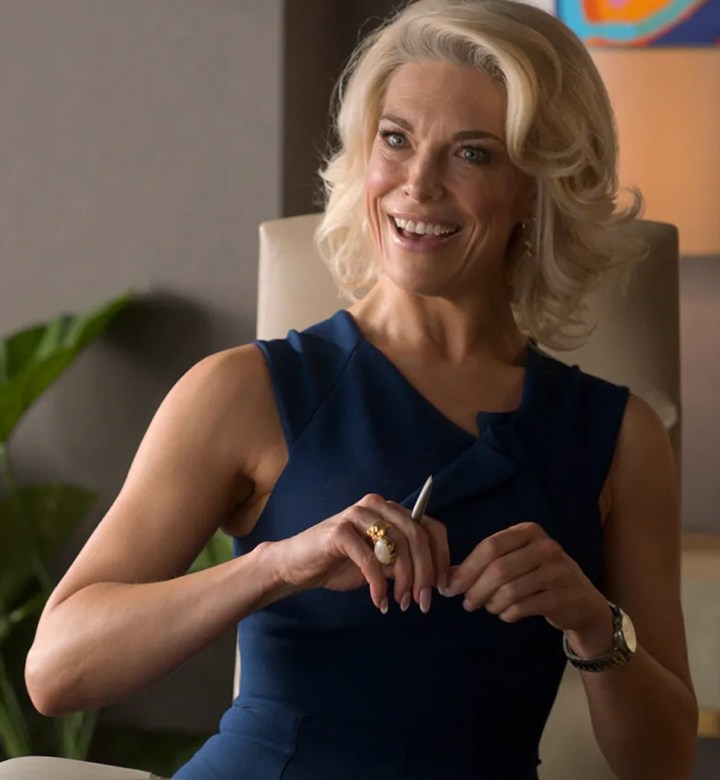 ‘four Weddings And A Funeral’

Can you even make a U.K.-based comedy and ﻿not﻿ include a reference to one of Richard Curtis’s films? We think not.

Rebecca’s suitor quoting Rainer Maria Rilke
This is definitely the most subtle, deep-cut reference made throughout the episode. Rilke was the mentor to and had a great impact on the works of W.H. Auden. Auden’s poem “Funeral Blues (Stop All The Clocks)” is read during the funeral scene of this Curtis film from 1994. It is definitely an indirect nod, but we think it’s unlikely to simply be a coincidence. 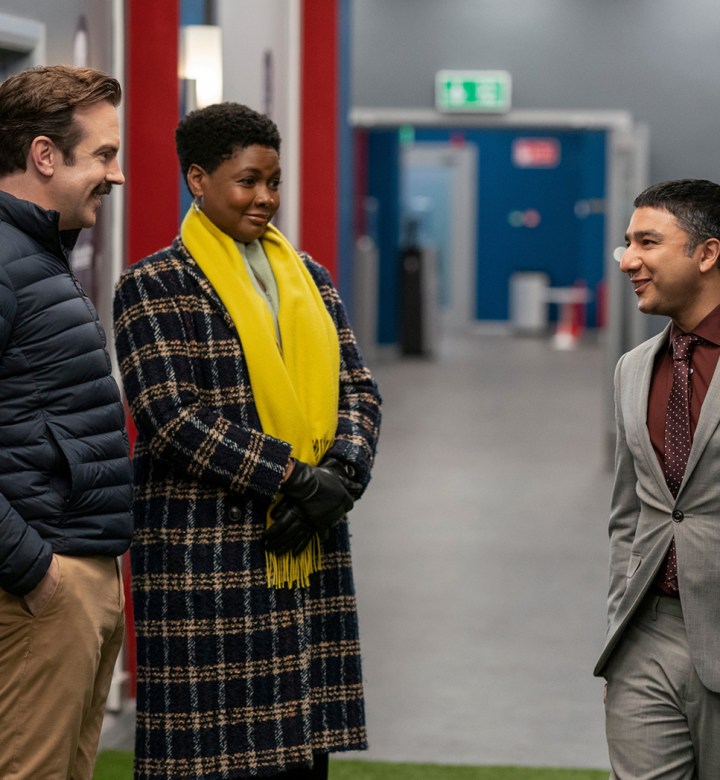 And All The Rest

One can only fit so many romantic-comedy scenes in a 38-minute episode of television. As such, some of the best are tossed in with a simple quote or mention.

The 3 Kates
The team listing their favorite rom-com stars is, as a whole, wonderful, but it’s Jaime Tartt’s reference to the Three Kates—Beckinsale, Hudson and Winslet—as a power trio of romantic-comedy prowess that really takes the cake. And as Nate shyly adds from the side, Cate Blanchett should likely be included as a fourth superstar.

﻿Notting Hill
﻿First he tried When Harry Met Sally, then Jerry Maguire and lastly Ted caps his plea to have Roy Kent join the Richmond coaching team with the delightful, “I’m also just a coach, standing in front of a boy, asking him...” Although he never gets to finish the line as Roy cuts him off with a predictable expletive-laden rejection.

The Princess Bride
After firmly shutting Ted down, Roy walks away from the coaching offer, but not fast enough to avoid one last “as you wish” thrown out in true Westley fashion.

Nate’s makeover
Keeley and Rebecca help Nate to gain more confidence in a scene reminiscent of pretty much any makeover sequence from any rom-com. It’s a staple of the genre, and it’s only fitting to have at least one character follow this arc.

The Higgins’ love story
The through line of this episode is the love between Leslie and his wife. And while it appears to be an original story, not taking reference from any of the big-name romantic hits, it’s definitely worth calling out in a discussion of the most lovely parts of this episode. Most notably the couple’s reunion on their way to the match where actors Jeremy Swift and Mary Roscoe look so genuinely in love (even after 29 years of marriage and five sons), while their song, ‘She’s a Rainbow’ by The Rolling Stones, plays over the scene. It feels a bit like the end of Love Actually with all the loved ones reconnecting at Heathrow airport, but is made doubly sweet by focusing on just the one pair.

Who Is Hannah Waddingham? Here’s What We Know About the ‘Ted Lasso’ Star