An Honest Review of the #2 Show on Netflix Right Now: ‘Bridgerton’ 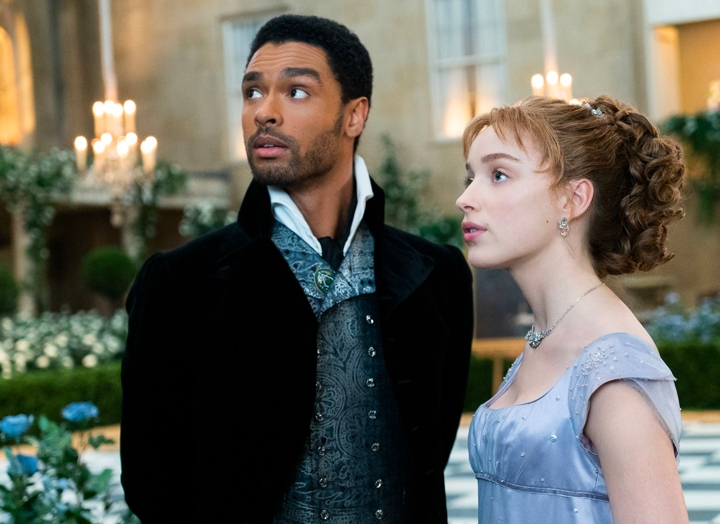 During the holidays, I depleted a bunch of content I'd been carefully rationing since the beginning of quarantine—aka Euphoria (I thought it would take me way longer, but apparently if you work hard enough you can finish the entire first season in 48 hours!). So, with nowhere else to turn—and no, breaking into the Star Wars extended universe was not on the table despite my husband's insistence—I decided to dip my toe in this Bridgerton thing the Twitter-verse was a-chatter about. Long story short: I binged the first (and only) season in two days, and here's my honest review.

﻿﻿Based on the eight-novel series by Julia Quinn, Bridgerton is a period drama(ish) taking place between 1813 and 1827 about the eight children of the late Viscount Bridgerton: Anthony, Benedict, Colin, Daphne, Eloise, Francesca, Gregory and Hyacinth. In Netflix's first season, we revolve mostly around Daphne (Phoebe Dynevor), the eldest sister of the crew, and her struggles (and successes) through "courting season," where London society bustles with dreamy balls and promenades as of-age debutantes and gentlemen dance to orchestral Billie Eilish string arrangements in hopes of landing a marriage union that elevates their family on the aristocracy ladder and pleases the queen—whose only concern seems to be not the far-off war we occasionally hear about, but the love lives of the up-and-coming socialites. So yeah, that's the Pride and Prejudice part.

The Gossip Girl part? Well, despite the face of propriety, there is ample dirty laundry to air and scandals to unfold...which is where Lady Whistledown comes in. The narrator of the series, voiced by Julie Andrews, Whistledown is the mysterious scribe of a salacious newsletter somehow uncovering the juicy details of courting season. Although no one knows who Whistledown is, the author's words become gospel. If Whistledown says you're hiding a scandal, your courting season is donezo, which is how Daphne and the hunky Duke of Hastings Simon Basset (Regé-Jean Page) take it upon themselves to fool Whistledown and "write" their own narrative. What follows is basically sexual-tension-filled Mr. Darcy and Elizabeth Bennet fanfic—of which I'm not complaining.

Is Jane Austen rolling in her grave at a campy take on Regency-era courting? I doubt it. In fact, I think she'd get a kick out of it.

Now, on a scale from zero to Outlander, how much is Bridgerton essentially full-blown erotica wrapped in a period piece? Probably a 6? Yes, there are some butts and a couple sets of boobs, and some graphic-adjacent sex scenes, but does it really live up to its TV-MA nudity, violence and sexual situations guideline? Yes-ish, but I'd describe the explicit scenes as "network drama given a little more leeway" than, say, The Sopranos, or even, the gold standard of horny period pieces, Outlander. Nevertheless, this is probably not the Netflix series to stream with your parents or kids. Like most hyper-sexual historical fiction, it is best consumed while everyone else in your house is napping.

It's bright. It's grand. And it's easy to follow

Sure, Bridgerton is "historical" in that it takes place in 19th-century London and has hints of inspiration from real things (like the real King George's mental illness, and the societal rules of propriety), but this is not the 19th-century London, this is a 19th-century London. And honey, in this world, spring has sprung! The colors are vivid. The honeybees are pollinating. And flowers are in full bloom. The Featherington women (another society family in the throws of courting season) don bright chartreuses, yellows and oranges with floral appliques the likes of which you might find at your local Anthropologie. The Duke of Hastings makes 1800s formalwear seem like chic streetwear. And despite taking place in a feudal economy where rank, title and gender dictate your past, present and future, even the peasants are clean and happy.

There's also the diversity of the cast. Yes, there are brown people in England's gentry—including the queen! While I didn't think the inclusivity needed any rationalizing beyond creative choice, there is a flimsy attempt at explaining it away: Apparently racism ended when King George fell in love with a Black woman, and that was that. There is no discussion of skin color or race relations beyond that. This means that somehow Bridgerton manages to be almost entirely escapist while also feeling contemporary.

And while the pilot may confuse some viewers as you get to know who's a Bridgerton and who's a Featherington, the focus really just stays on those two families and the characters who orbit their lives—the queen, the duke and some other friends. Once you get the hang of it (memory trick: the Bridgertons have brown hair, the Featheringtons have red hair), you're good to go. You could even cook dinner as Daphne and the duke romp through the garden—but definitely turn off the stove when things get heated, OK?

The best part about bingeing Bridgerton in one weekend is that I feel like I accomplished something. The storylines wrap up and mysteries are solved. Don't let anyone tell you there's no such thing as a fairy-tale ending, because Bridgerton basically ties it up with a bow and gifts it to you. And even then, I'm looking forward to season two, which I'm assuming will focus on the very capable, smart and Elizabeth Bennet-ty Bridgerton, Eloise, as she begrudgingly embarks on courting season.