Xeomin vs. Botox: What's the Difference Between These Two Wrinkle Fighters? 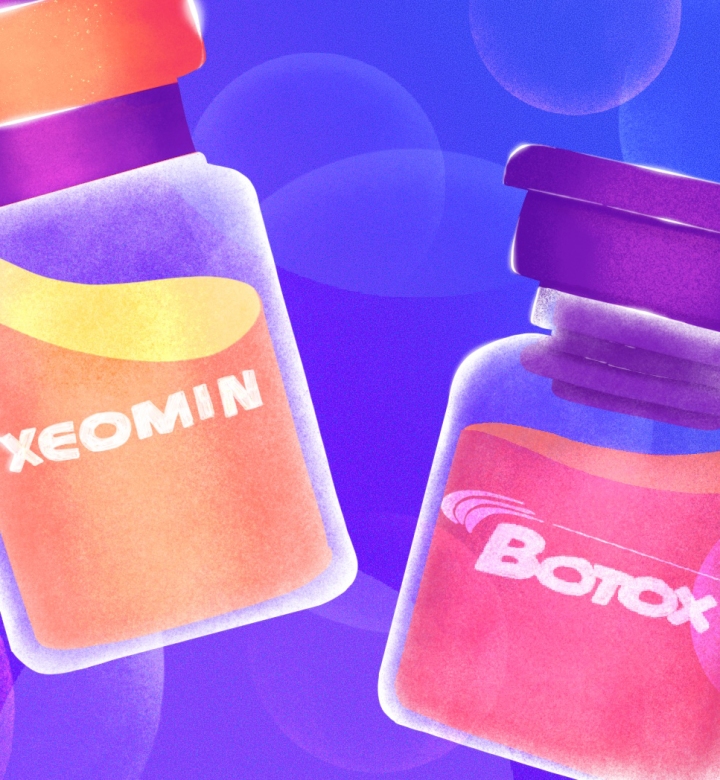 Let’s start by clarifying: Botox is a brand name for the injectable treatment that is used to smooth wrinkles and fine lines between the brows and on the forehead. Because it’s been around the longest and has been studied the most, people often use the term “Botox” as a catchall to describe this type of treatment even though there are several different brands that are currently FDA-approved for cosmetic use: Botox, Xeomin, Dysport and Jeuveau.

All four of these treatments fall under a class of drug called neuromodulators, which is defined by Merriam-Webster as: “something that potentiates or inhibits the transmission of a nerve impulse but is not the actual means of transmission itself.” Or, as we recently explained to our friend, Botox and other neuromodulators work by temporarily blocking the nerves of the facial muscles that create wrinkles.

How are Botox and Xeomin similar?

Both are made with a form of botulinum toxin type A, a protein substance that is used to reduce the appearance of fine lines and wrinkles caused by repetitive facial expressions (i.e., from squinting at your computer screen all day or frowning while you sit in daily traffic). When injected into the muscles underlying these areas, they block the signals from nerves to muscles, so they keep from contracting. The result? A smoother visage until the treatment wears off in a few months.

How are they different?

Another big difference between the two drugs is “Xeomin doesn’t include an extra protein additive that’s included in the other [neuromodulators],” explains Dr. Samantha Kerr, the chief science officer for Merz Aesthetics, who manufactures Xeomin. Because of this, Xeomin is sometimes referred to as “Naked Botox” and is touted as “being less likely to create allergic reactions” because there are fewer ingredients in the formula.

That said, from what we know so far, both treatments show similar effectiveness after four months (the typical length of treatment).

How do they compare in cost?

There isn’t a marked difference in price between the two. Your total cost will vary widely based on how many units of the drug are used, as well as the skill level of your injector and the local market of where you’re getting the treatment. All in, you can expect to pay anywhere between $300 to $1,000, which we know is a very wide range. To get the most accurate estimate, consult with a board-certified dermatologist in your area.

So, how do I decide between the two?

If you haven’t tolerated Botox or other neuromodulators like Dysport well in the past, or the idea of extra additives in your treatments makes you nervous (a la Gwyneth Paltrow), then Xeomin could be a good alternative for you.

Ultimately, the most important decision to make when getting any cosmetic injectable is who will be administering the treatment. Do your research, ask questions, and communicate or better yet, show, the results you’re hoping to achieve.

I Was a Botox Skeptic...Until I Tried It (Watch It All Go Down)

beauty
by Greta Heggeness
‘What the Dupe’: We Compared the Fenty Beauty Glow Drops with an $18 Dupe
beauty
by Jenny Jin
From Spiky Buns to Velvet Nails, Here are 16 Beauty Trends That Will be Everywhere in 2023
beauty
by Jenny Jin
10 Genius Beauty Tips We Learned on TikTok
beauty
by Jenny Jin
The 15 Best-Smelling Body Washes for Every Preference
beauty
Sponsored
TikTokers Can’t Stop Talking About This Gift for the Holidays
beauty
by Chelsea Candelario
TikTok Fact Check: Can You Really Use Dandruff Shampoo to Clear Acne?