Does Drinking Water Help Acne? Is It Really the Secret to Clear, Glowing Skin? 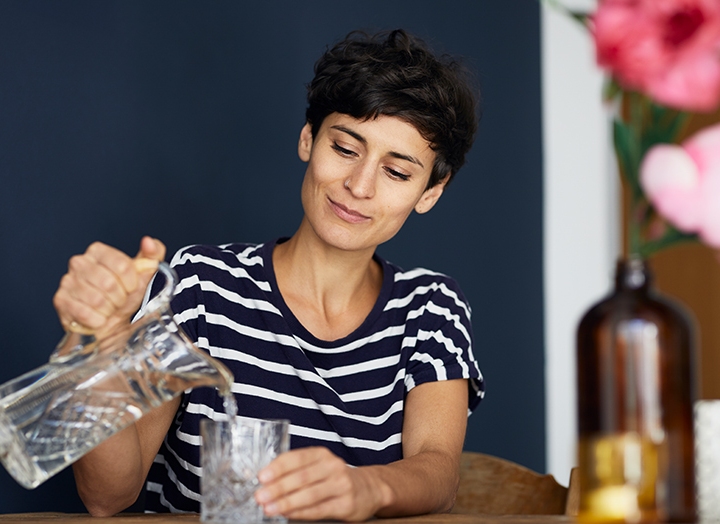 “What’s the secret to your glowing skin?”

It’s a question that comes up often in celebrity interviews, and often, the dolphin-skinned actress or model attributes their impossibly clear complexion to drinking lots of water. Which makes us wonder…does drinking water help your skin? After going down many rabbit holes of research, the short answer is no.

Or, rather, there’s simply not enough evidence that drinking more water has a direct correlation to how good your skin looks. Though there are definite health benefits to drinking water (which we’ll get into below), it doesn’t directly hydrate your skin the way, say, a moisturizer does. And that’s because of the way water moves through our bodies.

When water enters your mouth, it travels through the esophagus before making its way to your stomach, where much of it is absorbed, before entering your small intestine, which then makes its way into your bloodstream, so the rest of your cells and organs get the hydration they need to perform daily functions.

To be crystal clear (like the liquid in question here), you should still make sure that you’re drinking enough water for your body to function optimally. Doing so can have an indirect effect on your skin because it helps flush out toxins and waste from your body and assists in circulation and getting oxygen and nutrients to your skin cells. It’s just not necessary to drink excess amounts of H2O in the pursuit of clearer skin.

As for the “right” amount of water to drink every day, the answer is a bit more complicated than the oft quoted recommendation of eight glasses, as there are many other factors to consider like your age, weight, level of physical activity, the climate you live in and how much water you’re getting from the rest of your diet.

So rather than focusing on a magic number or amount, you should drink water whenever you’re thirsty, drink more water when you sweat more, and include lots of water-rich foods like fruits and vegetables in your diet overall.

Need more incentive to top off your cup? Here are some of the ways staying hydrated helps you stay healthy, which is something we definitely don’t take for granted in 2020.

1. It Improves Your Metabolism

According to a study in the Journal of Clinical Endocrinology and Metabolism, drinking approximately 20 ounces of water on an empty stomach can increase your metabolic rate by 30 percent. Start your morning off with a full glass to help put your body on a path toward more efficient digestion for the rest of your day.

2. It Helps Get Rid Of Toxins

Toxins are loosely defined here as anything leftover that isn’t used or needed by your body. These substances are best removed though sweat, urine and stool—all of which requires adequate fluids to happen. Water keeps your small intestine hydrated and your kidneys happy, which helps to keep things moving.

3. It Keeps You Regular

On that note, water is necessary to keeps things flowing through your gastrointestinal tract to prevent constipation. When there is not enough water available, stool becomes dry and more difficult to move through the colon, resulting in the dreaded constipation.

Is Your Skin Dry or Just Dehydrated? Here's How to Tell

beauty
by Greta Heggeness
We Compared This $8 Dupe with the Viral Color-Changing Blush
beauty
by Olivia Dubyak
Augustinus Bader for 25% Off? Yes, Please—and It's Exclusive for PureWow Readers Only
beauty
by Chelsea Candelario
Kate Middleton Swaps Her Signature Waves for Sleek, Straight Locks
beauty
by Olivia Dubyak
This Sunday Riley Sale Will Save You 25 Percent On Good Genes (& It's Just for PureWow Readers)
beauty
by Jenny Jin
The One Ingredient a Beauty Editor Wants You to Nix from Your Winter Skincare Routine
beauty
by Karelle Mckay
We Tried the Viral Paraffin Wax Foot Warmer—Here’s Our Honest Review