What Is Reprowashing? Everything You Need to Know About Post-Roe Performative Activism 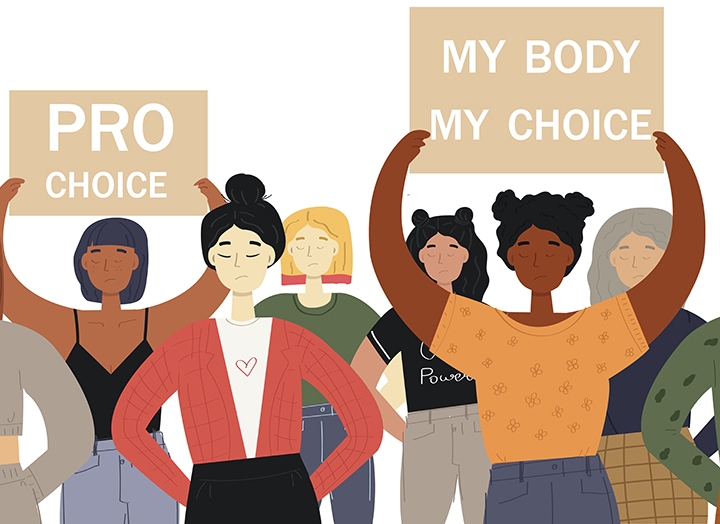 When the Supreme Court overturned Roe v. Wade in June, declaring that abortion healthcare is no longer a Constitutional right, we saw countless companies speaking out against the decision. There were infographics about the stats that 61 percent of Americans believe abortion should be legal in all or most cases and illustrations declaring “Abortion is healthcare.” But some of that support was superficial, with a number of those companies simply paying lip service to the cause—and in fact supporting anti-abortion legislators behind closed doors. It’s a practice called reprowashing.

The term was coined by UltraViolet, a community of 1.2 million women and allies fighting for a more inclusive world, that defines reprowashing as, “Performative actions by a company that are intended to suggest they support abortion care and the right to bodily autonomy, while at the same time, the company diminishes the health, safety, and rights of their employees and customers by funding anti-abortion politicians.”

What it all boils down to is performative activism, or supporting a cause or issue to garner attention, support or monetization from others rather than actually caring about making a difference in the cause. Companies know that consumers care about issues like anti-racism,  gun control and access to abortion, but they’re counting on a rushed statement or cutesy Instagram post to be enough to appease their customers. Now more than ever, though, individuals and organizations like UltraViolet are rightfully calling the hypocrisy out.

It’s similar to rainbow-washing, or companies supporting LGBTQIA+ rights during Pride Month while actually donating to anti-LGBTQIA+ legislators and organizationns. Popular Information, an independent newsletter dedicated to accountability journalism, looked at 25 corporations (including Comcast, AT&T and Walmart) that have changed their public avatars to include the Pride flag and found that those 25 corporations had collectively given more than $10 million in the previous two years to politicians who were involved in crafting or voting for legislation that would hurt the LGBTQ+ community.

In terms of reprowashing, take Disney. After Roe was overturned, Disney announced that it would be extending its “family planning” benefit to any Disney employee needing to travel for abortion care. After digging deeper, however, UltraViolet found that, prior to announcing that it would temporarily pause its political giving to Florida lawmakers, Disney was the third-largest contributor to supporters of the state’s 15-week abortion ban. Beyond that, per UltraViolet’s analysis, 69 percent of Disney’s political donations in Florida went to anti-abortion lawmakers, totaling $166,100 in contributions since 2020.

Also called out for reprowashing was Match Group, the company behind the dating apps Tinder and Hinge. Last month, Match Group confirmed to Axios that it would suspend donations to state attorneys general (of either party) after being called out for giving money to anti-abortion politicians while at the same time publicly supporting reproductive rights.

So, how can you ensure the companies you’re supporting financially align with your morals? While you can find data on how major corporations are spending their money (via sites like UltraViolet’s ReproReceipts), it’s harder to know if smaller brands are putting their money where their mouths are. In those cases, look for brands who are vocal about their support—financial and otherwise—for the issues that are important to you. For example, Social Goods donates $5 from each order of its 1973 T-shirt (representing the year Roe v. Wade was passed) to the National Institute for Reproductive Health, while sustainable fashion brand Chnge has donated more than $500,000 to organizations like Planned Parenthood and the NAACP.

It takes a little more work on the consumer’s end, but supporting companies who actually support causes you care about—versus those who just pretend to—feels good (even if there isn’t actual ethical consumption under capitalism).

Adoption Will Never Be the “Solution” to Abortion Bans. Take It from Me, an Adoptive Mother