Is It OK to Take Ibuprofen on an Empty Stomach? (Like When You Have No Time to Eat and Your Head Is Pounding) 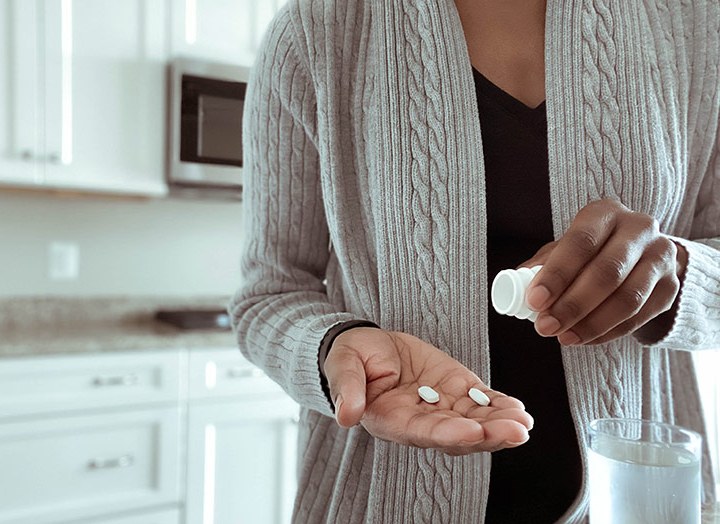 Whether you have a nagging headache, horrible period cramps or your legs are sore from yesterday’s run, you reach for an ibuprofen. You grab a big glass of water and gulp down the recommended dose and before you know it, you’re feeling like a new person. But wait…should you have swallowed those pills on an empty stomach? Let’s find out.

First, what is Ibuprofen?

Ibuprofen is in a class of medications called non-steroidal anti-inflammatory drugs, or NSAIDs. Commonly sold in the United States under the brand name Advil, it works by stopping the body's production of a substance that causes pain, fever and inflammation. It’s used to reduce fever and relieve pain or inflammation caused by a whole host of conditions like headaches, toothaches, arthritis, menstrual cramps and more. Though there are some exceptions, ibuprofen is can be taken by adults and children starting at six months old.

What’s the difference between ibuprofen and acetaminophen?

While ibuprofen and acetaminophen (commonly sold as Tylenol) are both effective at relieving pain and fever, ibuprofen is also effective at relieving inflammation. Because ibuprofen is an NSAID, it’s not suitable for everyone, and can cause adverse gastrointestinal, renal and cardiovascular effects. As with any type of medication, check with your doctor to make sure you’re treating your aches and pains safely.

Is it OK to take it on an empty stomach?

This one is kind of two-fold. If you’ve experienced an upset stomach when taking medications in the past, the FDA recommends taking ibuprofen with food or a glass of milk to reduce the chance you’ll feel queasy. Longer-term, there is the possibility that NSAIDs can damage the lining of the stomach, which is why it’s long been believed that food can help cushion the stomach from these effects, though evidence of this has been largely anecdotal. Issues may arise if you’re taking ibuprofen for an extended period of time, since it can affect levels of prostaglandin, a lipid that aids in stomach protection. When ibuprofen is taken in large doses or for a long time, less prostaglandin is produced, which can increase stomach acid and irritate the stomach lining, causing problems.

Per a 2009 study at Sheffield Hallam University, “Ibuprofen at OTC doses has low possibilities of serious GI events, and little prospect of developing renal and associated [cardiovascular] events. Ibuprofen OTC does not represent a risk for developing liver injury especially the irreversible liver damage observed with paracetamol and the occasional liver reactions from aspirin.”

If you’re taking ibuprofen for temporary pain relief and have no risk factors, you may be able to take it on an empty stomach. In fact, this 2012 study published in the Journal of Pharmacy and Pharmacology found that, “The rapid onset of action of NSAIDs is most important during over-the-counter use, in which case it may be more appropriate to take the drugs on a fasting stomach.” Basically, for short-term use, taking ibuprofen on an empty stomach could make you feel better faster. But again, your doctor knows what’s best for you based on your medical history, so always double check with them before determining a course of treatment.

Wait, Should I Take OTC Meds for Post-Workout Muscle Pain?

The Common Cold Versus COVID: A Doctor Explains How to Tell the Difference