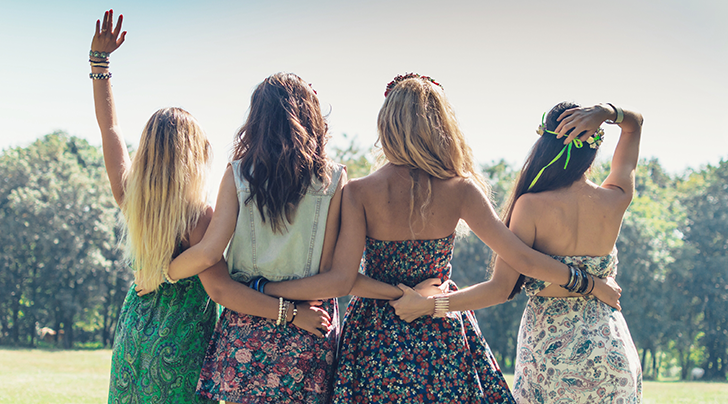 What do Bad Blood-era Taylor Swift, The Real Housewives (of any city) and the synchronized sorority sisters of the University of Texas at Austin’s Alpha Delta Pi have in common? They all belong to a squad, a crew, a posse, a tribe. They roll deep. And as I approach 40, I think I’m finally ready to admit that I don’t, to embrace the possibility that I never will and to own that as a choice.

Before we start brainstorming centerpieces for my pity party, I wish to clarify: I have friends (I swear). Cherished, lifelong ones. More recent bonds forged in the trenches of preschool drop-off, fired by the kiln of toddlers with separation anxiety. New yet promising one-sided girl crushes, and cross-country connections that date back decades to my days as a magazine assistant, when no dream was too lofty, no tube top too tight. Some of these relationships are sustained by nothing more than biannual text banter that makes me laugh at my phone while standing alone in line at Stop & Shop.

I adore these individuals, but I continue to seek community. Even recently, I’ve had lightning-in-a-bottle moments when I’ve suddenly found myself simpatico with an entire dinner table full of women (usually we’re all yelling about breastfeeding; it’s glorious). I’m so grateful when that happens. Still, it’s the exception, not the rule.

The reality is, my friends barely know each other. On the rare occasion that they cross-pollinate (say, at my wedding or my kid’s birthday party), I find myself awkwardly overcompensating for their stranger-hood. I overdo it on the introductions, trying too hard to fit together the independent puzzle pieces of my fragmented social life, flailing like George Costanza as my worlds collide. Pop culture only magnifies this insecurity. From Sex and the City to Girls to Bad Moms to Girls Trip to Bridesmaids to those relentless traveling pants, my lack of a sisterhood is reflected back at me as a loss—an indication that I must somehow be lacking. I have #squadgoals but no squad. I am always the guest but rarely the bridesmaid. I get sweaty thinking about who I’d invite to a hypothetical Friendsgiving. And how am I even supposed to feel about Jennifer Aniston’s annual trip to Cabo?

According to social scientist Vanessa Van Edwards, in this at least I am not alone: “We get hundreds of emails to our human behavior research lab [answering] this question: What is your biggest people struggle? At least a third of these answers have to do with the myth of adult friendship — not only how hard it is to make friends, but also how unnerving it is to not have what we think we are supposed to have. It’s a version of this: If I don’t have that perfect Friends group, I am not good enough or my adulthood is not complete. Here’s the thing: If you are lucky enough to have a group of friends like Chandler, Joey, Ross, Rachel, Monica and Phoebe, you are in the rare minority and you should treasure them with your life. But if you don’t, you are not abnormal. You are not lacking. You are not weird. And you don’t have something missing.”

It’s also possible that the clique I’m convinced I pine for eludes me by design. The fact is, I’ve always been more comfortable, more attuned, more “seen” one-on-one. As Mindy Kaling writes in Is Everyone Hanging Out Without Me?: “One friend with whom you have a lot in common is better than three with whom you struggle to find things to talk about.” More friends do not always make us merrier. More friends are exhausting. Research shows social bonding is “Cognitively…extraordinarily taxing, and as such, intimate conversations seem to be capped at about four people before they break down and form smaller conversational groups.” My comfort zone is as the Thelma to a select few Louises (ideally with a happier ending), the Romy to a Michele, the Gayle to someone’s Oprah. (But seriously though, I get to be Oprah.)

This is self-acceptance backed by science. Socializing—for everyone—simply declines as we age. According to a study co-authored by psychologists from the University of Oxford, “Men and women were found to be socially promiscuous—making more and more friends and social contacts—until the age of 25, after which point they started losing them rapidly, with women losing them at an initially faster rate than men.” Experts attribute this to “the grandmother effect,” i.e., when we become more invested in a smaller number of key relationships with relatives or close pals, who will, at least theoretically, help us raise our kids.

Telling my mom she’s my “ride or die” doesn’t fit neatly into my fantasy of adulthood. But it doesn’t make it any less true. In fact, it was she who told me, back in high school, when I was heartsick over an obsessively close friendship that fell apart: “All you really need in life are five good friends.” She held up her hand then curled all five individual fingers into a fist. “Then you can be strong.”