Our Favorite NYC Workouts, Ever

You’d think that having a million fitness studios in this city would mean ever-changing workouts (and, you know, strong abs, but we digress). In actuality, it can feel pretty overwhelming…which leads to our going to the same place over and over. (Chipotle. Ha. We kid.) So we decided to poll the office on the workouts they love—and everyone from serious fitness buffs to wary gym goers chimed in. 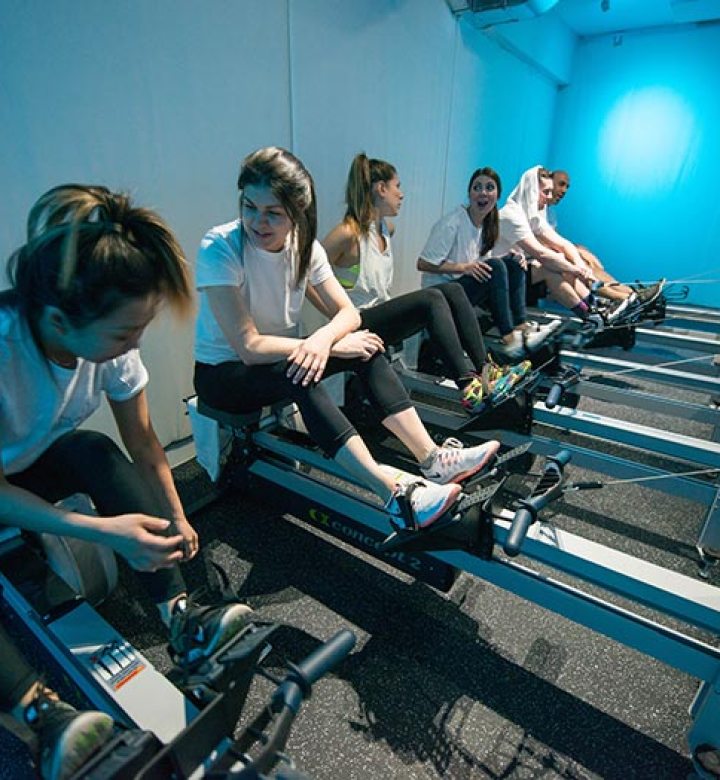 Warning: Current’s classes are not for the faint of heart. One coworker says, “My abs hurt for days afterward.” It’s especially good for experienced rowers who are looking for a challenge. The twist? Each class is only 30 minutes, so no matter how much your muscles are crying, you can power through.

If you’re new to rowing, Row House will help you get up to speed with the full-body, low-impact workout. The instructor guides you through circuits of varying intensity, interspersed (depending on the class) with off-the-rower strength-training moves. 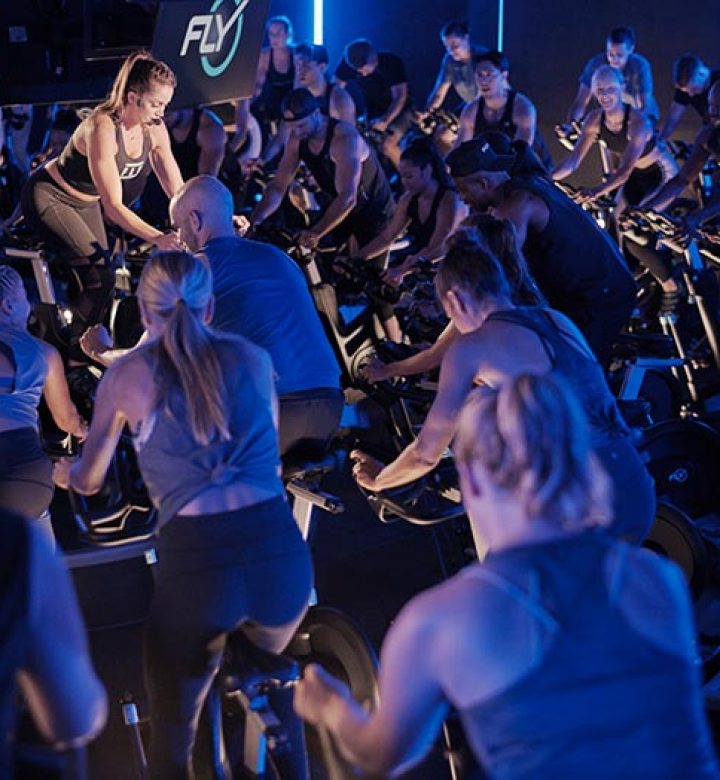 There’s a reason Flywheel is one of the most beloved cycling studios around: Its classes are some of the most motivating, challenging and exhausting (in a good way) classes we’ve ever taken. Even if you opt out of broadcasting your class rank on the big screen, it’s addicting to track your own personal bests in the app. As one staffer puts it, “It’s my therapy, it’s my church, it’s what I look forward to every Thursday night!”

Cycling seems to inspire fanatical devotion in its followers, but it can be intimidating for the uninitiated. The super-friendly instructors at Crank NYC (locations on the Upper East Side and in Long Island City) make for one of the most welcoming environments we’ve ever encountered and a solid workout to boot.

If you have trouble getting past the whole hamster-on-a-wheel feeling, The Monster Cycle (Soho, Chelsea) keeps you entertained by screening music videos at the front of the room. (Trust us, you just feel stronger watching Beyoncé strut on-screen.)

More than one coworker raved about Cyc, which sets itself apart with high-energy playlists and an extra dose of upper-body sculpting: “The music keeps it fun—and distracts you from the insane amount of sweat pouring off your body.”

So maybe you’re competitive but more of a team sports person than a solo striver. At Swerve, classes are divided into teams, which boosts the rivalry factor without singling anyone out. 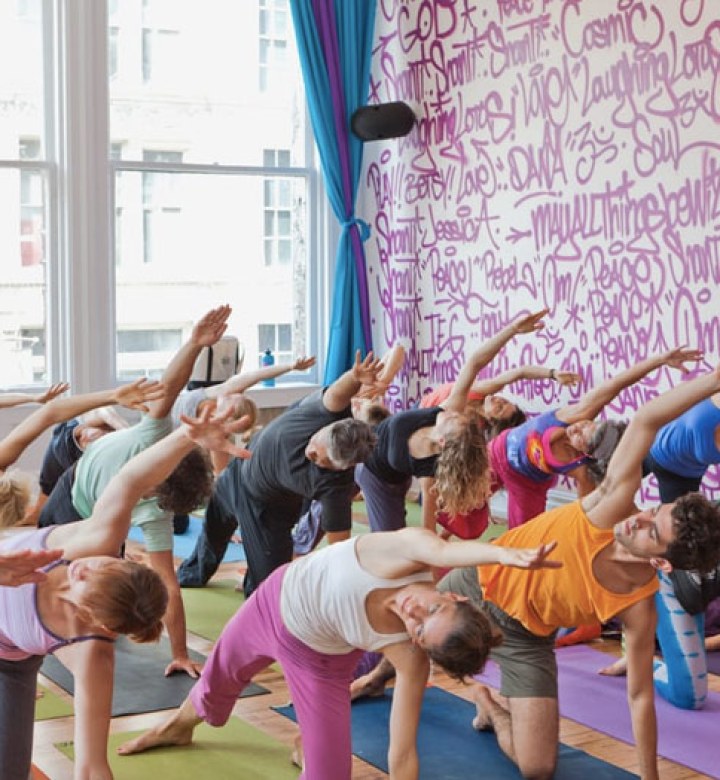 Yoga studios might be minimalist or serene, but “fun” isn’t usually a descriptor you hear thrown around. Not the case at Laughing Lotus, whose locations (Flatiron, Williamsburg) are outfitted with splashy, colorful murals and instructors with the energy to match.

If it is serenity you’re after, Reflections Yoga (Gramercy) gets points for small class sizes and tailored instruction for all levels. One editor swears by its Sweaty Stretch class: “I have back and neck problems, and this class has helped me in ways no doctor ever could.”

By far, the yoga that got the most raves was the heated, hip-hop-fueled class at Y7 Studio (locations throughout the city). As one staffer put it, “I hated hot yoga until Y7. I’m still in denial about it being hot yoga…but I love it.”

We have some serious fitness fiends in our midst, and they swear by the workout at Tone House (NoMad, Upper East Side), which they say “makes you feel like a legit athlete.” We have always wondered what it would be like to be Serena Williams…

Everyone knows Equinox has some of the best classes in town. Not everyone knows that you don’t have to spring for a membership to get access to them: Project by Equinox, the gym’s studio spinoff (Nolita) is where instructors try out new class concepts like Babes & Bands and the Sculpt Society. 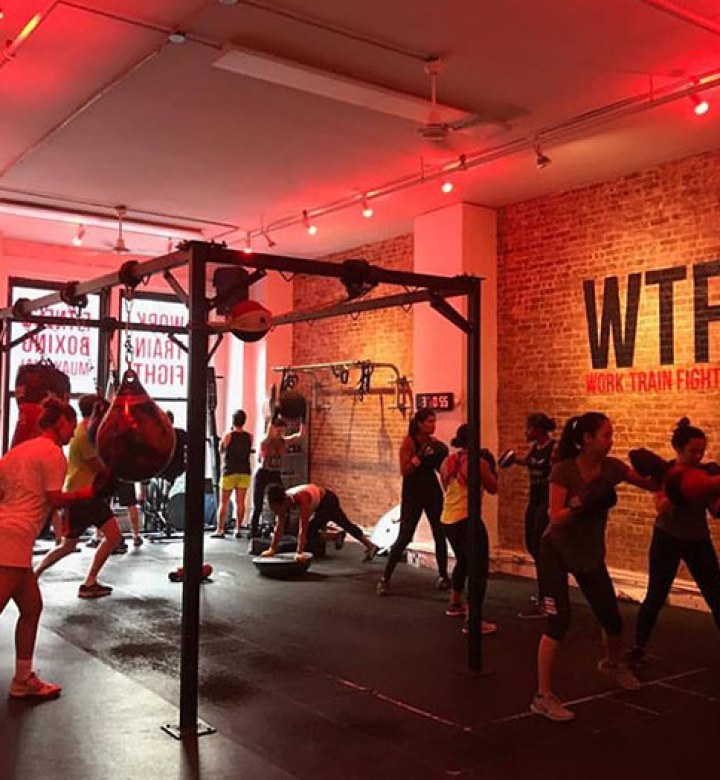 If you haven’t strapped on a pair of gloves yet, what are you waiting for? Newbies are welcome at Work Train Fight (Noho), where you can borrow gloves for free and learn to throw punches with the best of ’em.

Celebs love Rumble, and so do we. The class splits into two halves—a boxing circuit and a strength circuit—and you’ll alternate, which means you never have a chance to get bored and/or realize how tired you are. Plus the teardrop-shaped, water-filled bags offer a totally different kind of workout than your standard punching bag (not to mention they’re totally Instagrammable).

Church Street Boxing Gym (Tribeca) is the old-school neighborhood gym of our dreams. Classes are intense (expect lots of conditioning as well as bag work), and there’s a good chance you’ll be working out alongside a professional fighter or two.

While not strictly a boxing gym, Aerospace is a great spot to practice your hooks and uppercuts or get your heart rate way up via body-weight strength training and next-level jump rope.

First get your rage out, then find your Zen at Box + Flow, which combines 35 minutes of boxing with a rebalancing yoga flow (in other words, the perfect combo for New Yorkers). Bonus: Classes are barefoot, so no schlepping your Nikes around all day.

Wish your workout felt less like exercise and more like a rave? Then head to 305 Fitness, which now has four Manhattan locations. As one coworker puts it: “I love the classes so much because they combine the beat of dancing at a club with the cardio of the gym, and then they throw in some core work and strobe lights.” Um, sold.

A newcomer on the dance-party-as-workout scene, Forward_Space boasts a dark studio floor lit with black lights (because duh). Classes are “super upbeat and fun,” whether you opt for an all-levels cardio class, one with light weights or a more in-depth choreography sesh.

Jogging in the city seems like a good idea until you realize that dodging tourists and trash piles isn’t the workout you had in mind. Which is probably why so many people love Mile High Run Club’s challenging (but customizable to your level) treadmill classes (Noho, NoMad).

For the rhythmically challenged among us, dance cardio sounds like a special form of torture. But the “shame-free” attitude at Broadway Bodies (Chelsea) might be enough to convert us—especially since it means we get to learn choreography based on everything from Rihanna to Hamilton.

Not only does New York Pilates have some of the most gorgeous studios we’ve ever seen, but the reformer-based classes are some of the most challenging workouts we’ve ever done. Fortunately, the instructors are super attentive and the music is always on point, so it’s definitely not as scary as it could be.

Small class sizes, knowledgeable instructors and classes (centered around the reformer, mat or springboard) that leave you feeling muscles you never knew you had: East River Pilates is exactly the kind of welcoming studio you want in your neighborhood. (Right now, that means three locations in Williamsburg.)

4 Killer Pilates Moves You Can (and Should) Do at Home

wellness
by Sarah Stiefvater
Movement Snacks Are the Easiest Way to Exercise When It Feels Like You Have Zero Time
wellness
by Ariel Scotti
21 Online Dating Tips from an Expert (& Women Who Met Their Spouses on ‘The Apps’)
wellness
by Rachel Bowie
Valentine’s Day Is the Epitome of Cringe, but Here’s Why I’m Doubling Down
wellness
by Jaime Wright
Your Monthly Horoscopes: February 2023
wellness
by Destinee Scott
Here's Why the Lora DiCarlo Carezza Stimulator Is My Valentine This Year
wellness
by Stephanie Meraz
20 Long-Distance Date Ideas to Feel Closer Than Ever to Your SO