You’re proud of yourself, orally speaking: You brush with a whitening toothpaste twice a day (sometimes after lunch, too!). You floss often. You gargle and avoid sweets and don’t overindulge in coffee or red wine or any other tooth-staining evils. And yet you may be missing your chance for the healthiest mouth—and freshest-smelling breath—all because you don’t use a tongue scraper.

What Exactly is a Tongue Scraper?

Usually in the form of a bent metal band forming a U-shape, tongue scrapers are tools used to do exactly what you might expect—scrape gunk off your tongue. Ayurvedic medicine is big on tongue scraping for overall health and well-being, since the traditional Eastern medical practice teaches that the tongue is a road map for the whole body, and that each section of the tongue corresponds with a major organ (for example, the back of the tongue is linked to the colon, so a vigorous scraping back there encourages, um, let’s just call it a colon movement). In short, it's just another super useful tool that'll take your oral care routine to the next level. Here is our pick of devices, including reviews from users.

The Best Natural Toothpaste, According to Dentists

Winners at a Glance 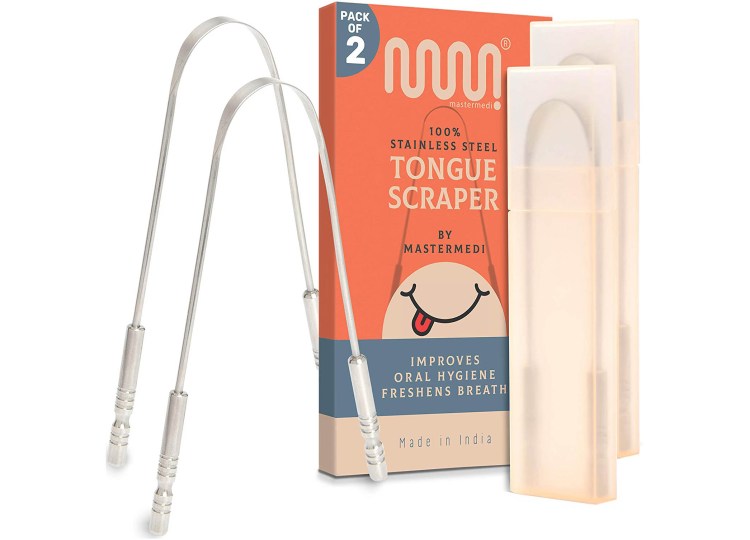 There's a reason why this tongue scraper is the best of the best. It basically checks all the right boxes (including being a great option for kids). It's made of medical-grade stainless steel (aka it won't rust), it's non-toxic, sterilizable, has a comfy grip and a heavy-duty gauge that allows for smooth tongue scraping. Oh, and it also comes with its own sleek travel/storage box for safekeeping (um, score). 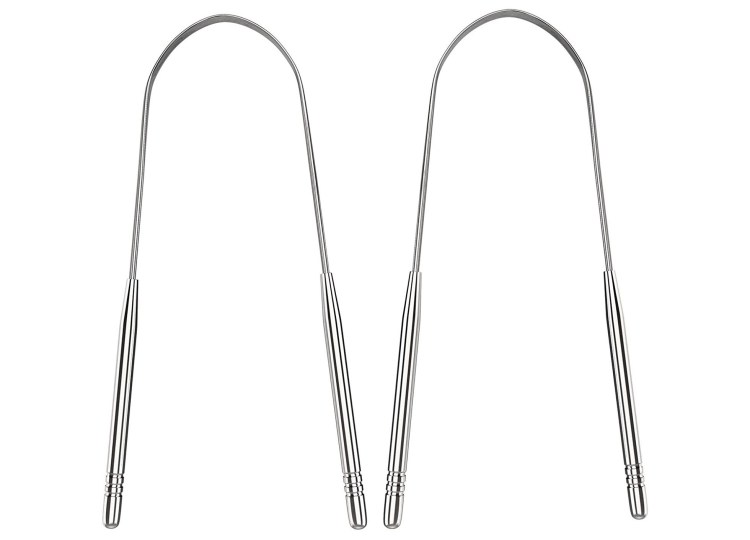 This model has a wide comfortable grip and a heavy-duty gauge to ensure smoothness on the tongue without any nicks. There are no synthetic coverings, making it free of any toxic materials. Not to mention it's super flexible, so you'll get an effortless, thorough cleaning. 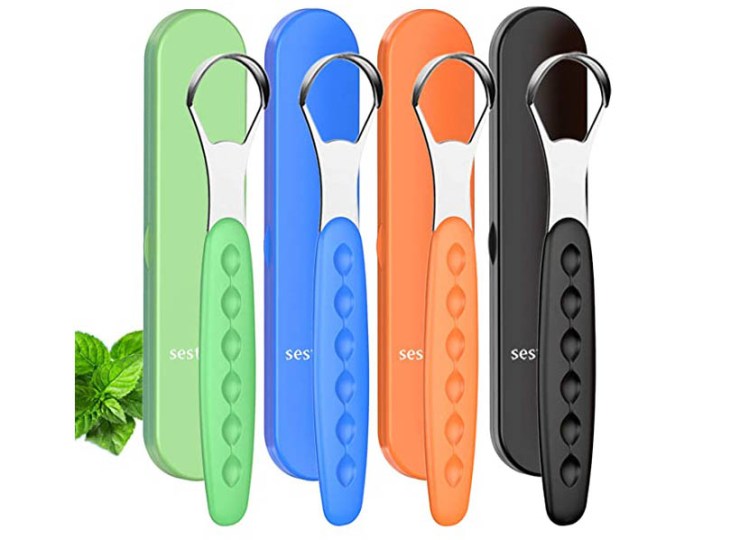 This happy little set of four scrapers, each with its own case, is made with odorless stainless-steel heads attached to plastic handles. “My kids used them and were amazed by what it was taking off their tongues after their ‘thorough’ brushing,” one parent says. “The colors are vibrant and glad I got four different colors so no one confuses their own with another! Highly recommended!” The shape of the scraper portion is small enough to fit inside children’s mouths, and is two-sided, with a softer “A side” that’s recommended for more sensitive tongues. 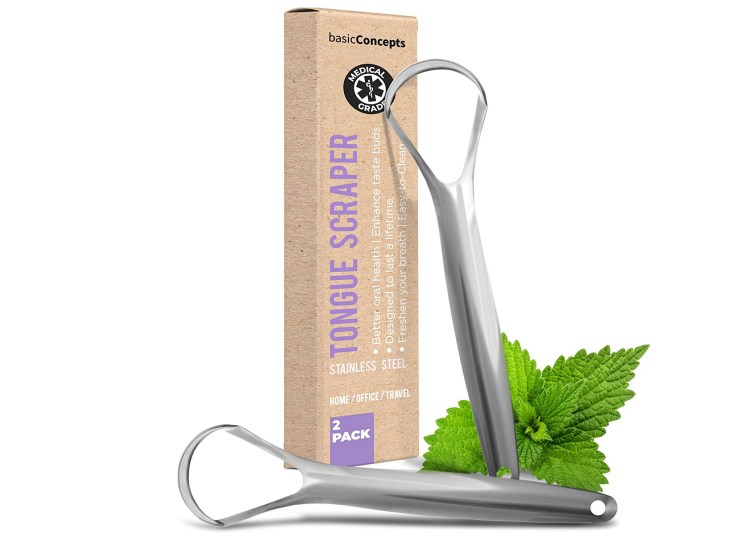 The space-age curves of this scraper are super attractive, but the thing we love most about it is that it's made of high-quality stainless steel that's free of toxic materials like BPA and sulfate, so it's super easy to sterilize (like literally, all you need is isopropyl alcohol) and it lasts a long time. 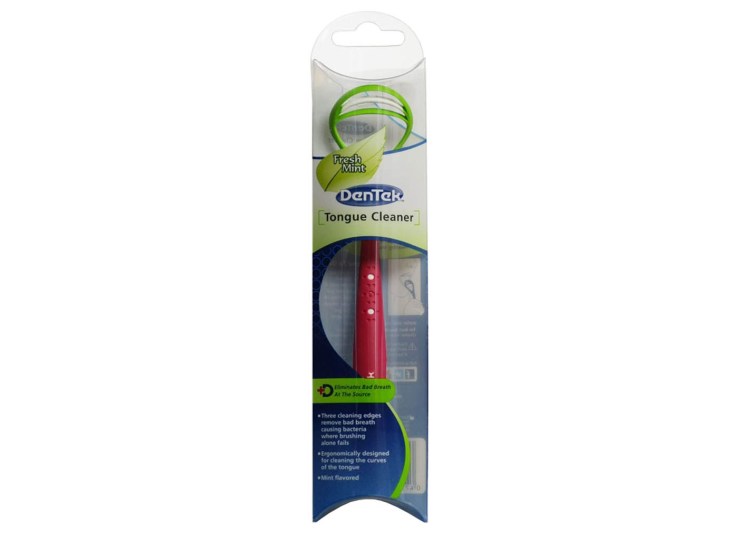 This one gets high marks from a professional: “I'm a dental hygienist and love this tongue scraper. Ordered one for my husband who has chronic halitosis (bad breath) from postnasal drip. I can tell from the smell of his breath if he forgot to use the tongue scraper or not. Worked better than mouth wash!” The triangle-shaped soft head conforms to the shape of the tongue as you’re swiping, which tender-mouthed users appreciate. 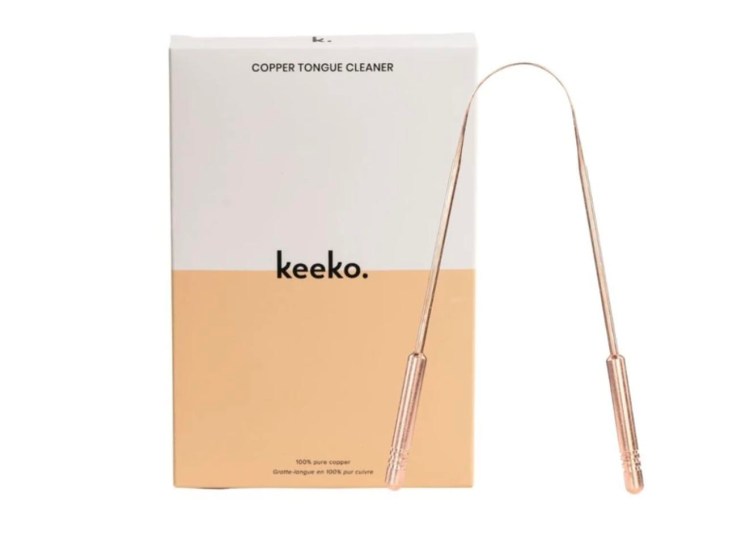 “Strangely satisfying” is the review one user gives this all-copper scraper that’s been deemed “beautiful and utilitarian” by another happy customer. Keeko suggest using it daily, then replacing after three months the same way you would with a toothbrush, to avoid bacterial buildup. 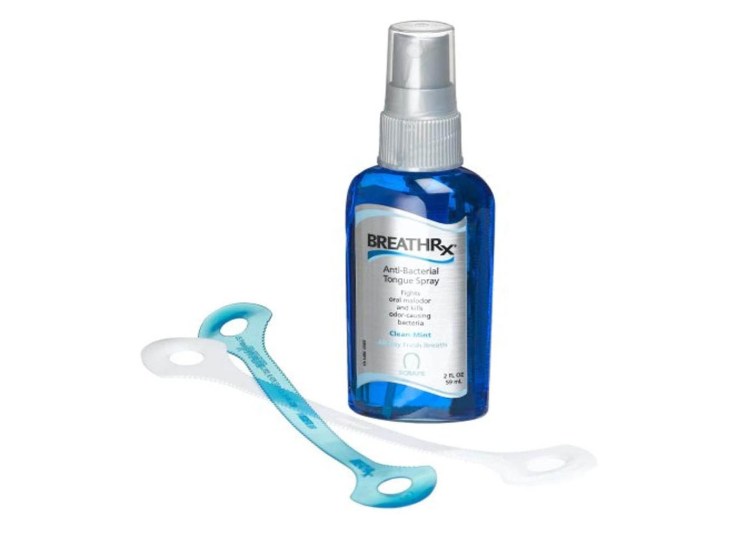 This is the combo platter of bad breath remediation: First you spritz the clinically proven, tingly spray on your tongue, then you scrape with the flexible, serrated scraper. “Feels like the CDC set off a mint neutron bomb in your mouth,” writes one customer. “Works well after a long day of a garlic, cheese, dairy, coffee, and kimchi with little to no hydration.” 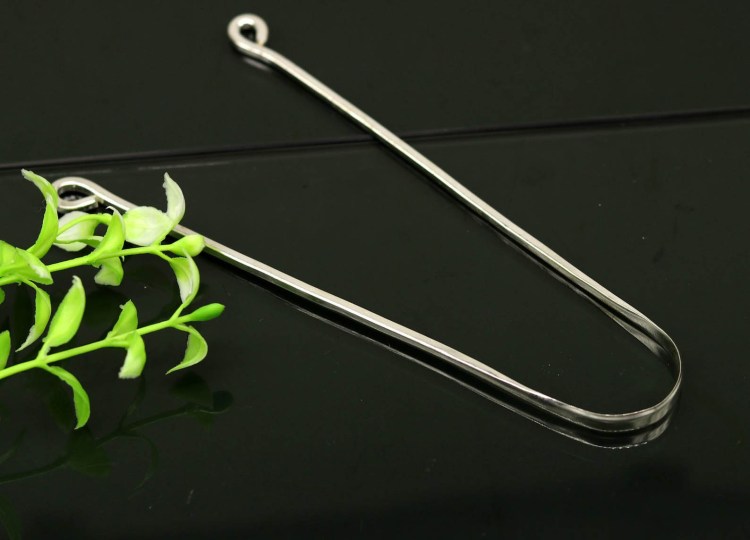 Ayurveda adherents revere pure metals for their anti-bacterial properties and while copper is the most common of these scrapers, silver is also popular (although its high price makes it prohibitive). This artisanal scraper is a boon for persons with sensitivity to the stainless steel, copper or plastic of other models. “The tongue cleaner is medium-light weight and is VERY smooth on the tongue,” says one user. “Love it.” 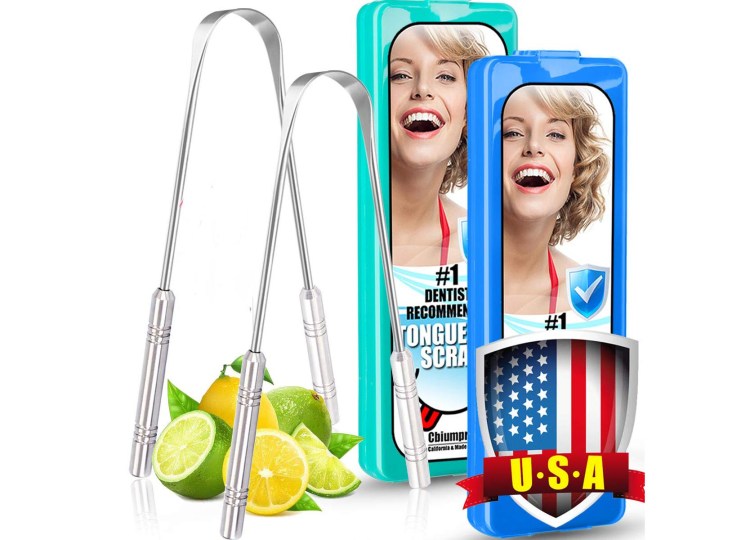 This scraper has an extra-wide head that covers the entire tongue easily and is built of superior quality material that is corrosion resistant and long-lasting. In other words, it was designed for regular scraping, plus they come with carrying boxes that make them great for travel. 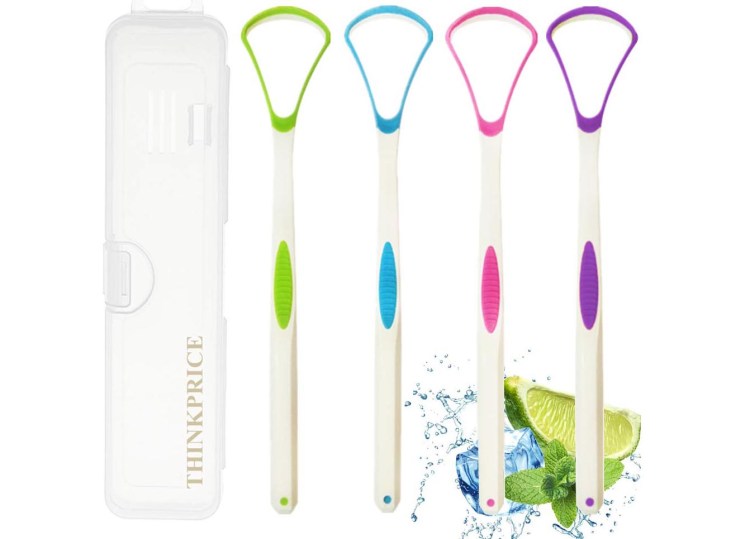 These flexible plastic scrapers come with a handy case and work well without using any BPA. It removes that stubborn icky gunk and debris, helping to improve the overall appearance of your tongue. It also comes in a set of four, so it's great for families. 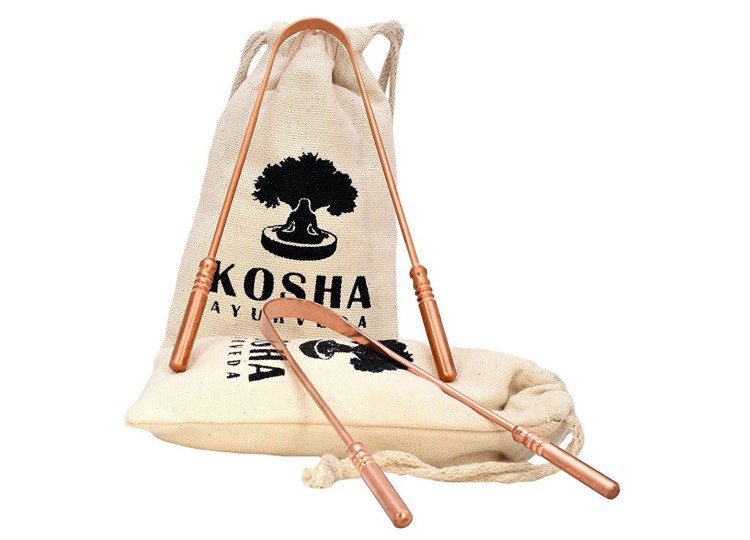 While a sharp metal device around your tongue might seem to risk slicing it, this has blunted edges to ward off any nicks or cuts. “I like the quality of these tongue scrapers. I love what they feel like and I love that it is copper. Copper has been shown to kill bacteria and virus,” says one reviewer.

Why Do You Need to Clean Your Tongue, Anyway?

According to Ayurveda, the body excretes toxins that show up on our tongues, which should be scraped away for optimal health. While that’s not a tenet of classical Western healthcare, there have been medical studies which have suggested that scraping the coating from your tongue reduces bad breath, since you’re getting rid of the volatile sulphur compounds (VSC) that cause bad breath. One scientific estimate states that 85 percent of halitosis cases originate in the mouth, and that 50 percent of those are caused by tongue residue.

How Often Do I Need to Use a Scraper? And How?

While scientists agree that bacterial load is reduced by tongue scraping, the consensus is that this practice has to be done regularly in order to reap the benefits. In a 2008 study, the amount of tongue crud (admittedly, not the term used in the scientific abstract, but you get what we’re talking about here) was significantly reduced in subjects who scraped their tongues and brushed their teeth every night, as opposed to those who just brushed their teeth. And while there’s no conclusive hard data on exactly how often you should be scraping, once daily is a reasonable place to begin.

As for how you do it, it’s the simple act of sticking out your tongue—ideally in front of a mirror—and placing one of the flat edges of the device down, then pulling forward. A half-dozen swipes forward, wiping your scraper clean on a tissue each time, and you’re done. Next, brush, floss and rinse with mouthwash.

A Word About the Gag Reflex

While the act of sticking an oral hygiene tool deep into your mouth may make you choke a bit, there’s a way to train yourself to override the gag reflex. Start with your scraper mid-tongue and scrape it only halfway for a couple of swipes, then with each additional swipe move it a bit farther back. And, since you’re probably standing over the sink, if you are a bit spit-uppy, there’s no harm.

"So, Now That I'm Vaccinated, Can I Start Sleeping Around Again?"