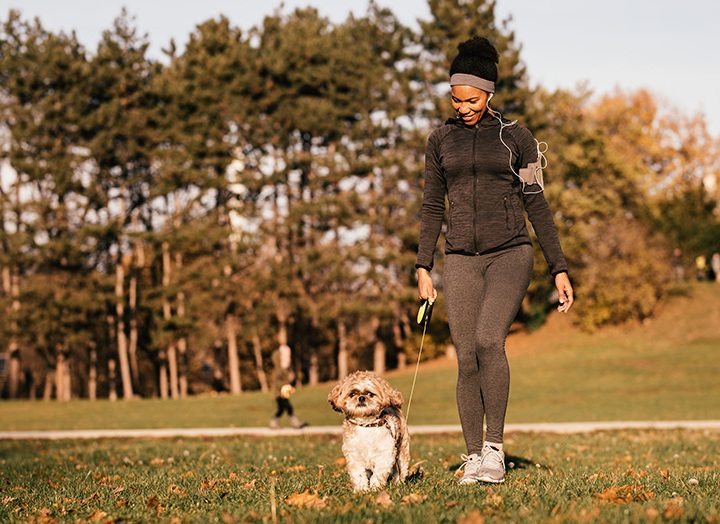 The idea that we should all be clocking 10,000 steps a day is ingrained in most peoples’ minds, just like the notion of getting eight hours of sleep each night or accepting that breakfast is the most important meal of the day. But is that exact number of steps absolutely necessary? What if you can only get in 5,000 steps a day? Does that count for anything? The good news is that yes, any amount of steps are totally worth it.

What Are the Benefits of Walking?

1. It Could Help You Lose Weight

Walking burns calories, and while the number of calories you burn depends on a number of factors—your speed, your distance, your weight, etc.—if you’re looking to shed some pounds, going for a walk is a great place to start. In a small study at Sungkyunkwan University in Korea, obese women who walked for 50 to 70 minutes three times per week for 12 weeks, on average, reduced their waist circumference by 1.1 inches and lost 1.5 percent of their body fat.

2. It Could Make You Happier

On top of helping you feel better physically, this form of exercise can also help you feel better emotionally. Studies, like this one from the University of Nebraska, have shown that taking a regular stroll can help reduce anxiety, depression, and a negative mood. It can also boost self-esteem and reduce symptoms of social withdrawal.

3. It Could Reduce the Appearance of Varicose Veins

Walking regularly has been proven to help reduce the appearance and pain of varicose veins, according to the Cleveland Clinic. (Just make sure you change into sneaks before you start, to prevent injury and increase circulation.)

4. It Could Help You Maintain Muscle as You Age

According to a study at Purdue University, walking can reduce age-related muscle loss, helping you retain more of your muscle strength and function.

5. It Could Aid in Digestion

After eating a heavy meal, don’t flop down on the couch in front of the TV. Circling the block for 30-minutes will help get things moving in your digestive tract and keep your blood sugar levels more stable, notes The New York Times.

Do You Really Need to Walk 10,000 Steps a Day to Reap All Those Benefits?

The short answer is, no. According to Dr. I-Min Lee, a professor of epidemiology at the Harvard University T. H. Chan School of Public Health, the 10,000-step goal isn’t based in science—it was a marketing strategy. According to Dr. Lee, "The number likely originated as a marketing tool. In 1965, a Japanese business, the Yamasa Clock and Instrument Company, sold a pedometer called Manpo-kei, which means '10,000 steps meter' in Japanese." She says the company may have chosen that number because the number 10,000, written in Japanese, looks like a person walking.

Concluding that 10,000 steps was too arbitrary a number, Dr. Chan and a team of researchers set out to find out if there was an exact figure to aim for. Their research was published last spring in the Journal of the American Medical Association and concluded that while there’s no harm in getting 10,000 steps a day, you don’t need to hit that number to reap the health benefits. In fact, researchers found that in older women, taking as few as 4,400 steps per day was associated with a 41 percent lower risk of dying during the study period when compared with women who walked 2,500 steps a day or fewer. In addition, it didn't seem to matter if the women were power walking or just moving around the house.

That’s not to say you shouldn’t be hitting 10,000 steps if your fitness level or schedule allow. Dr. Lee says, "I'm not discounting 10,000 steps a day…For those who can get to 10,000 steps per day, that's fantastic." Still, it’s not as necessary as previously thought to achieve optimal health.

Easy Ways to Get More Steps in Every Day

This won’t really work on a rainy or snowy day, but if you have to park your car, don’t choose the spot closest to the entrance. Those extra steps add up over time.

2. Build Time into Your Schedule

It’s easy to get sucked into work and forget to get up and move. To avoid sitting during your entire workday, set a few alarms to remind you to get up and stroll around—even if you just do a few laps of your house.

Don’t expect to go from 1,000 daily steps to 10,000 steps overnight. Setting too lofty a goal will make it that much easier for you to give up. Instead, work your way up to a number of steps with daily or weekly increases that you feel comfortable with.

Whether you create a power walking playlist full of bangers, download the latest episode of your favorite podcast (here are a few suggestions, whether you're into food, books or true crime) or call a friend to chat while you walk, the point it to make getting in those steps—which, admittedly, can get a little boring—more fun and interesting. The more enjoyable you know your walk can be, the more likely you’re going to go.