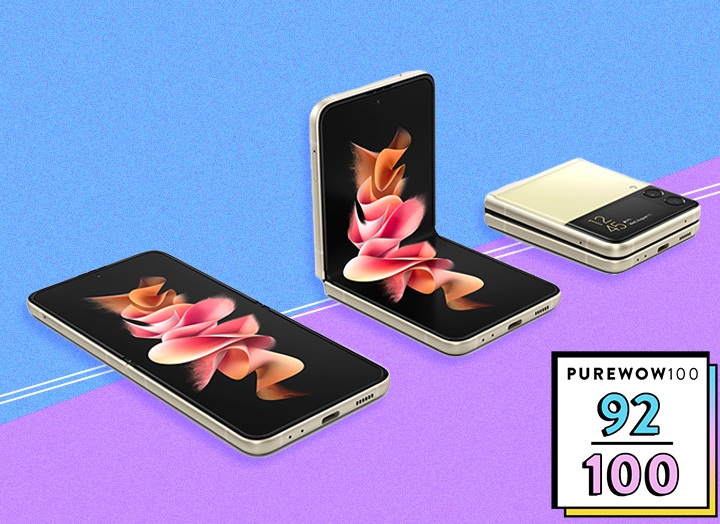 I’m going to state up top that I don’t usually write about cell phones—nor am I a tech expert.

That said, I wrote this review for people like me, which are people who use their phones for two primary functions: to communicate and to create. And by that, I mean text friends and snap a questionable number of photos of every life event (and non-event) as it happens.

I’m also a deeply nostalgic millennial who remembers life before the Internet and the joy you’d feel from renting a movie at your local Blockbuster on a Friday night—or, conversely, the annoyance you’d experience whenever a song skipped because of a scratched CD.

If you’re still with me here, you will see why I was drawn to Samsung’s Galaxy Z Flip phone.

I’ve been an iPhone user since 2011 and have become overly accustomed to (fine, totally reliant on) their interface. Both my parents and my brother have Samsung phones and whenever one of them (usually my mom) asks me to download an app or do any simple task on their phones, I feel like a complete luddite. I can’t find anything, and every poke or scroll seems to unlock the wrong thing; the irony is not lost on me.

I never questioned my loyalty to the iPhone...until I saw a commercial for the Samsung Galaxy Z Flip last year. While it certainly didn’t hurt that said commercial featured BTS, I was ultimately lured to try the phone because of its foldable screen.

It reminded me of my first cell phone: a palm-sized Sprint that I shared with my dad when I got my driver’s license. A petite phone that snapped open and made a satisfying clap when you shut it. A phone that fit into every purse and pocket without question.

After years of carrying what was essentially a small tablet, I wanted something that was a wee more portable. And as luck would have it, I had the chance to take the Samsung Galaxy Z Flip for a test run.

There's a bit of a learning curve

Admittedly, it took some playing around to familiarize myself with the Android OS, but once I got the basics down, I enjoyed the benefits of this foldable phone. 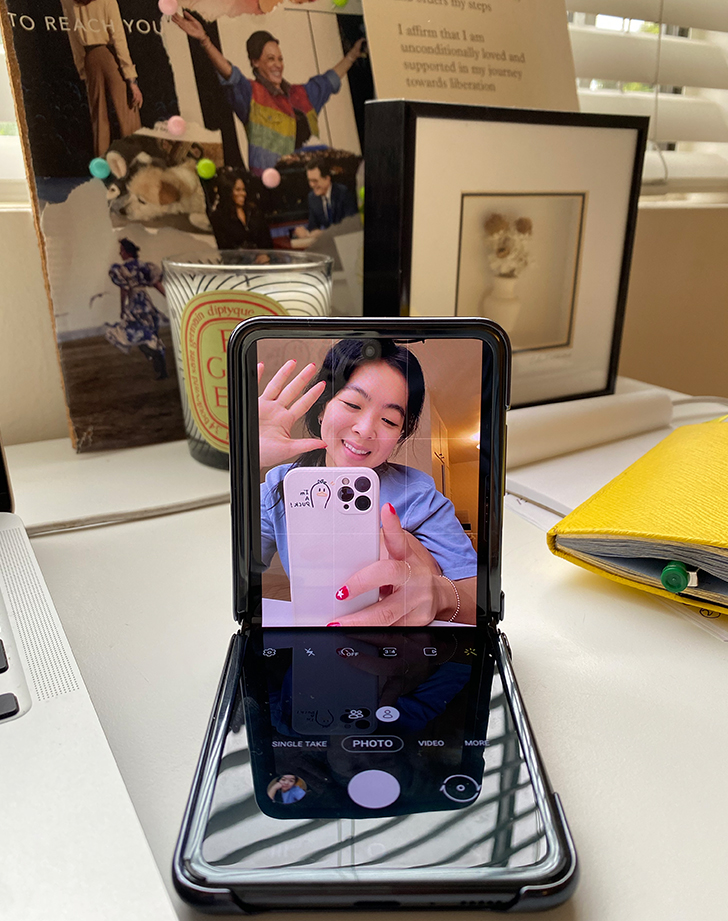 For starters, it acts as its own tripod, so you can easily plop it onto any flat surface and it’s self-standing. This has proven to be useful during video calls because I no longer have to prop my phone against something or hold it up myself. It’s also handy for snapping photos of yourself that would normally require another person or *shudders* a selfie stick. Simply put, I feel like less of a tool taking selfies with this phone because it’s not as ostentatious as the aforementioned stick or even an outstretched arm. 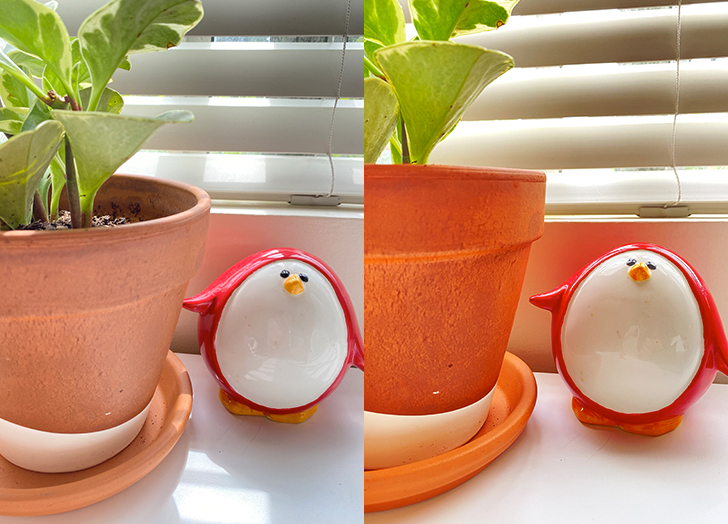 Samsung Vs. Iphone: ﻿here's How The Photos Compare

The photo quality is comparable to my iPhone 11 Pro at 12 megapixels, which might not mean much in words, so here’s a side-by-side photo I took of a plant and penguin ceramic my best friend made me above. Samsung on the left; iPhone is on the right.

As you can see, the overall clarity and quality of the photos are similar, though there is a difference in tone. 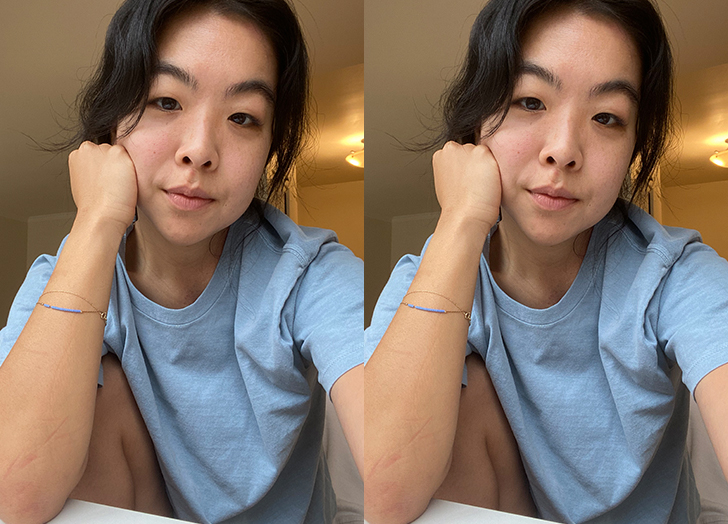 This difference in tone is far less apparent in the frontward facing camera, however. Again, I will note that taking this same selfie (with a pimple patch on, no less) was much easier to accomplish with the Samsung phone, thanks to its self-standing flex mode.

It's smaller, and lighter

And since we’re comparing the two phones, I’d like to call out that the Samsung weighs 183 grams, while the iPhone comes in at 188 grams. (That's approximately 6.5 and 6.6 ounces.) It’s a small difference, but every bit counts when you carry an overstuffed bag and walking is your preferred mode of transportation. 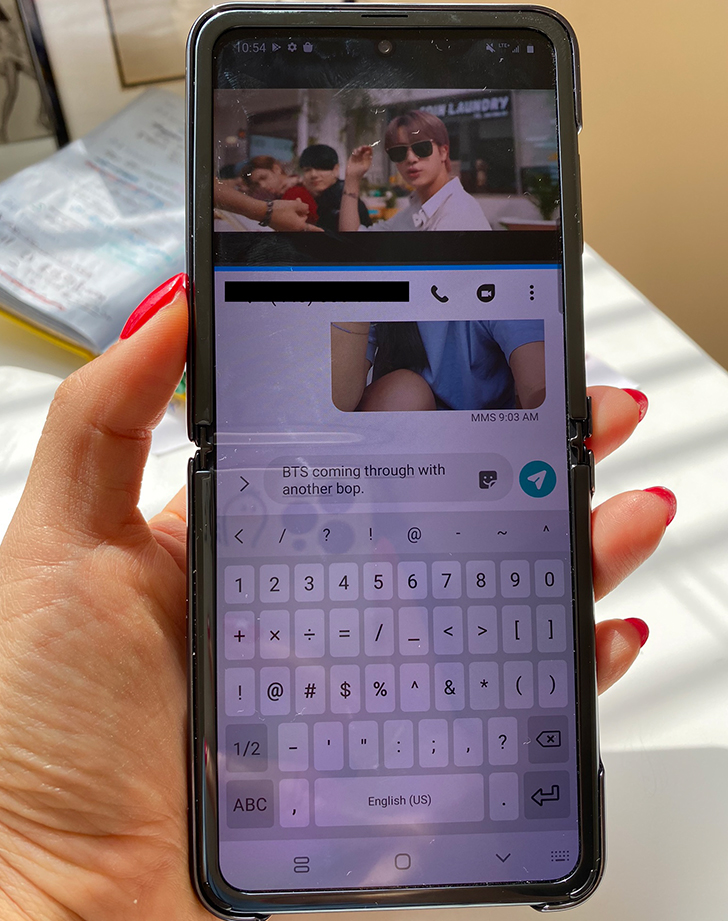 There's An Added Bonus To The Flip Feature

The foldable design also helps with multitasking because it gives you the option to use the top and bottom half of the phone as two separate screens. I found this feature to be especially handy when I want to say, read the news (or a story about the best gel nail polishes) on the top screen, while doing a quick scroll of Twitter on the bottom. Or watch a YouTube video, while texting a friend back without having to toggle between apps.

Foldable phones are a blast from the past, but I dare say they’re the way of the future. You still get the larger display screen that, let’s face it, our eyes have adapted to, but you can easily snap it shut to save valuable pocket space whenever it’s not in use. And it makes multitasking and taking photos on your own so much easier (though this may put a few Instagram husbands out of business).

Jokes aside, if you’re looking to upgrade your phone, now is a good time to consider making the switch to a foldable. Samsung just released a newer version of the Z Flip at a slightly more palatable cost than its predecessor—just under a grand (which, to be clear, is still a small fortune), but on par with the starting cost of a new iPhone 12 Pro.