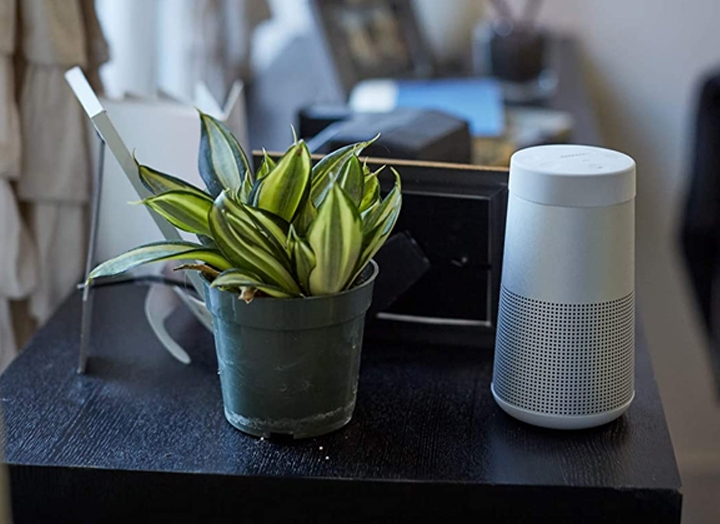 There’s not a lot that feels predictable about 2020. Music, though? My beloved Hamilton soundtrack sounds the same no matter when and where I play it. Phew.

But that’s the problem: The changes of this year have led me to pivot my location more times than I can count. And whether that’s moving to a new city or simply moving a gathering from indoors to out, music is a must-have, but the typical stereo setup or smart speaker is tethered to the wall.

Enter the Bose Soundlink Revolve, a portable bluetooth speaker that seamlessly pairs with apps like Spotify, not to mention Google Assistant or Siri. Setup is simple: Voice prompts talk you through every step and you can have up to two different devices connected at the same time (ideal for when you want to toggle back and forth between two phones...and two sets of playlists).

Still, what really makes this speaker sing is the sound quality and portability. During a pandemic year, this 360-degree stereo drowned out the toughest of days, whether I was piping a French café-themed playlist into my morning to channel some calm or cranking the new (and oh-so-good) Fiona Apple album to de-stress. I carried it easily with me to a socially distant outdoor picnic with pals, but also from the kitchen to the bathroom as I caught up on one of my fave podcasts. (I should mention it’s water-resistant, too, so totally bathroom-friendly—another perk.) The ease of use combined with its elegant mix of base and treble makes it feel way fancier than its price.

The battery life is first-class, too. I got 12 hours out of a single charge—more than enough to make it through the music-centric parts of my day. And did I mention it’s on sale as part of Amazon Prime Day?!

Bottom line: Even a pandemic year needs a soundtrack. And this speaker delivers over and over again.

We Dropped, Selfie’d and Stress-tested the Google Pixel 6a, so You Don’t Have To

HP Instant Ink Can Detect When Your Printer’s Low on Ink (And Send Cartridges Before You Run Out), but Is It Worth It?

8 Trends That Will Be Everywhere This Fall

If There's Any Amazon Fitness Tracker You Need, It's This One (And It's Under $50 Through August 6)

Need a New Laptop? This Is the Best Buy Chromebook Sale You've Been Waiting For