Average (0)
These za’atar buns happen to be totally vegan (although you wouldn’t know at first bite). 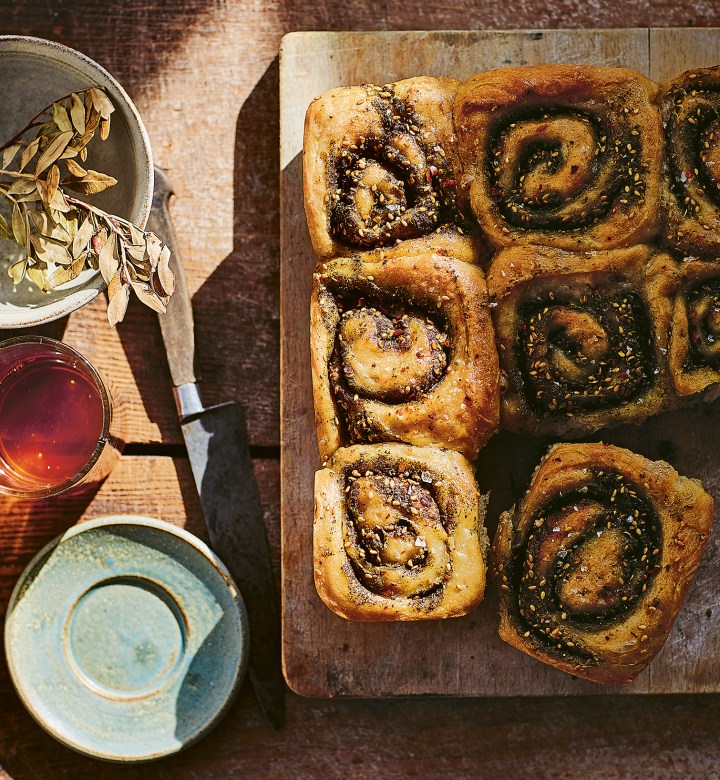 Want to know a secret? Vegan baking can be easy and delicious. Take these savory little za’atar buns as a prime example. They’re from Nistisima by Georgina Hayden, a new vegan cookbook that celebrates Mediterranean and Middle Eastern cuisine, and they’re changing what we know about going plant-based.

“These swirled buns are my twist on a manoushe, a traditional Levantine morning flatbread that is topped with olive oil and za’atar,” Hayden writes. “They are one of my favorite breakfasts.” Serve them alongside a plate of crisp cucumbers and radishes, or add a side of labneh for dipping if you’re not vegan.

As she explains, you can use a store-bought za’atar mix, but it’s very easy to make your own (and if you need a recipe, she has one in her book).

4 cups plus 2 tablespoons (500g) bread flour, plus extra for dusting

1. In a liquid measuring cup, add the sugar and yeast and whisk in 1 cup (275ml) of warm water, then set aside for a couple of minutes. Place the flour in a large mixing bowl and whisk in the salt, then make a well in the center. Mix in the yeast mixture and 2 tablespoons (25ml) of the olive oil until well combined—add more water if needed; you want a moist dough.

2. Transfer the dough to a flour-dusted surface and knead until smooth and elastic, 8 to 10 minutes. Wash and dry the mixing bowl, then lightly oil it. Return the dough to the bowl, drizzle with a little more oil, then set aside to proof until doubled in size, 1 to 1½ hours (this will depend on how warm your kitchen is).

3. When the dough has risen, turn it out onto a clean surface, knock the air out and roll into a rectangle about 10-by-16 inches. Brush with a layer of olive oil and evenly sprinkle over the za’atar and pul biber, leaving a ¼-inch border around the edges. Pat the spice mixture gently into the dough with the back of a tablespoon. Starting with a short side, roll the dough up as tightly as you can. Trim off the uneven excess bits at the end. Slice the dough into 9 pieces. Pour enough oil to just cover the base of a 9-inch square cake pan or baking dish and pop in the slices, swirl facing up. Cover and set aside to proof again until the rolls double in size, about 30 minutes.

4. Meanwhile, preheat the oven to 400°F. When the buns have roughly doubled in size, bake until golden, 25 to 30 minutes. As soon as they come out of the oven, drizzle the remaining olive oil on top and let it absorb into the buns for 10 minutes before serving.