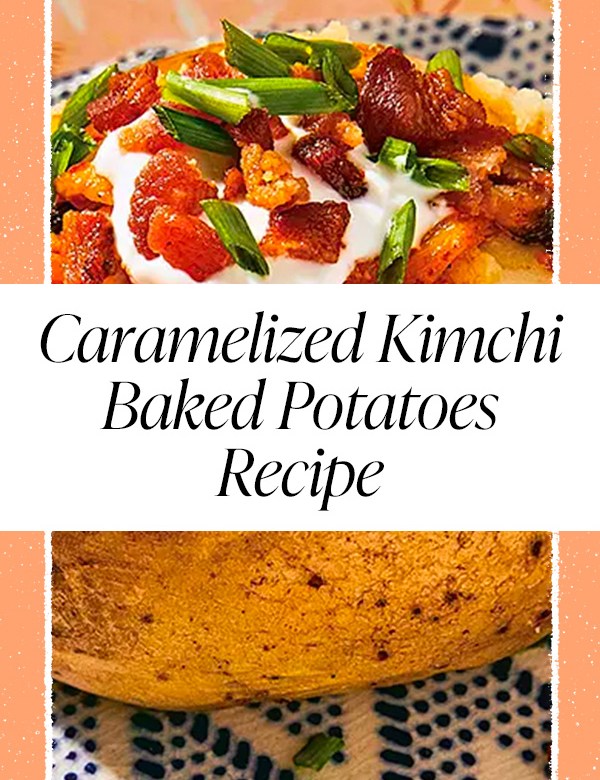 A good baked potato is a no-brainer (crowd-pleasing! basically makes itself!), and it all hinges on the toppings. Sour cream is classic…but a bit of a snooze. These caramelized kimchi baked potatoes—from Eric Kim’s new cookbook, Korean American—are equal parts unexpected and delightful, plus, they come together with less than ten ingredients.

“If sugar on baked potatoes sounds weird to you,” he writes, “then it’s likely you haven’t tried it.” The secret ingredient comes from Kim’s mother, Jean. As he explains, it adds balance to the tangy caramelized kimchi and nutty sesame oil.

“My mother loves this baked potato and so do I,” he continues, “not least because it feels like a full meal. You could serve it alongside a side salad or just eat it as is.”

2. Arrange the potatoes on a sheet pan and bake until fluffy and tender on the inside (when checked with a paring knife) and crispy on the outside, 55 minutes to 1 hour.

3. Meanwhile, in a medium skillet, fry the bacon over medium-high heat until crispy, about 4 minutes. Use a slotted spoon to transfer to a paper-towel-lined plate to drain. Set aside.

4. Drain all but about 1 tablespoon of the bacon fat from the skillet. With the pan still over medium-high heat, add the sesame oil and carefully nestle in the kimchi (it may splatter). Season with a pinch of sugar. Stirring occasionally, cook until the kimchi is caramelized and fragrant, about 3 minutes. Set aside to cool slightly.

5. When the potatoes are done, let them cool slightly before handling. Cut a lengthwise slit down the center of each potato and gently press the two ends together with your fingers to widen the slit. Use a fork to fluff up the inside of each potato.

6. To assemble, first sprinkle some more sugar into each potato. Then top with the mozzarella, caramelized kimchi, sour cream, cooked bacon pieces and chives.