‘True Detective’ Season 3, Episode 3 Recap: The Man with the Scar

Last week, HBO blessed us with not one, but two new episodes of True Detective. And now, the popular series is back with a third episode that (sadly) left us with more questions than answers.

Previously on True Detective, when Wayne (Mahershala Ali) ended up on Shoepick Lane—that wasn’t a flashback, at all. Nor was it a fever dream. Wayne actually drove to Shoepick Lane in his pajamas and forgot how he got there or why. “I went up there for a reason, I just can’t remember,” Wayne says, who also doesn’t remember how he got home from dinner that night. The doctor says his scan doesn’t present any changes, but things sure ain’t good. 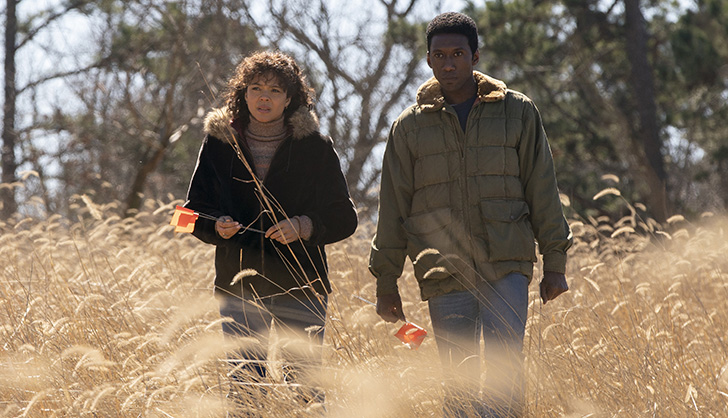 In 1990, Wayne is sitting outside the Oklahoma Walgreens, staking out the last place Julie was seen, with his wife, Amelia (Carmen Ejogo). This case has always been at the center of their lives. It’s how they met, it’s the subject of the book she wrote, it’s their mutual obsession—but it’s not doing them any favors as a married couple. Amelia suggests checking into a motel to drink and have sex all night, instead of staring at the entrance of a drugstore. “That would be great,” says Wayne, but makes no move to put this plan into motion.

They now know that Julie’s prints appear on the counters and shelves in the main area, but don’t know if she was a customer or the robber of the drug store. Amelia hatches a plan to dress up all sexy and convince the local police to tell her more about what they’ve discovered. Wayne seems unconvinced, but at least her fantasy inspires him to take his wife to the motel. 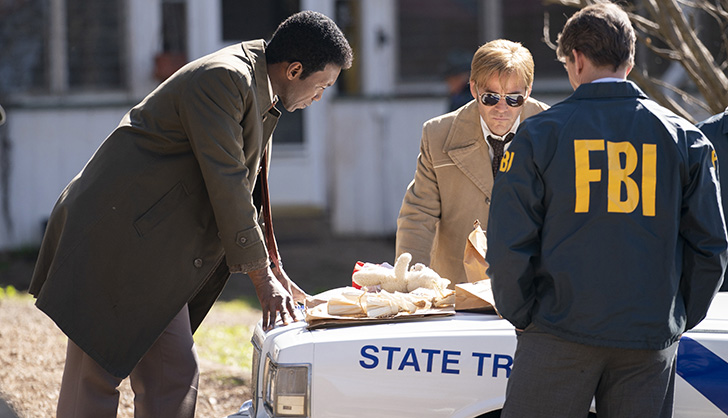 Back in 1980, Wayne and Roland (Stephen Dorff) feel a need to go back over all the evidence they’ve discovered so far. They’re convinced that the truth is staring them in the face. For example, the Purcell kids said they were going to play with their neighbor, but the kid with the puppy said they didn’t have plans to get together. Why were they lying?

“Wayne had the idea them kids were telling stories, and he was correct,” says Roland in 1990, now a lieutenant. “You all fucked a good detective there,” he adds pointedly. Apparently, Roland tried to get Wayne promoted several times, but the request was blocked. Why?

In 1980, Wayne and Roland speak to the kid Will and Julie said they were visiting the day they disappeared. Although the Purcell kids told their parents this boy is who they play with after school, it turns out these three don’t have a standing appointment. In fact, Ronnie doesn’t go out after school at all, and the Purcells have been going out three, four times a week under false pretenses. 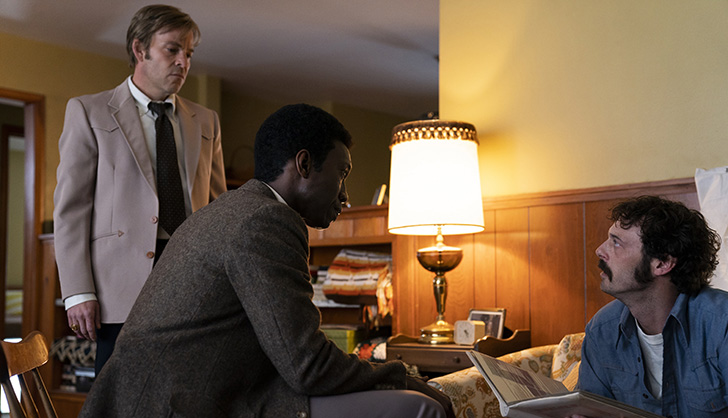 Wayne and Roland decide it’s best to go through the house again. While searching the Purcell home, the camera pans back to the drawing of a couple getting married. Wayne catches Lucy (Mamie Gummer) staring at him as he goes through Will’s bedroom. (This family is all kinds of unhinged.) Roland finds a hand-drawn map of the woods while Wayne discovers little notes that say: “Don’t Listen,” and “I’ll always keep you safe.” He also discovers a tote bag from Hoyt Foods. It’s where Lucy used to work a few years ago before she started working at the Sawhorse, the town’s local bar.

Probably because Wayne is dealing with some kind of trauma from 1980. A decade later, Wayne is at Walmart, buying toilet paper with his kids, when he loses his daughter somewhere in between the aisles. When he finds Rebecca, he takes out a decade worth of angst and anger on the poor girl, who just stopped to eat some food samples and got left behind. (Talk therapy, Wayne. Talk therapy.)

As promised, Amelia gets dressed up to flirt her way to more information from the Sallisaw cops about Julie’s fingerprints. She tells them it’s to update her book, and it works like a charm. They tell her no prints were found outside the store, only inside, although that may be for lack of investigating the crime scene properly. 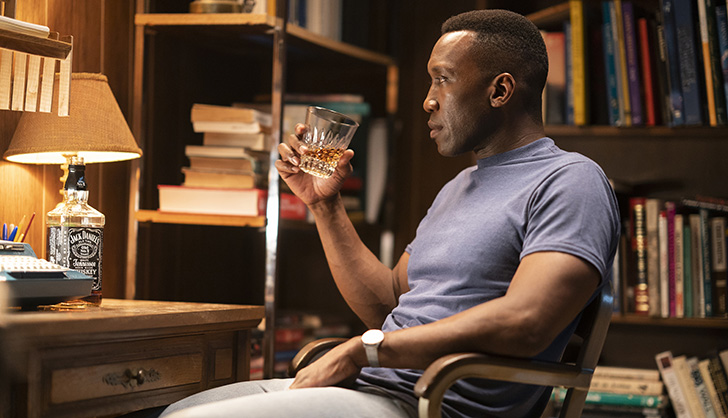 In 1980, the owner of Hoyt Foods, who started a foundation after his daughter died, offered a reward for information leading to the arrest of the murderer, because Lucy used to work there. It leads to all kinds of crazies calling in, and Wayne and Roland think that’s a move that should have been coordinated with law enforcement. The Hoyt Foods rep says they coordinated it with the county prosecutors’ office—who seemingly are leaving Wayne and Roland out of such matters, much to their chagrin.

Later that day, Wayne awkwardly tries to flirt with Amelia as they canvass the woods for a still-missing Julie Purcell. “You think maybe we should have dinner some time?” he asks her. Guess romance isn’t dead. Oh, except in 1990, where Wayne is furious at his wife for going out to dinner with a detective and coming back all giddy that she managed to gather information about the case. While Wayne makes the argument about Amelia being an absentee mother, it’s obvious this is about his own shortcomings in solving the case.

In 1980, the search continues and Wayne discovers some playing dice in the foliage. He also finds a bag full of toys and more of those creepy dolls, hidden in a small cave. And blond hair clinging to a rock. And blood! It’s a buffet of overlooked evidence that looks surprisingly pristine, considering it’s been a week since they found Will. Does it ever rain in Arkansas?

Wayne and Roland also find a new person to question, who hasn’t been talked to yet. Although the farmer they’re questioning claims otherwise, saying a man in a suit with a badge came to speak to him the day after the kids went missing. He’d seen the kids a few times, coming down the road into the woods. He’s also seen a nice brown car with a black man and a white woman. But not the same day as the kids, he says.

The sedan is a recurring observation from people in town, although it apparently is not included in any reports. They’ve observed a man with a scar and a suit, by the cul-de-sac where the kids play near Devil’s Den. The TV producer in 2015 wants Wayne to admit there were serious flaws in the investigation from the beginning. But what is this really about, lady?

Remember how last week Wayne said, “You know what happened with him,” in regards to Brett “Trash Man” Woodard. That story line gets furthered when the lovely town folk decide they’re going to teach Woodard a lesson for speaking to their children. The men beat him up and threaten his life at gunpoint. An angry “Trash Man” rushes home to his shed and pulls out something he’s hidden in there. It’s a bulky green bag that could easily contain a small child. 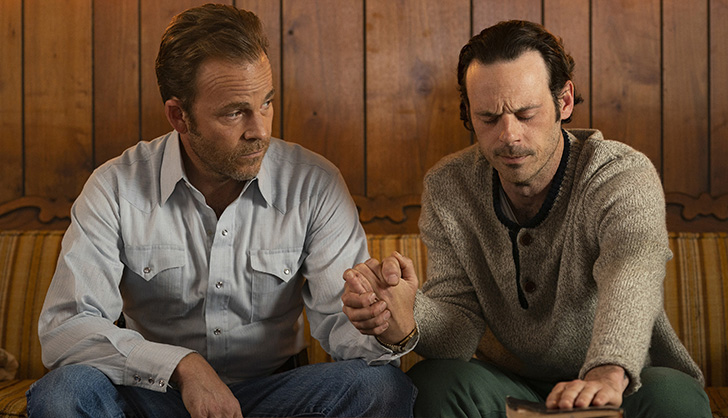 In 1990, Roland pays a visit to Tom Purcell (Scoot MacNairy), who despite living in a trailer, seems a lot more together now than he did a decade ago. Having heard about his daughter’s fingerprints, he wishes Lucy was around to hear this, but it’s been two years since he brought her body back from Las Vegas. Tom’s been sober for five years—and he has found the Lord.

Current 2015’s Wayne is going over the evidence in his den when a hallucination of Amelia starts taunting him: “You’re worried what they’ll find, what you left in the woods.” Whatever it is, it seems to concern him greatly.

Back in ’80s, the Purcell parents don’t recognize any of the toys in the bag. “I didn’t buy them,” Tom says. Wayne starts flipping through a baby album and finds a picture of Will clasping his hands for his first communion as he did in the cave where he was found dead.

In 1990, Roland and Wayne reunite for the first time in years. Roland is about to form a new task force, of which he will be in charge. The two exchange some heavy barbs in the bar, but the truth is, Wayne needs to get to the bottom of this if it’s the last thing he does.

Is Will not the Purcell’s real child? And will we ever find out what happened to Julie? Guess we’ll have to wait until True Detective returns next Sunday, January 27, at 9 p.m. on HBO.