‘This Is Us’ Season 4, Episode 7 Recap: Romeo & Juliet Skip School

Last week on This Is Us, Kevin (Justin Hartley) and Cassidy (Jennifer Morrison) finally got together, Kate (Chrissy Metz) and Toby (Chris Sullivan) got past a snag in their marriage, and Randall (Sterling K. Brown) figured out how to convince Councilman Wilkins (William Allen Young) to give him another chance.

Read on to find out what happens in This Is Us, season four, episode seven. 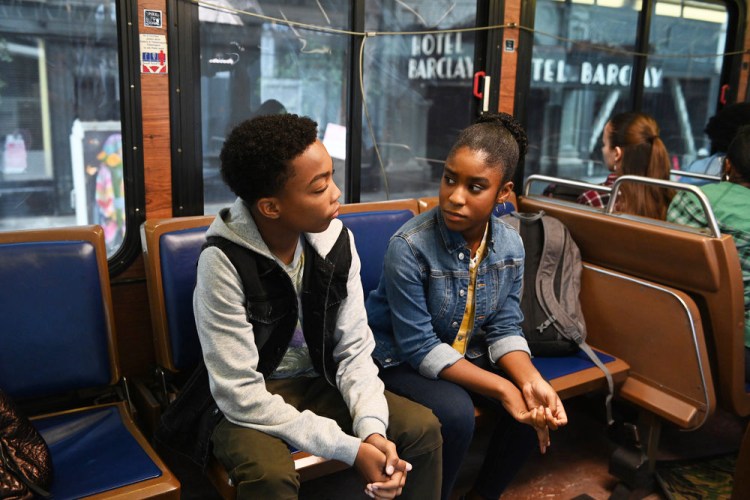 We open on Deja (Liberty Ross) and Malik (Asante Blackk) riding the bus to school. He asks if she’d like to get a Philly cheesesteak after classes let out. She admits that she hasn’t really had anything other than touristy food since arriving in Philadelphia, nor has she seen the sights. So, Malik asks her to skip school with him and she reluctantly agrees. They get cheesesteaks, explore all that Philly has to offer, get to know each other better and even—gasp!—hold hands. All the while, Deja remembers her first trip to Philadelphia when she still lived with her mother. It becomes too much for her when Malik takes her to his favorite spot. She gets up and leaves abruptly. 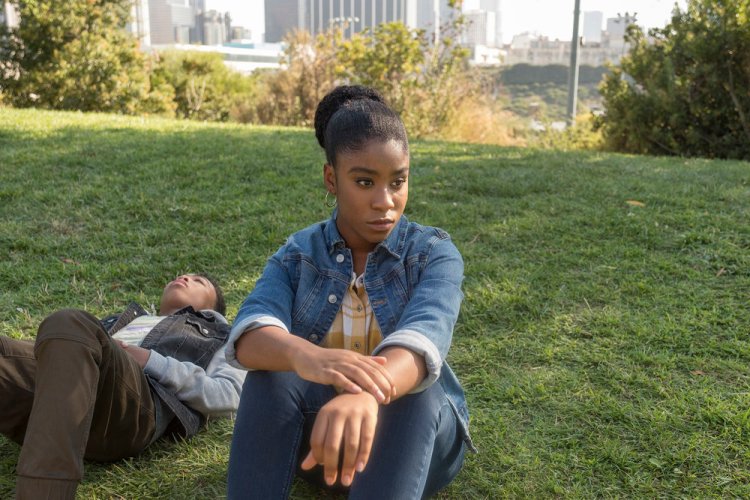 Malik follows her and asks what’s going on. Deja admits that she’s never liked anyone before and that Malik is a smooth talker. She’s worried if she can trust him or not. She tells him she has plans for her life and he has a baby. It’s just too intense for her and she wants to go back to school. But instead, Malik opens up to her about his relationship with his baby mama, Jennifer, and says he’s not a player. They continue their day of exploring Philly and eventually Deja kisses him.

Although Deja and Malik have a wonderful day together, the principal calls their parents and tells them the kids skipped school. Randall and Beth (Susan Kelechi Watson) are furious and ground Deja for the next decade. Trying to make lemonade out of lemons, Beth invites Malik’s family to dinner so they can get to know each other.

On the way to the Pearsons’ house, it becomes clear that Malik’s mom, Kelly (Marsha Stephanie Blake), blames Deja for their ditch day. They arrive at the Pearsons’ and the mood is a bit tense, especially when Annie (Faithe Herman) makes the offhanded comment that “it’s crazy” that Malik has a baby. Beth offers to give them a tour and Malik’s dad, Darnell (Omar Epps), insinuates that the Pearsons are bougie. Beth admits that maybe they are.

The guys handle dinner while Beth gives Kelly a tour of the place. After Darnell helps Randall with his “cremated chicken,” his perception of him changes and he starts to think Deja and Malik dating might not be such a bad thing. Darnell tells him that Malik takes full responsibility for the ditch day and that it won’t happen again. He and Randall look at the kids and Randall says, “One day you’re their biggest idol. The next day someone comes by and they’re their entire world.”

Meanwhile, upstairs, Beth’s tour with Kelly isn’t going as well. Kelly asks how long Beth and Randall have had Deja and says it must be hard raising someone else’s daughter. Beth insists that Deja is their daughter and Kelly retorts that Deja’s mom was a drug addict and she lived in a car. “That’s a lot of baggage,” she adds.  Beth claps back that Kelly must have a tough go of it, too, since she’s raising her child’s child. (Yikes). Just then, Randall calls upstairs that dinner is ready and Beth rushes downstairs. She pulls Randall into the pantry (where she hides an emergency bottle of wine) and says she no longer wants to get on the same page as Malik’s parents. She’s mad that Kelly blames Deja for their ditch day.

They sit down to dinner and things get progressively more uncomfortable when Kelly insists that they say grace, Malik’s baby cries, and Darnell says he didn’t vote for Randall. After Tess (Eris Baker) tries to step in and help soothe the baby, Beth sends the kids upstairs and tells the adults it’s time for some real talk. Beth calls Kelly out for blaming Deja and says she’s one to judge. Beth then tells them that she and Randall don’t want Deja dating Malik because he has a child. Darnell steps up and says that they can judge Malik, or they can see him for who he’s become. Deja takes that as her cue to rush in and apologize for ditching school and sneaking around with Malik. But, she says she really likes Malik and spending the day with him was the best day she’s ever had.

After dinner, Beth and Randall tell Deja that she’s grounded for a week, but they are OK with her seeing Malik. But, they tell her, they want to get to know him better. She shares a little bit about him and by the smile on her face, you can tell she’s falling in love. 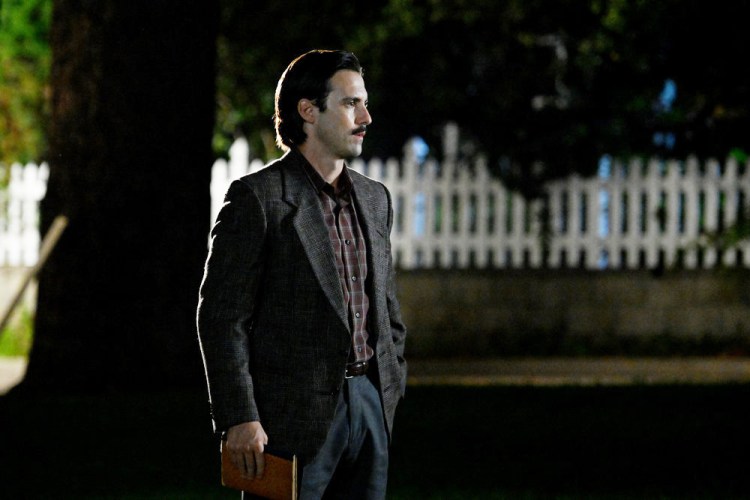 In the past, Jack (Milo Ventimiglia) and Rebecca (Mandy Moore) prepare to have dinner with Randall’s (Lonnie Chavis) teacher, Mr. Lawrence (Brandon Scott). Jack is clearly nervous and puts on a sports jacket for the occasion. Rebecca, naturally, makes fun of him. Meanwhile, Mr. Lawrence selects a book of poetry to bring to Randall and his wife, Trish (Skye P. Marshall), makes fun of him for being a pot-stirrer.

When Mr. Lawrence and Trish arrive at the Pearsons’, Rebecca gives them a tour. In Randall’s room, Mr. Lawrence realizes that he’s copied his book organization technique. Kevin (Parker Bates) jokes that Mr. Lawrence is a grown-up Randall, Jack and Rebecca feel awkward and they all head downstairs for dinner.

While they eat, Randall and Mr. Lawrence go on about dinosaurs and Jack starts to feel left out. Mr. Lawrence then mentions an African American cultural festival in the area and Randall asks if he can join him next time. Feeling jealous, Jack says they’ll all go as a family instead, while simultaneously making a dig at Mr. Lawrence. 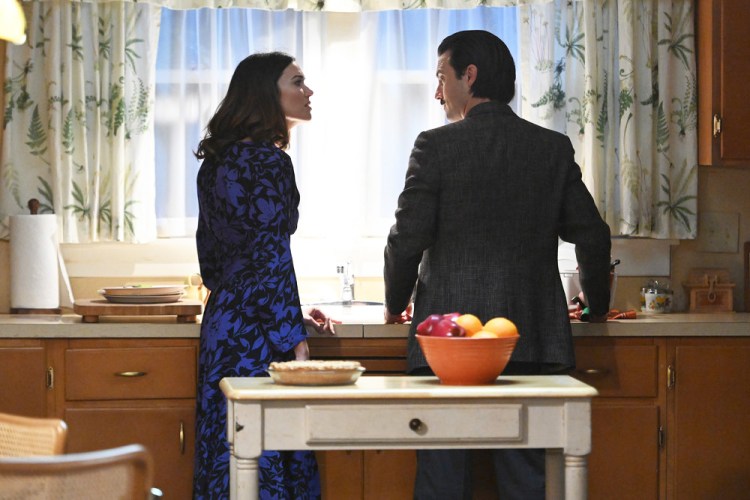 Afterward, Rebecca and Jack clear the table and Rebecca calls him out in the kitchen. She tells him to stop competing for Randall’s affections because he’ll always win. But, if he makes Randall choose between his dad and Mr. Lawrence, he’s going to cause a rift between himself and his son.

They say goodnight to the Lawrences, but before they leave, Jack apologizes and so does Mr. Lawrence. Jack admits that he felt threatened by Randall’s interest in Mr. Lawrence and that his questions about his race are becoming more complicated. Mr. Lawrence says he was excited to be there for Randall, but Jack needn’t be threatened by him. After all, Jack is the one who will be around the rest of his life. He gives Jack a Langston Hughes book to try and help him better understand. Later Jack gives it to Randall and tells him he’s glad to have met his favorite teacher. Randall recites his favorite poem, “I, Too,” to Jack and tells him they can read it together. 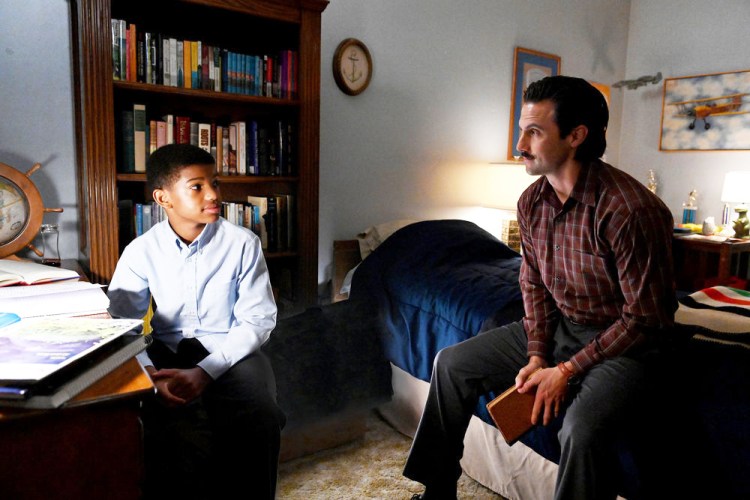 Now, that was a feel-good episode. Tune in next week when This Is Us returns with season four, episode eight, on Tuesday, November 12, at 9 p.m. ET/PT.

Every ‘This Is Us’ Season 4 Recap