The Official Royal Line of Succession Has Finally Been Updated

With all the royal babies being born lately, it’s hard to keep up with the British line of succession. And by the looks of the official list on the royal website the last few weeks, it’s been hard for the family to keep up as well, considering they just fixed a major mistake. Allow us to explain.

Although Princess Beatrice and her husband, Edoardo Mapelli Mozzi, welcomed their first child together last month, it took until now for the baby girl to be added to the line of succession on royal.uk. The newborn officially holds the number 11 spot (which was previously occupied by her aunt, Princess Eugenie). Now that the child is included, Eugenie has shifted to the 12th position and her son, August Brooksbank, moved to the 13th spot. 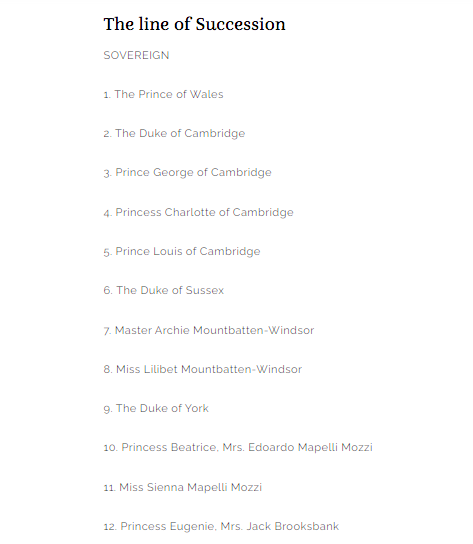 So, why did it take so long for the newborn to be added? ﻿We honestly don't know. We assumed the royal fam was waiting for the child’s name to be announced. (If you didn’t know, when Buckingham Palace released an official statement revealing that the 33-year-old royal gave birth to a baby girl, they made no mention of a moniker for the newborn.)

“Her Royal Highness Princess Beatrice and Mr Edoardo Mapelli Mozzi are delighted to announce the safe arrival of their daughter on Saturday 18th September 2021, at 23.42, at the Chelsea and Westminster Hospital, London,” the message read. “The baby weighs 6 pounds and 2 ounces. The new baby’s grandparents and great-grandparents have all been informed and are delighted with the news. The family would like to thank all the staff at the hospital for their wonderful care. Her Royal Highness and her child are both doing well, and the couple are looking forward to introducing their daughter to her big brother Christopher Woolf.”

However, earlier this month, the couple finally announced their daughter’s name: Sienna Elizabeth Mapelli Mozzi. And...still there was no update.

“Her Royal Highness Princess Beatrice and Mr Edoardo Mapelli Mozzi have named their daughter Sienna Elizabeth Mapelli Mozzi,” they captioned a photo of Sienna’s footprints. “The couple have said, 'We are all doing well and Wolfie is the best big brother to Sienna.’”

Though we expected baby Sienna to be promptly added to the LOS, it ended up taking over two weeks to see an update. Hey, better late than never.