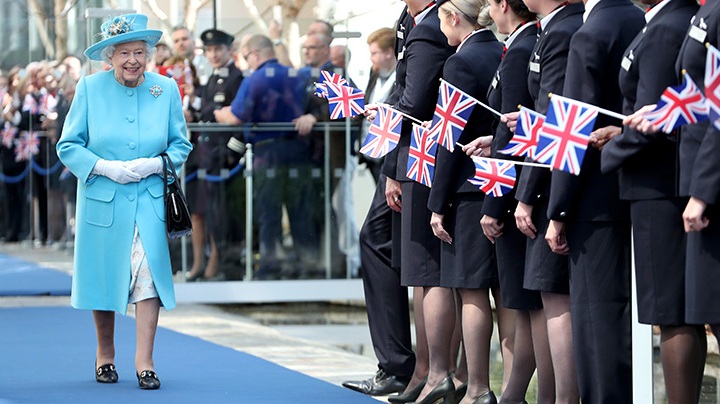 It's been a busy week for Queen Elizabeth. After visiting the RHS Chelsea's Back to Nature Garden with the Duke and Duchess of Cambridge and hosting a garden party at Buckingham Palace (for 8,000 people, no big deal), Her Majesty was just spotted at Heathrow.

No, she's not getting out of dodge for the weekend; she was there to visit the headquarters of British Airways in celebration of the airline's 100th anniversary.

Wearing a sky blue coat by Stewart Parvin with a matching silk dress and hat by Angela Kelly, the queen's outfit was perfectly coordinated with the blue carpet British Airways rolled out in honor of her arrival.

While there, per People, she met with employees who volunteer for the organization’s community program, Flying Start, the global charity partnership between British Airways and Comic Relief, which aims to give back to children in poor communities.

She also visited the headquarters's Heritage Center, which has a display that features her first ticket for a long haul flight after her coronation, when she and the Duke of Edinburgh visited Jamaica in 1953.

According to the Daily Mail's royal correspondent Rebecca English, the queen cracked a few jokes about her many years of flying. "Having travelled so much they tend to get a bit muddled," she mused. English says the queen was also shown a photo of herself christening a plane with cider, to which she exclaimed, "Cider, not Champagne?"

We knew she was our kind of lady.