Everything You Need to Know About Princess Diana’s ‘Revenge’ Dress 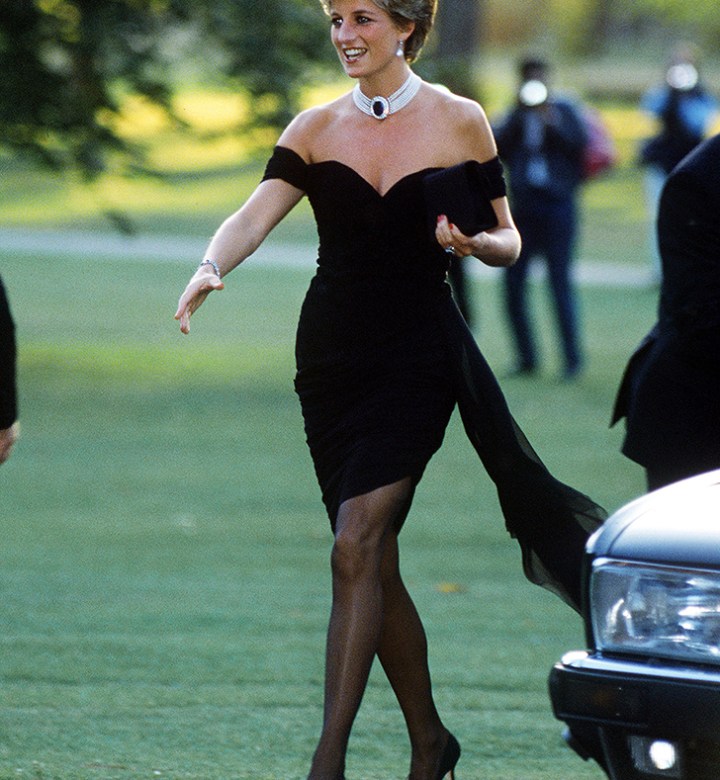 If we’ve learned anything from the royals, it’s that the fashion they choose to wear always (always) sends a message. Enter Princess Diana’s ‘Revenge’ dress, one of her most iconic ensembles worn in June 1994 to an event at the Serpentine Gallery. Was it a coincidence that her bodycon, off-the-shoulder LBD with an asymmetrical hemline and chiffon train that caught the wind made headlines? After all, Diana’s style was frequently front-page news. But there’s more to the story than that. Here, all the details behind Diana’s iconic look and how she came to the decision to wear what is now famously called the ‘Revenge’ dress.

1. She Wore It the Same Night Prince Charles Confessed to Adultery on National TV

In 1992, Prince Charles and Princess Diana formally separated, but it wasn’t until 1994 when Prince Charles went on national television and publicly admitted that he’d been unfaithful to Diana via his ongoing relationship with Camilla Parker-Bowles that the royal gloves really came off. The ITV documentary in which Jonathan Dimbleby interviewed Charles had the heir to the throne explaining that he remained faithful within his marriage to Diana until “it became irretrievably broken down.” (You can peep the exact moment he shares this at the seven-minute mark in this video clip.) It was on this same day that Diana—who already had plans to attend a gala event hosted by Vanity Fair at the Serpentine Gallery in London—stepped out wearing what is now referred to as her ‘Revenge’ dress.

2. She Almost Chose a Different Dress

It’s safe to say that most people would have curled up in a ball upon hearing their ex-spouse confess to cheating on them in front of the world, but for Diana, it was business as usual—with one minor change: her outfit. The original idea was to wear a Valentino dress to the event, but when her look was accidentally leaked to the newspapers by the brand, she made a last-minute switch. The ensemble she chose? The now-famous ‘Revenge’ dress by designer Christina Stambolian. It was a look she’d actually kept in the back of her closet for nearly three years because she felt it was too daring, according to Stambolian. At last, she’d found the right occasion to bust it out.

3. The Choker She Paired It With Also Had Significance

The dress wasn’t the only part of Diana’s outfit that turned heads. The sapphire-and-pearl choker was bold in and of itself given the fact that the Queen Mother had gifted her the brooch part on July 29, 1981, the day Diana walked down the aisle to marry Prince Charles. (Diana later had it mounted on seven strands of pearls to make it into a choker.) Of course, the choker may have just been a piece of jewelry that Diana really liked—she did wear it on numerous occasions, including to the White House in 1985 when John Travolta spun her around the dance floor and again to the Met Gala in New York City in 1996. But it was also a nod to her nuptials on the day her spouse admitted to infidelity, so it’s hard to say.

4. It’s Safe to Say Charles Wasn’t the Only One Making Headline News the Next Day

Intentional or not, when the newspapers came out the next day, Prince Charles—and the earth-shattering revelations from the ITV doc—weren’t the only thing worthy of the front page. A smiling and confident Diana was larger-than-life on the front page, too.

Two months before Diana’s untimely death in a car crash in Paris in 1997, at the urging of Prince William, she put 79 of her dresses up for auction at Christie’s in New York City with the funds raised benefitting cancer and AIDS-related charities. It sold for $65,000, according to People.